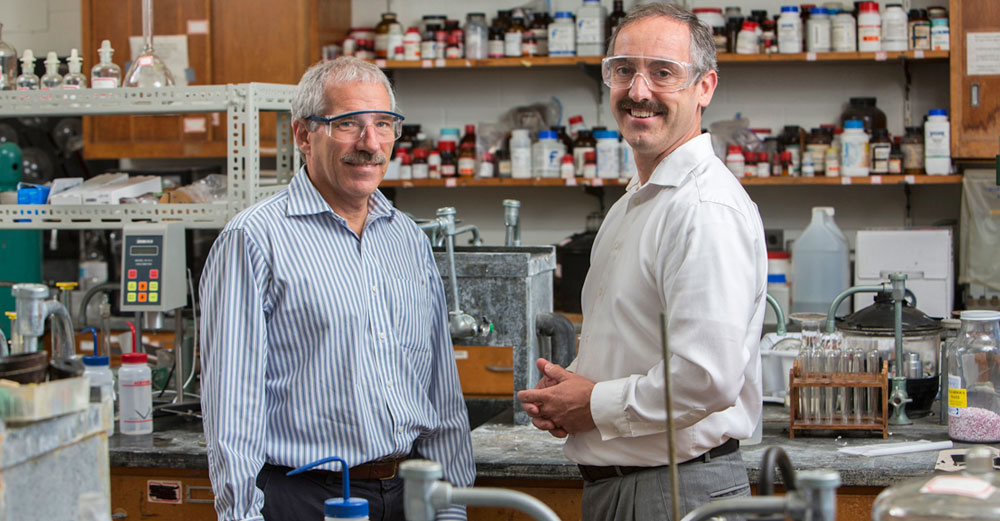 If the cost of cooling a building drops drastically a few years from now, you might have nanotechnology to cheapest cialis thank.

Wayne Jones, professor of inorganic and materials chemistry and department chair at Binghamton University, has won a $50,000 investment from SUNY’s Technology Accelerator Fund (TAF) to help develop low-cost nanomaterials that, when applied to glass, block heat while letting light pass through. Jones invented the technology together with Bill Bernier, research professor of chemistry and materials science, Kenneth Skorenko, who completed his PhD while working in Jones’ lab, and two partners from a local chemical manufacturer.

The university licensed the patent-pending process and materials to ChromaNanoTech, a startup company founded by the inventors. Based in the Binghamton University Incubator, ChromaNanoTech was accepted into the START-UP NY economic development program in February, 2016.

This is Jones’s second investment from the TAF program. In 2014, he received $50,000 to help commercialize a process that he, Bernier and Skorenko had invented to bind organic dyes to nanoparticles of metal oxides. The results are light-filtering dyes that don’t break down in the high temperatures found in industrial production. Infused into polymer pellets, the dyes offer an inexpensive alternative for use in products that involve control of light, such as sunglasses and plasma TVs.

The partners believed—and the 2014 grant affirmed—that their invention held commercial promise. But they didn’t know where the greatest potential lay until 2015, when they completed the NEXUS-NY Clean Energy Seed Accelerator program, backed by the New York State Energy Research and Development Authority (NYSERDA). “Now we’ve identified a specific market,” Jones says. It’s the market for passive solar cooling systems—thin films applied to windows to absorb energy in the infrared spectrum, which carries heat but no visible light. The less heat that 40 mg levitra passes into a building in warm weather, the less need there is for energy-hungry air conditioners.

“We’re focusing this work directly toward that market,” Jones says. “To do that effectively, we need to develop two or three dyes that are in specific wavelength ranges.” The new TAF grant will help Jones and his partners create those dyes. ChromaNanoTech will then scale up the process to make them in commercial quantities.

Today, passive solar systems employ metals such as silver and gold, rather than dyes. The coatings add from $20 to $50 per square foot to the cost of a window, Bernier says. A manufacturer vacuum-deposits one of these materials onto glass and then adds a polymer film that protects the window from scratches.

ChromaNanoTech plans to incorporate its light-filtering dyes into the protective plastic itself. “We can do it for $10 per square foot,” Bernier says. “And in volume, as we develop our production capability, we can get well down into the single-digit range.”

ChromaNanoTech expects to sell these materials for use in both new construction and the aftermarket. In the first case, a window manufacturer would incorporate one of the dyes into its products. In the second, a consumer would buy a roll of heat-blocking film and apply it at home.

“Right now, only high-end homes typically have passive solar treatments for windows that block heat,” Bernier says. The new materials will put such systems within reach of the average homeowner. The retrofit market poses an especially large opportunity, he says. “Given the installed base of housing, commercial buildings and institutional buildings that don’t have these treatments today, we anticipate hundreds of millions of dollars a year in sales.”

Among other things, the researchers will use the TAF investment to hire graduate and undergraduate students to assist in their efforts full time for six months, Jones says. The project also benefits from ChromaNanoTech’s location in the BU Incubator, and the researchers’ access to the university’s Analytical and Diagnostics Laboratory, he adds. “The unique capabilities that those two facilities offer let this whole project get off the ground.”