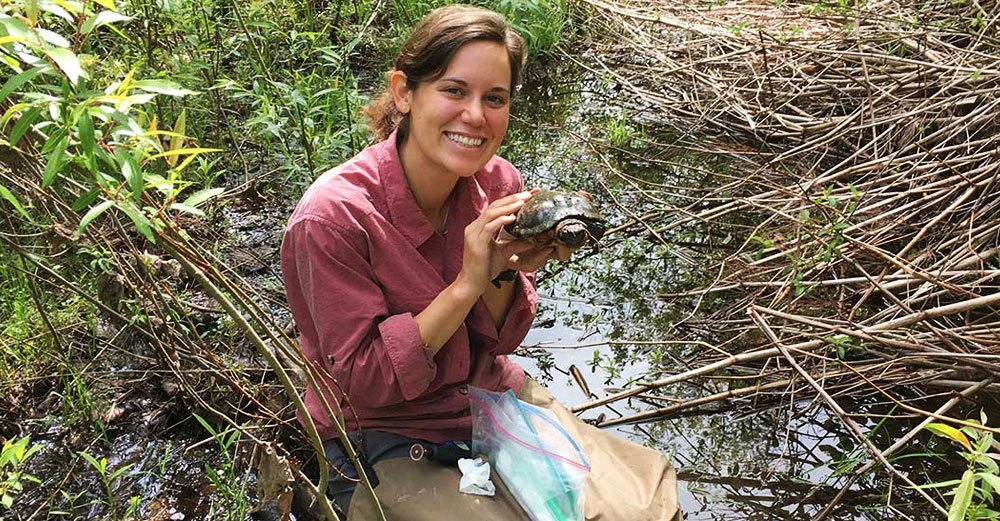 Graduate student Alexandra Vlk has an important mission – to learn all she can about the endangered wood turtle in Oneonta and protect it for future generations.

To do this, the 29-year-old SUNY Oneonta student and Virginia native has spent almost every day since May wading through streams and maneuvering through thick brush, sometimes covered in flies, at her field site – a certain protected natural area in Oneonta – to study population sustainability of the turtle.

She holds a large antenna up and moves it around, carefully listening for the beep that signifies one of her “research organisms” is near.

“I’ve been radio-tracking the turtles, attaching a transmitter to their shell with glue,” Vlk said. “Once I locate them, I take measurements, weigh them, and take blood to get DNA samples.”

The wood turtle is listed as “Endangered” on the IUCN (International Union for Conservation of Nature) red list of threatened species, is listed by CITES (the Convention on International Trade in Endangered Species of Wild Fauna and Flora), and is protected across most of its range.

At the Oneonta site, Vlk has encountered 13 turtles.

You can watch a 1-minute video about her research below:

“I realized it was a larger population than anticipated by being out there everyday surveying and observing them,” Vlk said. “I’ve built three hatchling enclosures and am doing paternity analysis on them to see how many females mated with multiple partners.” Her thesis is titled “Wood turtle nesting ecology: mating behavior and genetic diversity in a disturbed and undisturbed field site.”

Vlk’s research will be bolstered by the prestigious and competitive Hudson River Foundation Graduate Fellowship, which she received several months ago. The grant, which is awarded to just one person per year, will pay for a whole year of Vlk’s research.

“I hope to expand my studies and compile a lot more data along the Hudson,” Vlk said. “I really love research.”

It was a fortunate stroke of serendipity that led Vlk to SUNY Oneonta and the fellowship. Having earned her undergraduate degree in biology from James Madison University, she decided she wanted to further her education and get a master’s.

“I was browsing advisers around the country and I stumbled upon Dr. Elizabeth Bastiaans at SUNY Oneonta,” Vlk said. “I decided to email her and, surprisingly, heard back pretty quickly. We started discussing my interests – I had worked with turtles in my previous job with the National Park Service – and began developing my thesis together.”

Soon after finding Bastiaans, Vlk had another stroke of luck. After learning that Vlk was interested in turtles, Bastiaans mentioned that a previous graduate student at SUNY Oneonta, Alexander Robillard, had also studied wood turtles. Vlk developed her research from there.

“She’s very self-motivated and also really great at solving problems out in the field,” Bastiaans said. “The area she’s working in has very dense vegetation and it can be arduous to navigate. But she is a hard worker.”

And with that work ethic, good results are sure to follow. 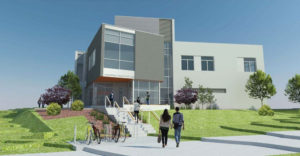 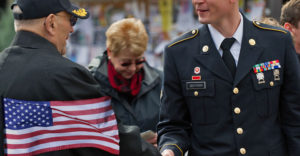