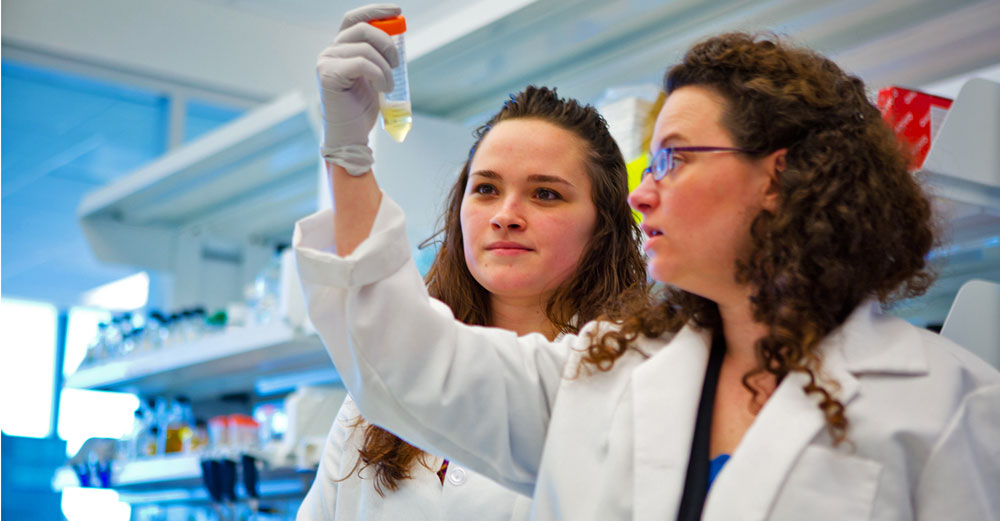 We hear about opioids  a lot these days through the news and social media, and the figures are grim. According to the Centers for Disease Control and Prevention, an average of 130 Americans die  every day from an opioid overdose, and the number of overdose deaths involving opioids was six times higher in 2017 than it was in 1999. With the impact growing exponentially over recent years, the opioid epidemic has drawn great worry from communities throughout New York State.

Researchers on SUNY campuses have taken on those concerns with the goal of bringing a solution to the epidemic at hand. SUNY Health teams at a number of schools are looking into three areas of interest to bring about solutions: preventing opioid overdoses, treating opioid overdoses, and developing a vaccine to help prevent opioid addiction from occurring in the first place.

How can we prevent opioid overdoses?

The fastest way to prevent opioid overdoses is to reduce the amount of opioids being prescribed. At SUNY Downstate Health Sciences University, Dr. Alan Gintzler is researching the development of drugs that tap into the powerful pain relieving effects of opioids produced by the brain itself to treat chronic pain. These new drugs would lessen the need for prescription opioids without compromising chronic pain management. He is also researching ways to prevent the loss of the pain relieving effects of prescription opioids that comes with persistent use. Maintaining the effects would lessen the need to increase dosages, which often leads to addiction.

With this research still in process and opioid prescription still necessary, other campuses are working toward developing methods to prevent misuse. At the University at Albany, researchers have been studying the 2016 National Survey on Drug Use and Health from the Substance Abuse and Mental Health Services Administration to develop a deeper understanding of the demographics of populations most likely affected by opioid usage, and how opioid use correlates with other health concerns, like suicidal thoughts. Keith Chan, the lead author of the study, and four student researchers (Priya Winston, Jeffrey Trant, Mary Moller, and Rubin Jennings) found a higher risk for opioid misuse, specifically leading to suicide or suicidal thoughts, in older adults than in younger adults. These results may lead to innovative new ways to prevent opioid misuse among people with mental health issues. Chan recommended that resources be allocated to increase access to mental health care and that physicians conduct more comprehensive screenings for mental health issues for patients who are prescribed opioids.

How can we aid the recovery from an opioid overdose?

The University at Buffalo has been collaborating with 17 emergency rooms throughout western New York to test out a new way of treating opioid overdose patients who come to the hospital. Instead of just stabilizing  patients and releasing them, the emergency room providers have been placing patients on a short course of buprenorphine, a medication used to treat opioid addiction, and then offering guaranteed appointments within two days at a drug treatment clinic. Since implementation of the program, deaths due to opioid overdose in Erie County have gone down by 37% in the past three years. Having found great success, the University at Buffalo has now partnered with the state Department of Health to launch the Buffalo Medication Assisted Treatment and Emergency Referrals, or Buffalo MATTERs.

What are we doing to prevent opioid addiction?

SUNY Upstate Medical University was awarded a $3.7 million grant  from the National Institutes of Health in January to work on an experimental heroin vaccine. In previous trials, the vaccine produced the necessary antibodies to prohibit heroin from entering the brains of mice and rats for an extended period of time. If approved by the FDA, SUNY Upstate researchers will be able to test the vaccine on humans.

At Empire State College, students have an opportunity to enroll in a new, first-of-its-kind Bachelor’s Degree program in Addiction Studies that will allow them to study online, face-to-face, or a combination of both. The Addiction Studies program was developed with a goal to help address the public health emergency created by the opioid crisis as well as alcohol, and other substance use disorders.

A number of SUNY schools receive funds from the $2.5 million NYS OASAS College Environmental Prevention Grant program administered by the New York State Office of Alcoholism and Substance Abuse Services (OASAS) for alcohol and drug use prevention. This funding goes to support the development of campus community coalitions and foster community partnerships that can help strengthen local prevention efforts. Statewide partnerships like these can go a long way to preventing substance misuse among people communities of all kinds.

Researchers at the Rockefeller Institute of Government, led by Director of Research and University at Albany Professor Dr. Patricia Strach, spent the last two years conducting hundreds of interviews, meetings and calls with community members in Sullivan County to discuss the opioid epidemic. Recently, they released a 126-page report detailing their findings, and presenting a roadmap to solving the crisis. Stories from Sullivan: How a Rural Community Responds to the Opioid Epidemic is free to read online. This report plays a key role in educating both policymakers and the general public on how to effectively address the opioid crisis.

Continuing to lead the charge of education and prevention, SUNY and the NYS Writers Institute is hosting Beth Macy, author of the New York Times bestseller Dopesick: Dealers, Doctors, and the Drug Company that Addicted America, for an author discussion at  SUNY Global Center in New York City on September 17. Dopesick is the first book to chronicle the widespread impact of the opioid crisis over the course of 20 years. Attendees will watch an  interview with Ms. Macy and have an opportunity to ask questions. The first 100 attendees will also receive a free copy of the book. The event will also feature a reception and book signing.

SUNY is working hard to address the opioid epidemic, and this event is only the latest to shine a light on the issue. If you are interested in attending, register for the event and be part of the conversation.