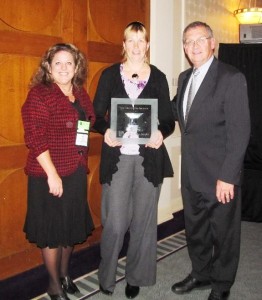 JoAnne Cloughly, associate professor of culinary arts at SUNY Cobleskill, has been named Educator of the Year by Women Chefs & Restaurateurs (WCR). The award recognizes excellence in culinary education and honors women whose dedication to teaching is making a difference in the culinary community.

Cloughly was recognized along with six other honorees during WCR’s 12th Annual Women Who Inspire gala dinner held in conjunction with the organization’s national conference on November 6 in Cambridge, Mass. The WCR Women Who Inspire Awards recognize professionals who have demonstrated excellence in the kitchen, dining room, beverage profession, baking and pastry arts, community affairs, farming and food production, and for a lifetime of culinary excellence.

A member of the SUNY Cobleskill community since 1998, Cloughly has developed and taught courses in Commercial Baking and Vegetarian Cooking, as well as an Honors Colloquia in Food History and Farm-to-Table. She has worked to get SUNY Cobleskill students involved in such events as the Santé Wines Conference working with Food Network star Gale Gand, and the New York State Farm Bureau’s Legislative Days (Harvest Fest) with Chopped star Ric Orlando.