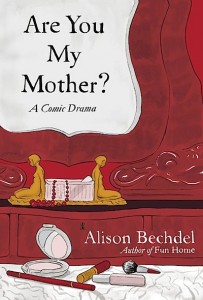 Critics are giving author and graphic novelist Alison Bechdel rave reviews for her latest graphic memoir, Are You My Mother? A Comic Drama, just released. Hailed as “magnificent,” “inventive,” and “satisfying,” her follow-up to the 2006 Fun Home—which dealt with the death of her father—traces her troubled relationship with her still-living mother.

“I haven’t encountered a book about being an artist, or about the punishing entanglements of mothers and daughters, as engaging, profound or original as this one in a long time. In fact the book made such a deep impression on me that after reading it, I walked around for days seeing little bits and snatches of my life as Alison Bechdel drawings,” reports Katie Roiphe in the New York Times.

“The Durst Lectures are an exciting extension of the wide range of offerings at Purchase College that involve writers and writing,” said Louise Yelin, chair of the School of Humanities and a literature professor here. “They complement our extensive curriculum in creative writing, dramatic writing, and journalism. Over the years, they have brought us such distinguished writers as Art Spiegelman, Tony Kushner, and Sharon Olds.”