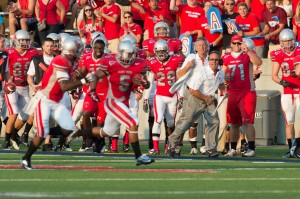 Whether we earned the right to be in the playoffs or not, the 2012 Stony Brook football season was very satisfying on many ends. If you look at our schedule, essentially we played 15 straight weeks of football – 4 weeks of preseason followed by 11 weeks of regular-season games. This team was consistent, worked hard, and was grateful for the opportunity to be a Stony Brook football player. Secondly, we had the opportunity to play two tough Football Bowl Subdivision schools, Syracuse and Army.

Playing in an environment like the Carrier Dome, I thought our players responded very well. I guess you can say you’re never sure how your players will react to playing in front of 50,000 people, but the effort was there; we just came up a bit short. The adversity we faced playing a school like Army was just so different than other road games. The cadets appreciate the opportunity Saturdays afford them. We played our most complete game against Army – Offense, Defense and Special Teams. We were efficient in the pass game, ran the ball effectively and controlled time of possession. Defensively, we forced four fumbles and held their rushing offense, which led the country in rushing at the time, to their average.  Previously, Army had run for more than 400 yards against Northern Illinois and Wake Forest.  We held them to 273 yards.  We kicked three field goals and were very sound on our coverages.

We finished our conference season with a 5-1 record. We lost to a tough Liberty team in the season finale, but as I told the team, one loss does not define who you are. Due to a tiebreaker, Coastal Carolina earned the Big South automatic bid. When we gathered as a team to watch the playoff announcement, I wanted the team to understand that not making the playoffs was not the end of the world. Having dealt with Hurricane Sandy and its aftermath, a lot of people have suffered. We were able to get through it ok, and I wanted the team to have perspective. That being said, I thought our body of work was good enough to get in. We beat two other playoff teams (Colgate and Coastal Carolina), had an FBS win, and nine wins against a very competitive schedule. When we saw we were in the tournament, I felt our team understood what was at stake; the opportunity to continue our season. I think our team’s mindset is in the right place. We’re very excited to be at home against a very tough and talented Villanova team. We’re excited our 22 seniors have one more chance to compete.

Stony Brook defeated Villanova 20-10 in the first round of the Football Championship Subdivision playoffs at Kenneth P. LaValle Stadium. They now move on to the second round and will play at Montana State on December 1.