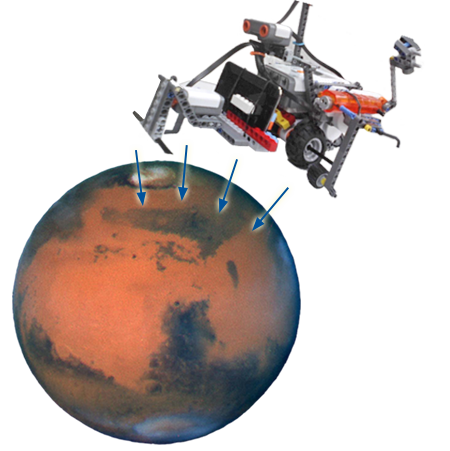 At Pine Grove Middle School in East Syracuse, NY eighth-grade students are preparing to land ROVER robots on the planet of Mars. Their Mars might be simulated, and their ROVER robot might be made out of LEGOs, but this three month-long project requires students to work collaboratively and learn skills in design, building, and programming to successfully pull off their Mars landing.

The students are led by two of their S.T.E.A.M. (Science, Technology, Engineering, English Language Arts and Mathematics) team teachers, Jason Fahy and Tim Patterson. The Pine Grove Middle School is an innovation platform school within the Empire State STEM Learning Network (stewarded by the SUNY Office of the Education Pipeline) and a founding member of the Central New York Regional Hub of Empire STEM, which also includes SUNY College of Environmental Science & Forestry and Onondaga Community College.

Mr. Fahy and Mr. Patterson were inspired by their visit to NASA’s Jet Propulsion Laboratory in Pasadena, California in August 2012, where they spent two days touring the facility and learning all about the upcoming Mars landing of the NASA Curiosity ROVER. The trip culminated with the space enthusiasts watching the landing with NASA engineers at one of the official viewing sites. Inspired by the experience and wanting to share their enthusiasm with their middle school students, Mr. Fahy and Mr. Patterson jumped into recreating the ROVER project in their classrooms. 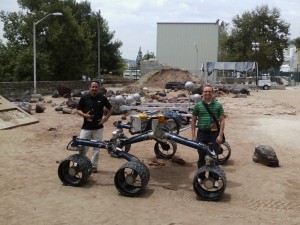 The Pine Grove ROVER drop project started in November 2012, with students designing and building robots that will be able to land safely, navigate rough terrain, collect data (temperature and pH) from a body of liquid, and operate a drill and a ChemCam (LASER) to analyze what they find on the surface of their simulated Mars environment.

Throughout the project the students benefited from their exciting partnership with NASA. The students were able to video-conference with the very NASA JPL engineers that are working on the real Curiosity ROVER to ask questions, hear progress reports on the Curiosity ROVER, and have face-to-face conversations with STEM professionals.

The students have been working hard and are now entering their third and final phase of the project. During Phase 1, groups of four students followed blueprints to build LEGO Mindstorms robots of increasing complexity.  The robots are controlled using ROBOLAB software, which allows students to create programs to perform simple tasks.  During Phase 2, the students increased their skill sets while learning how to solve difficult problems and work around design issues.

Now in Phase 3, groups of students in each of the teachers’ classes are working with their classmates to design, build and program one ROVER to be deployed on the Martian terrain. Video communications, Magnetic Field Orientation, and Entry Descent and Land are all systems that the students are working on to make sure that the ROVERs will be fully functional for their missions. On drop day, scheduled for 1:30PM EST February 1, 2013, each class of 24 students will run Mission Control for their robot, commanding its behavior remotely by running and sending computer programs to Lego NXT processors affixed to each rover.

This is another great example of what is going on across New York thanks to SUNY and the Empire State STEM Learning Network. The Empire State STEM Learning Network is a statewide, community led collaborative advancing STEM (Science, Technology, Engineering, and Mathematics) education to prepare all students across New York State for success in school, work and life.  Empire STEM is transforming education through regionally-based STEM communities that can create and implement the most innovative approaches in classrooms, schools and programs. A connected set of regional hubs and partners are beginning to work together more efficiently to identify, test, validate, share and advance promising and innovative STEM teaching and learning programs, practices, policies, platforms and partnerships.