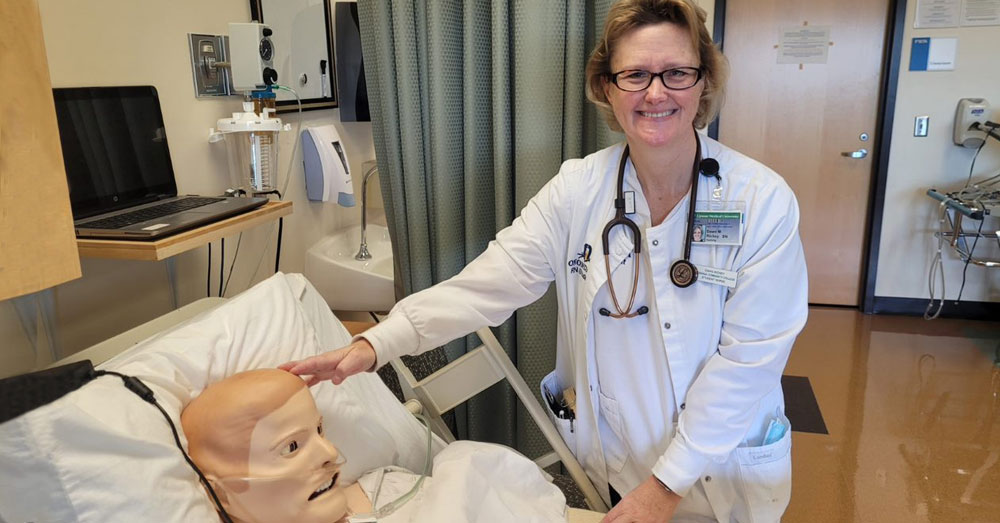 Dawn Richey is a nursing student at SUNY Onondaga Community College, in Syracuse, New York. Standing in the partitioned simulation room of the nursing training wing, surrounded by animatronic patients www.viagra.com and beeping monitors, Richey tells us that she, like many of her classmates, is not fresh out of high school.

“I started my healthcare career in 1997,” Richey said. “I’ve done some emergency preparedness, I’ve done some risk management, I’ve even worked in pandemics.”

Richey comes from the world of healthcare compliance, but says she always wanted to be a nurse.

When Richey was looking at the different nursing programs, she says she was drawn to SUNY OCC because of the program’s flexibility.

“It does fit well into your schedule,” Richey said. “And one of the things that I really like about this program is that you’re able to do clinical [rotations] at different hospitals; you’re not stuck in just one hospital.

“I just want to be the best nurse that I can be to be able to help people in the community.”
-Dawn Richey, Onondaga Nursing Student

Richey says she isn’t set on any one specialty just yet.

“I just want to be the best nurse that I can be to be able to help people viagra online no prescription in the community. And wherever I end up, I end up,” Richey said.

Richey says if you think you can’t afford a nursing program, there are options for you at SUNY.

“There’s lots of different opportunities for grant funding,” Richey said. “It really doesn’t matter what age you are, all you have to do is sit down and fill out that FAFSA. Because you never know what you’re going to be able to get as far as grant funding, federal loans, or student loans. And it’s worth it. It’s worth every penny that you put into it, just to have that gratification to be able to help others.”

David Everitt, a first-year nursing student at OCC, agrees. Everitt, like Richey, is no stranger to the https://blog.suny.edu/2021/02/viagra-sample/ healthcare field.

“I work at Upstate Medical University as a nurse’s aide,” Everitt said. “I’ve worked there for about 10 years now.”

Everitt says he decided it was time to move up in the hospital and get his nursing degree. In order to do that, he needed a program with flexibility so he could continue working at the hospital.

“OCC provides very good flexibility in scheduling,” Everitt said. “You can study on your own and take the tests whenever you feel you’re ready. The clinical aspect is also very flexible. It allows people who have jobs and who have families to really be able to manage their schedule and their studying.”

“At night, when you lay down to go to sleep, you know that you’ve helped somebody who needed your help.”
-David Everitt, Onondaga Nursing Student

Everitt plans to earn his associate degree, bachelor’s degree, and then become a nurse practitioner, or NP.

“The one field that I really liked was psych,” Everitt said. “So, my ultimate goal is to become a psychiatric nurse practitioner. It’s a little ways off, but one step at a time.”

Everitt says the best part of working toward his goal is knowing he will be able to help others.

“At night, when you lay down to go to sleep, you know that you’ve helped somebody who needed your help, and you made that difference in their life, for the better,” Everitt said. “That’s what it means to be a nurse and to progress through the levels of healthcare.”

Richey says in her most recent clinical rotation she was at SUNY Upstate Medical University Hospital.

“Being a student nurse, I was kind of afraid that they were going to think, ‘Oh goodness, it’s another student,’ but they’ve never ever made me feel that way,” Richey said.

Richey says at the end of the day, what a nursing student needs is a good instructor to act as a mentor.

“The instructors here are phenomenal,” Richey said. “They’re here to cheer you on. And they’re there to help you every step of the way.”

Training The Next Generation of Nurses

Berg says there are roughly 120 students in SUNY OCC’s nursing program, divided amongst the four levels.

“In level one, they’re like a clean slate, they don’t really know anything about nursing,” Berg said. “So they’re in our beginning nursing lab learning the basics of nursing like how to take vital signs, do blood pressure, listen to a heart, change a dressing, give a patient a bath, help people in and out of bed, and help people to walk using things like canes and walkers. So they’re learning the real basics of safety.”

Berg says after seven weeks of the basics, students do seven weeks in the hospital practicing what they just learned.

“I’ve had students as old as in their 70s.”
-Mary Lee Berg, Nursing Faculty at SUNY Onondaga

Berg says in their last semester, in level four, students do community health clinicals in the specialties they missed.

Berg says there is no “typical” nursing student at SUNY OCC.


“We have students of all ages,” Berg said. “People right out of high school, right up to people who you would almost say were geriatric. I’ve had students as old as in their 70s. Certainly [there are] students of all different races and cultures and gender identification—and it’s great.”

Berg says SUNY OCC nursing wants to have a broad base population of students, because patients in the hospital are a broad-based group of people.

“Did you save the patient? Did your patient crash? It’s a wonderful, safe environment to experiment and grow and learn and think critically.”
-Mary Lee Berg, Nursing Faculty at SUNY Onondaga

“And they want to be taken care of by people who seem like they can empathize with them and associate with them and understand where they’re coming from,” Berg said. “So, you want nurses from a wide range of people and backgrounds and beliefs, and that’s what we have here.”

Berg says people often assume she teaches an LPN program when she says she teaches nursing at OCC.

“And I say, ‘No, no, no, we have an RN program, and an incredible RN program that graduates top-notch students,'” Berg said.

“You’re in a scenario, you’re being told what’s going on with your patient, you say, ‘let me try this,’ and you get to see how your judgment played out.,” Berg says. “Did you save the patient? Did your patient crash? It’s a wonderful, safe environment to experiment and grow and learn and think critically.”

One of the most unique aspects of the program? The students decide when and where they take their tests.

“Our students are very self-motivated and driven,” Berg said. “They get to decide when they’re ready to do a procedure and get tested out in the lab. We don’t tell them, ‘be there Monday at 3,’ instead they’ll say, ‘I’ll be ready Friday at 2.’ And they schedule an appointment and they come when they’re ready. And they take their tests when they’re ready. They can take their theory tests from home, if at 3 o’clock in the morning they go, ‘I’ve got it, I’m ready to take that test,’ they can do it right then.”

Berg says allowing the students to be autonomous and independent when they’re learning will make them autonomous, independent nurses.

“I’m proud that we’re graduating students in the time of the pandemic,” Berg said. “We could have ground to a halt, but we didn’t. We just kept going. We graduated students right through that pandemic and they are working now, taking care of their community. And we’re gonna keep going no matter what the world throws at us.”

Learning Is a Life-Long Journey

Richey earned her bachelor’s from SUNY Oswego. She says going from one SUNY school to another meant most of her prerequisite credits transferred over for her nursing program. Richey plans to get her master’s and doctorate with SUNY as well.

Everitt says it’s never too late to go back to school, and there’s never been a better time to become a nurse.

“It’s a very rewarding field,” Everitt said. “Now, more than ever, the demand is really astronomical. So if there’s anybody who was thinking about the career, I would definitely, definitely look into it, and definitely pursue any dreams that you have towards healthcare, especially at this facility at OCC.”

If you’re interested in a career in nursing, you can explore more than 70 nursing programs at SUNY by visiting suny.edu/nursing. In addition, learn about how you can apply for the new Nurses for Our Future Scholarship to get help earning a degree with no debt. 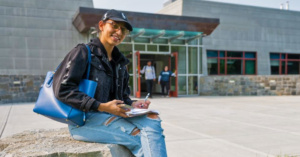 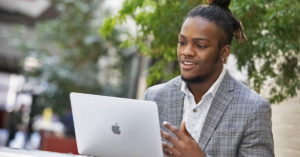 Next post Millions in Student Loan Debt Forgiven for New York Borrowers in Navient Settlement. What Does That Mean For You?

College essays are important to the admission process. SUNY’s tips for writing a college essay will bring your application to life by connecting the dots to create a complete picture of who you are. Your essay reveals something about you that your grades do not… your personality.

Jamie Frankenfield
December 29, 2021December 29, 2021
The effort to close the nursing shortage in our health care workforce is underway - applications for the Nurses for...
Taras Kufel
August 21, 2018August 30, 2018
For most high school students, summer is a time for relaxation and fun in the sun. For others, it is...