Paul Riker is a musician, technologist, and father. Riker is currently living in Saudi Arabia with his family where he is employed as the Audio Systems Developer for the Visualization Laboratory at King Abdullah University of Science and Technology.  He develops audio software solutions for immersive virtual reality systems with as many as 64 channels of surround sound. Riker also works with scientists from fields including Genetics and Fluid Dynamics to use sound as a means to reveal important properties of their data.

Riker attended Schenectady County Community College to focus on music before completing his Bachelor’s degree in Music at SUNY Potsdam in 2002. He continued his education thereafter at Queens College (CUNY) in 2005, where he earned his Masters degree in composition. He served on the faculty of Nassau Community College and Queens College‘s music department from graduation until 2009 and is currently working on his PhD dissertation at the CUNY Graduate Center.

1.   What sparked your interest in music?

My parents are both music lovers and played lots of music in our home when I was growing up. For as long as I can remember, I had an interest in working out how music was put together. I would punch out melodies on my battery-powered Casio keyboard. This continued through elementary school, through to high school where I was able to perform and learn more about musicianship. I had some great teachers in the AuSable Valley school district, including Richard Molholsky, Steve Collier, and Carl Boisey, to name a few. 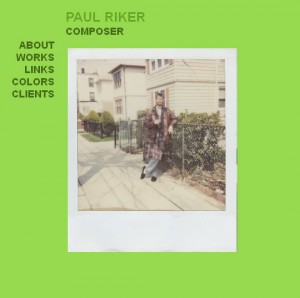 2.   You now develop audio software, but studied music composition.  What is the cross-over between the two?

At some point, I began to favor the creation of music from the ground up, building entire software instruments or creating musical sounds using a computer. At first, I was using programs like CSound to build computer instruments and scores. I also used DAWs (Digital Audio Workstations) like Pro Tools to sculpt new sounds from existing sounds. This was a fulfilling process, but I was missing the human element, the potential for random divergence from the fixed ‘score’.

I began writing bits of software to allow for musicians to interact with the computer in real-time. This is nothing new, by the way; it was just new to me at the time. These experiments initially involved things like having the computer “listen” to certain notes for certain (or random) amounts of time and using those recorded notes as a basis for building new sounds to play back over the speakers alongside the performer. More recently, I’ve been working on the use of a brain-to-computer interface for the performance of this type of music. The musician’s brainwaves control the parameters of the software, so that the shape of the piece is determined largely by conscious thought. I performed my first attempt at this method at SUNY Potsdam in March of 2012.

So my interest in software development comes completely out of my musical pursuits. The skills I acquired as a composer of computer music just happened to translate into the field of sonification and auditory display, which is what I do here at King Abdullah University of Science and Technology.

3.   You are currently spending time in Saudi Arabia working with the King Abdullah University of Science and Technology in the Visualization Laboratory.  Why did you choose to go overseas, and what are the differences between universities in Saudi Arabia compared to the United States?

The choice to come to Saudi Arabia had a lot to do with family. Of course, the work is highly engaging and unique; there are no facilities like these anywhere else in the world, actually.  But, a major factor was family life. In the New York City area, where we were before this, my wife and I were both working. She was a music teacher in a Nassau County school district. I was working as an adjunct professor of music at Queens College and Nassau Community College and as an instructional Technology Fellow at City College in Harlem. We both loved our jobs, but moving overseas presented an opportunity to pursue challenging work while having much more time for family. Add the exceptional experience of living in such a multicultural community and the idea became very attractive.

Of course, there are some well-known conservative social policies here in Saudi Arabia.  In most of the country, men and women do not share a classroom, for example. But at KAUST, most of those policies are not in effect. Although campus life is on the conservative side, students, faculty, and staff enjoy a variety of recreational and social activities that hep to create a good community. In general, university life is very positive. The students and faculty bring a spirit of research and enterprise that energize the campus, much like in the US.

4.   Where did you see your career going before attending Schenectady County Community College?  Where do you see it now?

Before attending S.C.C.C., I really didn’t know where I wanted to go with my career. I knew that I was serious about music, but that was all. When I began the curriculum at S.C.C.C., things really started coming together. With the guidance of the faculty of the music department, I made great strides in my musical competency, especially in the areas of classical music theory literature. I also grew tremendously as a performer due to the many performance opportunities both within the music department and in the capital region of New York. When I left Schenectady to complete a Bachelors degree at SUNY Potsdam, I had a completely different perspective on my potential career paths.

Now, I see myself as a composer and educator. Here at KAUST, I am pursuing a research path that applies directly to my PhD dissertation, which I hope to complete in 2013.

[iframe style=”padding-left:10px” width=”392″ height=”221″ align=”right” padding=”50″ src=”http://www.youtube.com/embed/GOxjseRHKfU” frameborder=”0″ allowfullscreen] 5.   Overall, how did your college education help prepare you for life and your career?

My experiences as a student have been crucial. My undergraduate work at SCCC and SUNY Potsdam (Crane School of Music) introduced me to new ways of thinking about music and gave me the knowledge and confidence to pursue graduate work. My graduate work at Queens College, CUNY and the CUNY Graduate Center helped me to refine my skills as a composer and educator, while pursuing focused research more independently.  I would say that SUNY and CUNY excel at instilling self-sufficiency in their students, and that may be the most important preparation for life and career. S.C.C.C. was particularly good at encouraging this kind of personal responsibility. At age 17, it was a vital experience.

Take full advantage of your resources. Your professors, your facilities, your extracurricular activities, and your fellow students are all essential parts of your education. Your professors at SUNY are amongst the best in their fields. Work hard for them, and they will do the same for you. Take the time to fully utilize your facilities, whether they are computer music studios, scientific laboratories, computer graphics labs, etc. These are the places where you can safely learn through practice and make great strides toward proficiency in your chosen field.

Pursue extracurricular or off-campus activities related to your field or an area of interest.  Self-initiated experiences while in college are of great personal benefit and look good on your resume. Engage with your fellow students inside and outside of the classroom.  Your peers can act as surrogate professors when you are trying to acquire a new skill, digest a new topic, or cram for an exam. Your fellow students also motivate you. Surrounding yourself with positive, motivated peers is important. Have fun and make the most of your time!