On February 11, dozens of SUNY campuses convened at the Legislative Office Building in Albany’s Empire State Plaza to showcase their individual contributions to their communities as well as SUNY’s collective contributions. SUNY Day is an event where the public, senators, and assemblymen are all welcome to see the latest of what each SUNY campus has to offer. This year’s theme was experiential education.

Generation SUNY is helping bring you a few of those stories in our SUNY DAY 2013 series. 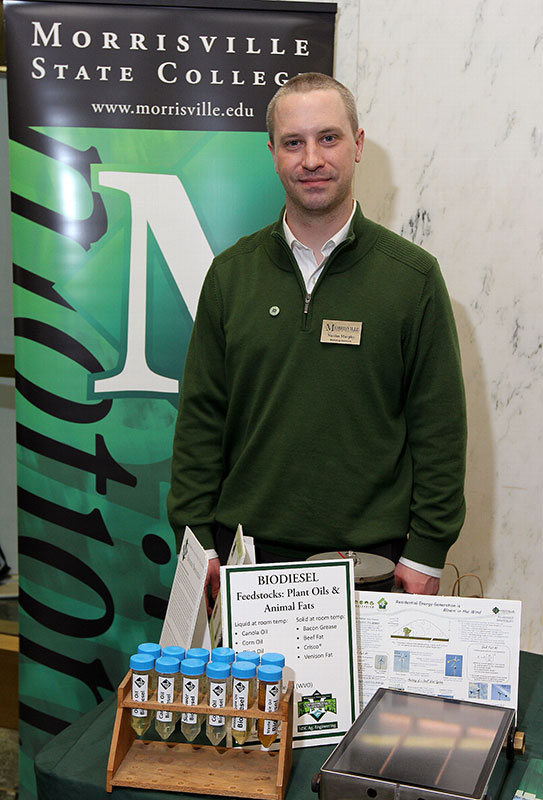 At Morrisville State College (SUNY), they believe in experiential learning or what they call “the living classroom”. This means that when a student is asked to apply what they have learned, they simply do it. In an environment that stresses “learning by doing”, Morrisville State has hands-on curricula that prepare students for their futures. “We know that when our students graduate, their future employers are more likely to be interested in what they can do, rather than what they have read.”

Being known for experiential education, the college has on campus facilities for students to utilize for their chosen field of study. The 25,000 square foot Sheila Johnson Design center incorporates the look of the college’s original dairy farm but is a new, modernized addition to the campus. The dramatic building includes multiple studios, a wood shop and a digital production and photo area.

Morrisville State is home to one of the very few publicly accessible equine rehabilitation facilities in the Northeast. The Morrisville State College Equine Rehabilitation Center (MSCERC) is run by skilled, trained professionals whose lives are dedicated to taking care of horses. In September 2011, the center welcomed its first set of horses to be cared for. Students receiving a bachelor degree in equine science will be trained through innovative and entrepreneurial education preparing them for careers in the equine industry.

We had the opportunity to speak to Nicholas Murphy from the Public Relations office at Morrisville College at our annual SUNY Day event. To explain what the college has to offer, the display consisted of natural resources, renewable energy equipment, cheese made by students using milk produced on campus, and a display built by architectural students. “Just trying to show our focus on experiential learning and learning by doing,” says Murphy. “It’s what we call Morrisville in motion.”