Binghamton Students Build a House for Themselves 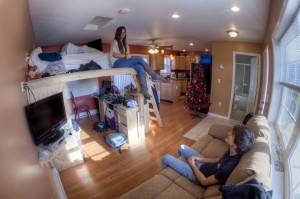 Michael Zella and Ashley Haugstatter of Binghamton University in the house they built for themselves.

Michael Zella and Ashley Haugstatter, who attended high school together in Long Island, were inspired by the small house movement to build their own home 15 minutes from campus. The movement encourages downsizing to save money and have a smaller environmental footprint.

“I like the fact that you can own something free and clear with no mortgage and still have a high quality of living, just on a smaller scale,” Zella said. “Last winter we were sitting around talking about it, and we decided we were going to buy land and build a house.”

Zella said his parents were skeptical at first.

The $35,000 project was financed by Zella’s parents, who occasionally came to Binghamton to help build. His father and stepfather own construction companies and his mother helped with fixtures and paint. Still, the students did the majority of construction, completing the project in August 2012.

The students cut down about 20 trees, excavated and cleared the land, removed 80 yards of dirt, built forms for the concrete-slab foundation, framed and sheathed the house, shingled the roof, put up sheet rock, placed tile, did electrical work and plumbing, and more.

Zella and Haugstatter also rented and learned how to use equipment such as a skid steer and excavator.

“Michael told me what to do and I just followed,” Haugstatter said. “He’s really smart and a Google enthusiast, so anything he didn’t know he looked up.”

“A lot of it was just intuition,” Zella said.

There are more benefits to living small than a low carbon footprint. “Our total expenses every month are $1,000, including gas and food,” Zella said. “We could live in this house with a minimum wage job, plus we get to go home every day and take pride in what we have done.”

“It’s also nice to have your own space and not have to deal with a landlord,” Haugstatter added.

Because the students own the house, they also have the option to make a profit by selling or renting it in the future. Zella and Haugstatter said they hope to be able to keep the house for fun in the long run.

But all fun aside, Zella and Haugstatter’s tiny house just may be the start of a new business venture.

When Zella, a junior, began building the house, he was studying business in the School of Management. The project encouraged him to change his major to mechanical engineering, and now he is thinking of starting his own construction company.

“I would be delighted to build more houses here,” Zella said. “Small homes are great for the elderly because there are no stairs, and they probably could live on their social security. We would love to start a tiny-house village.”

Haugstatter agreed. “There are so many people out there who couldn’t afford to pay a mortgage every month, but if we built them one of these smaller houses they could afford it,” she said.

Still, Haugstatter, a sophomore majoring in psychology, has no plans to continue in construction.

“I hope to be a nurse practitioner or go into counseling psychology,” she said. “This was just a fascinating experience for me. I’m well rounded now.”