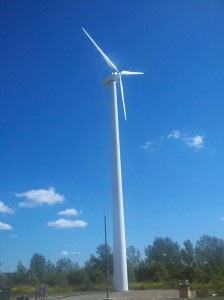 The newest member of Alfred State’s growing renewable energy family is currently catching the breeze above campus — a 100 kilowatt grid-tied wind turbine that will offset some of the college’s electricity usage. The turbine came online just a few weeks ago and is already producing clean, green energy.

“This community wind project is another example of sustainability at the college and highlights the progress of our Center for Renewable Energy,” says Craig Clark, interim vice president for academic affairs at Alfred State.

The wind project has been 14 months in the making — an initiative made possible through grants from both the Appalachian Regional Commission and the New York State Energy Research and Development Authority (NYSERDA), which together provided more than 50 percent of the funding.

“The project will not only produce energy for the campus but also expose students to another wind turbine on campus,” Clark says. In fact, one of the project’s main goals is to establish a small wind laboratory for students within already existing programs, offering them even more hands-on experience with green technologies. “This knowledge will increase industry demand for these graduates,” he says.

Alfred State already has several other smaller wind turbines on the Wellsville campus, as well as a zero energy demonstration home, active and passive solar technology, geothermal, and a host of other green technologies already in place in facilities like the new $33 million Student Leadership Center. And a second zero energy demonstration home — dubbed Pioneer Landing — is also in the works, with students getting involved in the design and building of the project.

In a world with rising energy costs, climate change, and dwindling resources, Alfred State is taking a proactive approach to the future of energy. “This wind turbine is an important step towards achieving Alfred State’s emissions reduction goals,” says Julian Dautremont-Smith, chief sustainability officer at Alfred State. The project will complement the college’s growing emphasis on sustainability and strengthen the region’s access to training and employment in green industries.

“Alfred State has been a leader in educating technical students since at least the 1940s and students in trades for more than 45 years. It’s what we’re known for,” Clark says. “There is a real lack of this type of skilled workforce in the region, and a lack of models to sell community wind. This project will allow Alfred State to continue training the highly skilled workers the industry requires and help meet national, state, and regional needs.”