10 Musicians That Made It Big After SUNY

If you follow along, we recently explored SUNY Alumni In Television and Movies This Semester to great acclaim! So, naturally, it is time to highlight talented SUNY alumni in music. This fits perfectly with the start of Round I of Music Madness, which pits 13 of some of the top musical artists in the SUNY system against each other to discover who is the voters’ favorite SUNY star.

Of those who have attended a SUNY school before this year’s Music Madness contestants, many have been awarded impressive recognition around the world. From single-man/woman bands to complete rock groups, the lineup of 10 Musicians That Made It Big After SUNY may surprise, intrigue, or confirm your beliefs about them!

1. Regina Spektor is a singer-songwriter and pianist. Spektor graduated from SUNY Purchase College with honors in 2001 after completing the four-year studio composition program in three years! She is best known for anti-folk music featured in movies and television shows like Girls and Grey’s Anatomy. She sang the theme song for the Netflix series Orange is the New Black.

2. Moby is an American singer-songwriter, musician, DJ and photographer. He is well-known for his electronic music and helped bring electronic music to a mainstream audience in both the UK and the United States in the 90’s. Moby attended SUNY Purchase College and has since sold over 20 million albums worldwide and has been blanketed by awards and nominations, including the Billboard Artist of the Year and Album of the Year Awards in 2002.

3. Kiss Kiss is a rock band that was first formed at SUNY Purchase by members Joshua Benash and Jared Kams. The band, well-known for its unique sounds in part achieved by utilizing an electronic violin, took inspiration from all angles; their name is from a series of short stories by Roald Dahl and they have a myriad of musical influences.

4. Monte and Avery Lipman are major power-players in the music industry. After graduating the University at Albany in 1986 and 1988 respectively, they founded Republic Records where they signed artists like Colbie Calliat, Florence + The Machine, and Enrique Iglesias. They have multiple partnerships with television shows and movies like The Voice and The Hunger Games.

5. Natalie Merchant was the lead singer of the rock band 10,000 Maniacs before venturing off to a solo music career. As a Jamestown Community College student she gravitated to music by participating in the local campus radio station. Her debut solo album, Tigerlily, was a critical and commercial success in 1995, relaunching her career. (BONUS: Merchant was granted an Honorary Doctorate from SUNY New Paltz in 2009) 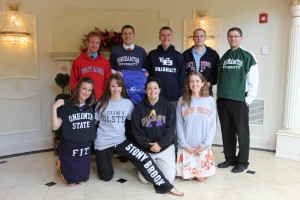 “SUNY Family” Earns 16 Degrees, Attends 11 SUNY Campuses
This photo was tweeted and gained a lot of attention. We reached out to the family to learn more…

6. Christine Goerke is a Grammy Award-winning dramatic soprano. Goerke attended SUNY Fredonia in the fall of 1986, where she became more interested in vocal music and decided to pursue a degree in vocal performance. In 1994, Goerke graduated from Stony Brook University with a degree in voice and went on to become a member of the Metropolitan Opera’s Young Artist Program from 1994–1997.

7. B. Martin is a hip-hop artist who graduated from the University at Albany with a degree in business. He has worked with and performed alongside hip-hop heavyweights like Mac Miller, Lupe Fiasco, Big Sean, Young Jeezy, and Snoop Dogg. Most importantly, Martin released “SUNY Anthem” this spring, which chronicles the story of his college experience.

8. Blue Öyster Cult is a heavy metal rock band that grew up together in Long Island and, subsequently, attended Stony Brook University. They are best known for songs such as (Don’t Fear) The Reaper, Burnin’ for You, and Godzilla. Since the band’s first album release in 1971, BÖC has sold 24 million worldwide–17 million of those outside of the United States.

9. Ingrid Michaelson is a singer/songwriter who is an alumna of Binghamton University.  Her music can be heard throughout modern culture–from a Tropicana commercial to an Old Navy commercial to the backtrack of several popular television shows, like Grey’s Anatomy, Scrubs, and One Tree Hill. (BONUS: Michaelson’s time at BU is referenced in her song, The Hat)

10. Ben Mauro is a guitarist and background vocalist who has worked with artists like Lionel Richie, Kelly Clarkson, Britney Spears, and Nelly Furtado. He attended Onondaga Community College and now has his own band, 13Curves, which was formed in 2007.