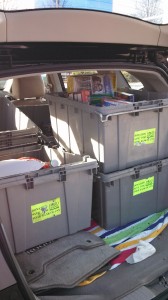 SUNY Empire State College in collaboration with the SUNY Center for Professional Development, and SUNY Upstate Medical OASIS/Healthlink, all located at 6333 State Route 298, East Syracuse collected more than 350 lbs of food which was delivered to the Food Bank of Central New York.

“The Food Bank of Central New York provides a great service to those among us with the least and I am happy that we were able to help them this holiday season” said Nikki Shrimpton, dean of the college’s Central New York Center. “We plan to continue holding food drives throughout the year as we know that families are in need year round” she continued.