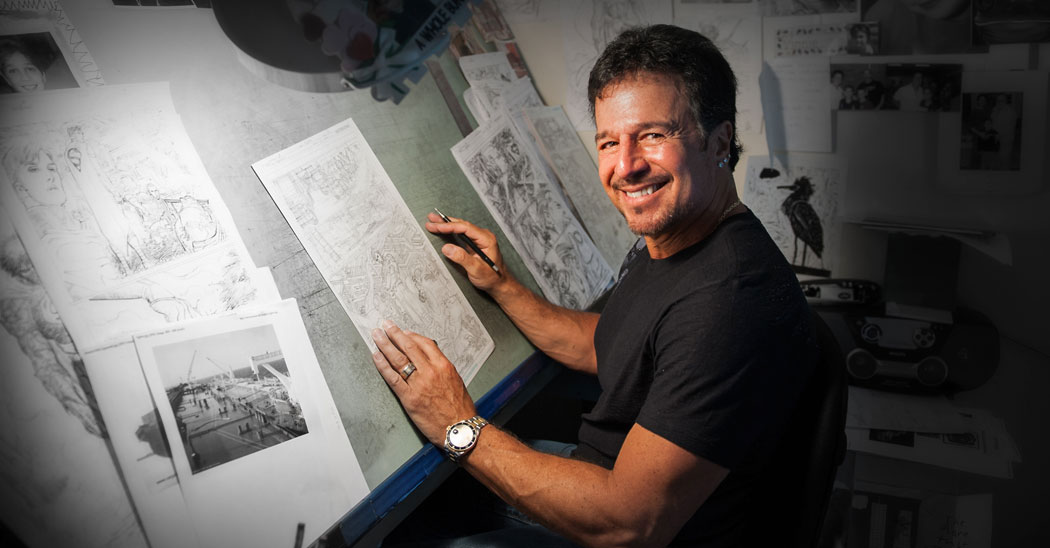 The New York Times likened it to Derek Jeter leaving the New York Yankees to play for the New York Mets. But top-tier comic book artist John Romita, Jr. – who recently made national news by jumping from Marvel Comics to draw Superman at arch-rival DC – isn’t buying the hype.

“I can’t hit a curveball!” Romita says with a hearty laugh. “I’m not a hall of famer! I appreciated the analogy. But I did cringe at the exaggeration.”

The thing is, not every fan and industry insider would agree with Romita – known in the business as JRJR – that the Times exaggerated.

Romita – a 1976 graduate of Farmingdale State College – had been drawing for Marvel since 1977, debuting with a short feature in a Spider-Man annual. By the early ‘80s he was Spidey’s regular artist, and his career was on its way. Romita never could have imagined it this way, because his father, John Romita, Sr., had been Spider-Man’s primary artist on and off during the ‘60s and ‘70s, when the character soared across the Manhattan skyline and into the hearts of comics fans everywhere.

“That was the most fun because of the history with my family,” Romita says, but with a big “but”: “It was intimidating because my father is such a brilliant artist, and I can only compare myself to him.”

Romita, Jr.’s father was, as you can imagine, a big influence on his career. JRJR’s passion for drawing budded at a young age, as he observed his father’s early work for Marvel.

“When I was very young I watched my father go from a romance artist to a superhero illustrator. When I saw him do that I was locked in. I do remember in my mid-teens saying I want to do this more than anything, and as I was approaching high school graduation I was sure I wanted to be an illustrator or a cartoonist.”

His father encouraged his right-brain direction, but not necessarily in the direction his son wanted to go.

“He said, ‘Be an artist, just don’t push yourself to be a cartoonist, because it’s not a very lucrative business.’ And at the time he was right. But it was right in front of me, I saw what I could take from it watching him, and I was learning as I was watching him. So I wasn’t paying much attention to his advice, and I was doing more what my heart said.”

Still, JRJR was uncertain about his future. He enrolled at Farmingdale in 1974 to study advertising art and design, thinking that if he couldn’t make a go at cartooning he would go into advertising or teaching.

“People were always telling me I would never make a living as a cartoonist,” Romita says. “When I went to school for advertising art and design that sounded more prestigious than cartooning.

“I was pretty much flying by the seat of my pants. I was messing around up at Marvel doing some work for them between semesters and during vacation time. Honestly I didn’t have a real plan. I hoped that something would stick out and tell me what to do.”

After Romita enrolled at Farmingdale he soon had the inkling that his advertising and design studies could actually be a conduit to a cartooning career.

“It was a great curriculum and it played to what I liked,” Romita recalls. “It was more than I could have imagined. There was a commonality between the design I had been directed toward at school and the overall panel designs in illustration. There was a common ground that opened my eyes. I said ‘I get this. I get it.’

“So I was very happy to know that design, what I was instructed in at school, melded with the design sense that was instilled in me by artists, including my father.”

Now Romita could see the possibilities. Illustrating comics might actually be something he could succeed at. But at home his father was still urging caution.

“He said, ‘Not unless you finish those two years can you discuss with us what you have in mind, because I’m not going to take you up to Marvel and give you any help at all, because it doesn’t happen that way. You’ve got to do it all on your own.’ So I walked around with a portfolio.”

And the portfolio got him work at Marvel. Over 37 years there he drew everyone from Spider-Man to Daredevil to Iron Man to the X-Men to Thor. Artistically, Daredevil was his favorite, though it was a Spider-Man issue – with a “9-11” theme – that had its greatest impact on him. It still reverberates deep in his soul.

“I can’t ever feel like I can brag about that artistically because I don’t remember doing it, it was such a sick time, very emotional. I don’t really consider it work that I will show people. I can’t open the book. I can’t look at the original artwork.” Transitioning to a new beginning

Romita said he never pictured himself being a superstar artist drawing superheroes. But superstar he is, and thus the industry frenzy and media attention when he quit Marvel. He saw the split coming though when he began to publish comics that he had created himself, such as Kick-Ass, a series about a high-school kid who decides to go into superheroing – only to have his butt kicked issue after issue.

“Marvel was not happy with me wanting to do more of that, “Romita says. “I really desired to do something new and different and they were not thrilled with it, so we couldn’t come to a meeting of the minds, and they pretty much let me go freelance. DC caught up on that,” and the courtship was on.

“DC was so pleasant about it so I thought I would try it.” DC was also happy to give JRJR the freedom to develop his own work. “That’s ultimately what I want to do, going to work for myself.”

So for at least the next dozen or so issues, it’s “Look, up in the sky! It’s a bird! It’s a plane! It’s Superman!!!” Romita’s first issue – which was written by DC creative honcho Geoff Johns – was published in late June, and Romita says the reaction so far has been solid.

“Everybody’s happy. And if the guy that signs my check is happy, it makes me happy. The sales have been good and that’s all that matters to me.

“Now comes the tough part, which is maintaining it for 12 to 18 issues. I’m thinking less about the sales and more about what I can do better on the subsequent issues.”

“What I can do better” is a mantra with Romita, a very unassuming guy. Ask him what he brings to the table that no other Superman artist has before him and he demurs.

“Honestly, just the style. I can’t get too crazy with the comparisons because there have been so many brilliant artists before me.”

Romita will, however, admit to one strength that sets him apart from his contemporaries.

“The one thing I am exceptional at, in my own mind, is telling a story. That actually makes my artwork look better. So maybe the thing that I do is a different kind of storytelling. I have good storytelling chops.”

The Washington Post, in its story about Romita’s “defection,” called him “one of the most popular and polarizing artists in comics.” JRJR thinks he knows what the reporter meant – and he doesn’t take it as an insult.

“The joke is, stick around and eventually you’ll find somebody who loves my work. The other joke is, stick around long enough and you’ll find somebody that hates my guts. It’s part of the business. I struggled early on to get a thick skin, and I have a very thick skin now. There’s a large amount of both, so you can say there’s a lot of people that love me.

“Ultimately it comes down to finding the majority and making them happy.” 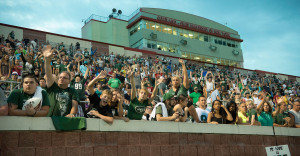 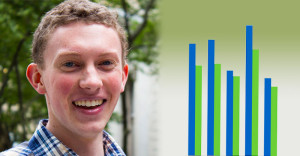 Next post Study: Do Public Colleges Get Less Attention?