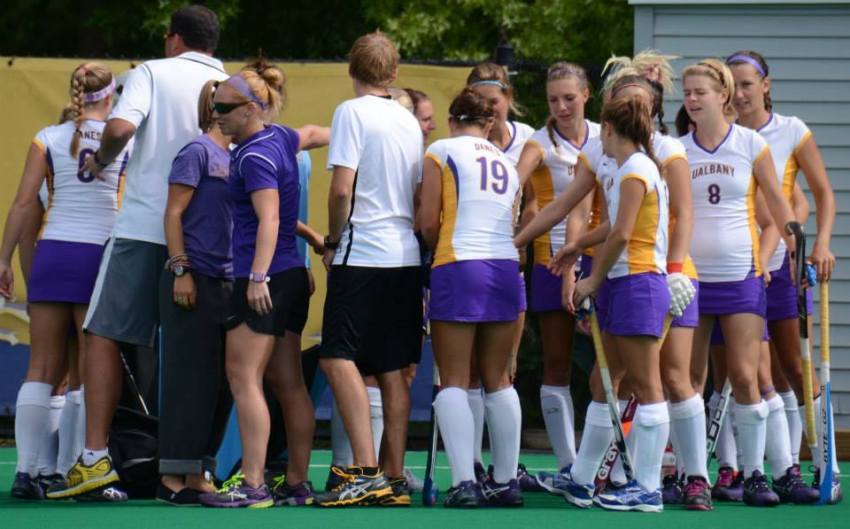 The UAlbany field hockey team defeated No. 2 Maryland, advancing to an NCAA Tournament Final Four for the first time in school history.

SUNY can now add advancing to a Division I Final Four to its growing list of athletic accomplishments. The University at Albany Field Hockey team rewrote the history books last Sunday, defeating No. 2 Maryland to advance to the NCAA Championship Semifinals. The victory clinched the first trip to a DI Final Four for a SUNY team.

The No. 12 ranked Great Danes face No. 3 UConn in College Park, Maryland on Friday, Nov. 21 at 4:45 p.m. The other semifinal game features No. 1 North Carolina and No. 4 Syracuse. Semifinal winners play for a National Championship at College Park on Nov. 23 at 1:00 p.m.

Meet @ualbanyfh in this video as we wish them good luck in the NCAA Final Four! http://t.co/Itg4pOGjEY

This season has put UAlbany on the national field hockey radar. The team’s win over Maryland marked the highest-ranked opponent a Great Danes’ squad has ever defeated. The team earned its first program NCAA Tournament victory last Saturday, a 2-1 win over No. 5 Wake Forest in the first round. Maryland and Wake Forest combine for 11 national field hockey championships together.

UAlbany will be riding a 14-game winning streak into the Final Four. Its 20-win season marks an all-time program high. Individually, sophomore midfielder Paula Heuser led the nation in points per game (3.40) and goals per game (1.45) heading into tournament play. Sophomore goalkeeper Maxi Primus has 10 shutouts this season, including two over nationally-ranked opponents (Stanford and Maine).

You can support the Great Danes’ by watching the team’s semifinal match-up live on NCAA.com. Check out this interactive bracket to view the entire tournament.

Learn more about the Great Danes’ successful season via ESPN