Dedicating a Life to Helping Others 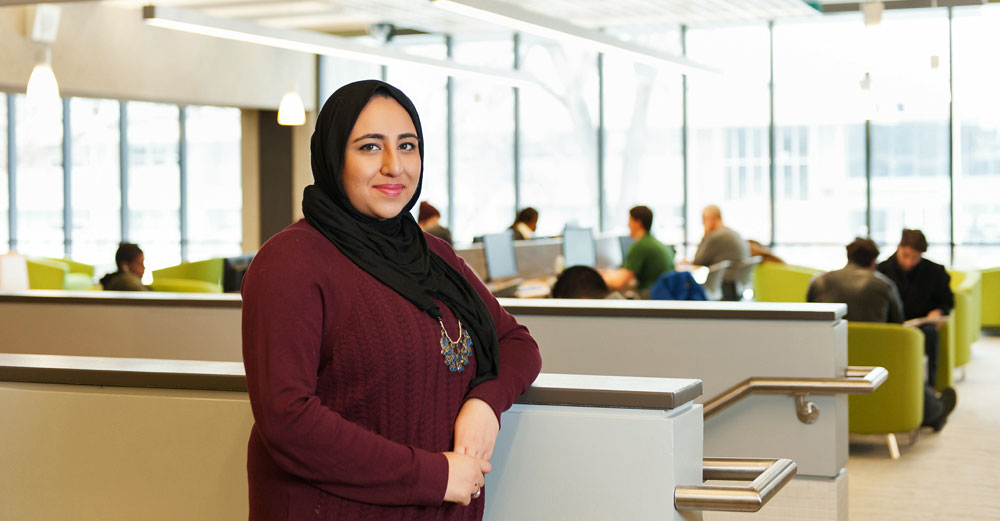 Hajera Siddiq, a winter ’14 graduate of Farmingdale State College, has set the bar high for herself for the rest of her life. Extremely high.

“I am capable of becoming part of the change the world needs to make it a better place,” she says with great passion.

You have to be passionate to really believe you can be a difference-maker. Hajera was first stung by injustice through her parents’ experiences. They are Afghan war refugees, and growing up her family culture emphasized volunteerism and giving back to community. They stressed the importance of education, and how that could be a catalyst for Hajera to help change the status quo.

At first she was just feeling her way through school; she did not identify a major during her first two years at Farmingdale. She almost transferred to another school, but thought better of it. She wound up in the Science, Technology and Society bachelor’s program, with a focus on history and the arts. She minored in Middle Eastern and Islamic studies. 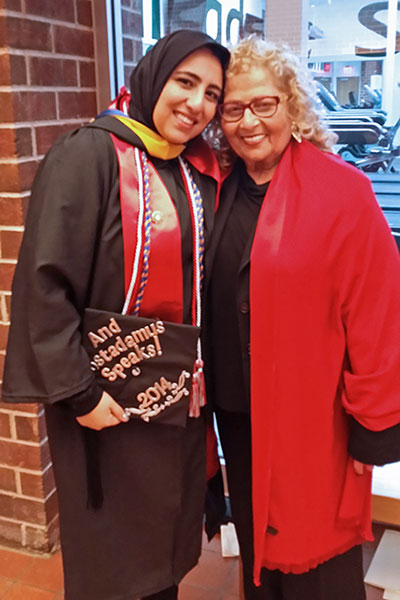 Hajera says it was the influence of Dr. Miriam Deitsch, Distinguished Professor in the sociology and anthropology department, and director of the Social Science Research Institute, which convinced her to stay at Farmingdale.

“Dr. Deitsch has inspired me in so many ways,” Hajera says. “She taught me how to not only take action to bring change, but how to inspire others to join the crusade to bring positive change to the world.”

Even Hajera’s parents are enamored with Dr. Deitsch. Her dad told his daughter that her mentor was “a gift” to her.

“Students like Hajera bring joy to our profession,” says Dr. Deitsch. “As an educator, I have enjoyed the privilege of working with many gifted potential leaders – students who care about the human condition and seek to make a difference in the world.”

Hajera also gives kudos to Dr. Anjana Mebane-Cruz, former chair of the Undeclared Major department. Says Hajera, “She helped me evolve from a high school student to the college graduate I am today. I really appreciated the way – much like Dr. Deitsch – she has respect and high expectations for the students she taught.”

It was Dr. Deitsch who recommended that Hajera apply for a fellowship from the Horace and Amy Hagedorn Fund at the New York Community Trust, a grant awarded to the Social Science Research Institute for its social justice work. Hajera was awarded the fellowship and began a research project at Sustainable Long Island, a not-for-profit organization whose mission is to advance economic development, environmental health, and social equity for all Long Islanders. She is presently studying disaster preparedness on Long Island with an emphasis on identifying the services each town offers its residents when disaster strikes.

Another major advance for Hajera was her acceptance to SUNY New Paltz’s Global Engagement Program (GEP) last spring. Held at the SUNY Global Center in New York City, GEP is designed to prepare students for global citizenship, training them for challenges such as peace and security, human rights, climate change, and sustainable economic development. It was a major moment in not only Hajera’s educational career, but in the course of her life.

“It was truly one of the most memorable semesters of my undergraduate years,” she says. “I had the opportunity to befriend peers who will end up changing the world.

“Not only was the environment one that I had not experienced before, but the curriculum was structured so that the students were teaching one another through class discussions.”

The real payoff for Hajera was the GEP internship program, which required students to work at a Manhattan non-profit organization, doing research on what the organization does and its effectiveness. She was placed with The Clinton Foundation, where she worked in office operations, the finance department, and the internship program. Then to her surprise and delight, at the end of the semester she was offered more than one job at the Foundation. She took the position of office operations coordinator.

Now that Hajera has cleared one of life’s hurdles, she has two goals: to get a master’s in museum studies and become the agent of change she has dreamed about.

“I don’t know what the future holds for me, but I do know two things: I will be continuing my education and striving to help bring change, to help others for the greater good.”