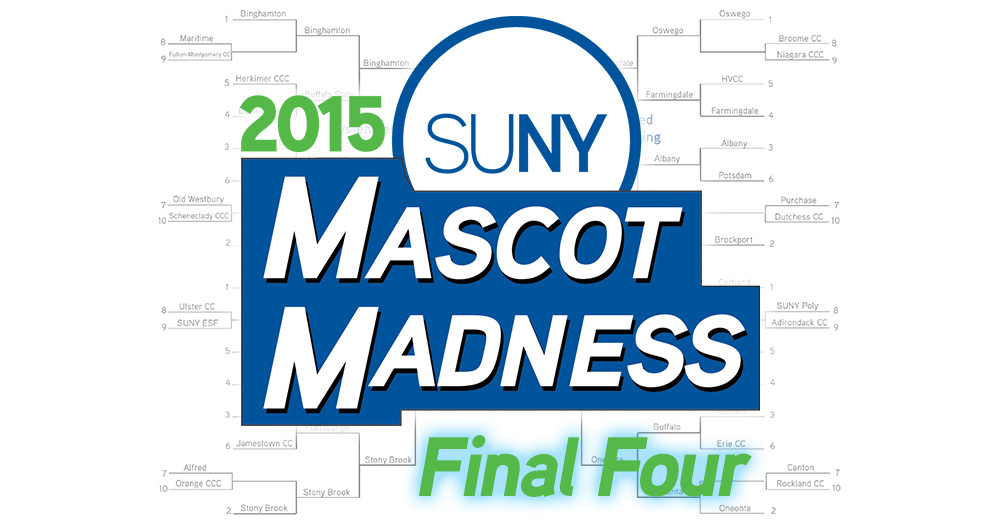 Welcome to the 3rd Annual Mascot Madness competition, the chance for YOU, the students, alumni, and fans to decide who SUNY’s favorite campus mascot is! We started with a total of 40 mascots from across New York State in the running to win the coveted title. They were each randomly placed into 4 SUNY regions and ranked by the number of athletic teams each mascot represents, which determined which mascots competed against each other in each round.

We are down to the Final Four, which begins at 12:00 on Monday, March 30, and ends at 4:00 on Wednesday, April 1. The contests in round three were extremely close, some separated by a two percent margin of victory. After all votes were reviewed and verified, we find that we are left with Baxter Bearcat of Binghamton University, Hugo the Hawk of SUNY New Paltz, Ram-bo of Farmingdale State College, and Red the Dragon of SUNY Oneonta. There’s still some serious competition here, with the last 2 champions competing against each other for a trip to the finals. Who will see their way into the finals this year? Will a new mascot claim the championship trophy? Only you can decide. Vote below!

Voting is now closed. The results will undergo verification and repeat votes will be removed from tallies before two finalists are announced. Stay tuned.