Can We Improve Cancer Treatment With the Tiniest of Nanoparticles? 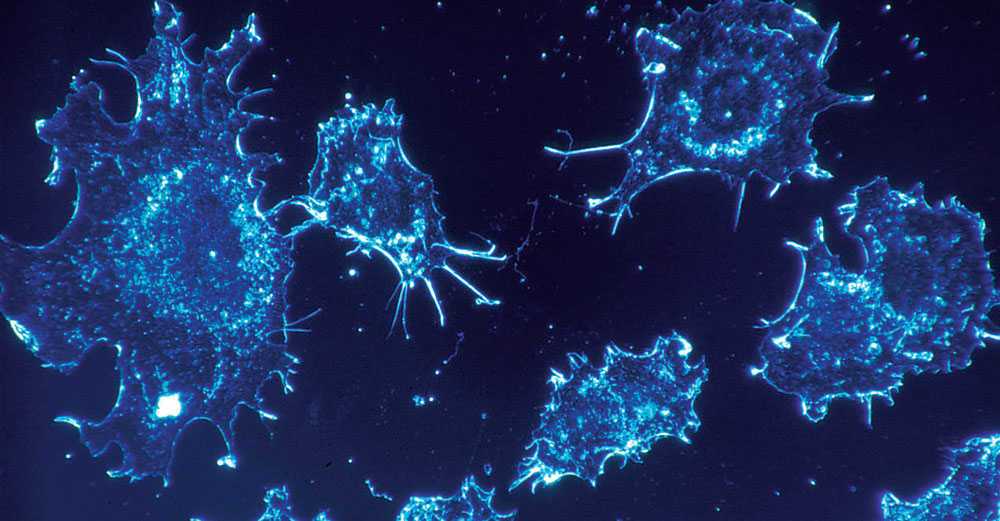 Nausea. Hair loss. Exhaustion. Memory Problems. Treating cancer with chemotherapy drugs takes a major toll on the body because the medications kill everything in their paths—cancer cells and healthy cells alike. And after all this damage, the drugs still can miss their targets, especially when the cancer is metastatic, or able to spread to other parts of the body. Similarly, imaging agents—such as dyes that stain cancerous tissue and can be visualized with different imaging techniques like MRI—also can miss their mark.

Ivan Gitsov and colleagues may have found a way around these issues. The multidisciplinary team—which received funding from the Biomaterials subgroup of the Materials and Advanced Manufacturing Network of Excellence—has developed a kind of tiny container that holds both an imaging agent and a cocktail of drugs, and delivers them directly to diseased tissue.

“This dual-purpose nanoparticle enables us to deliver drugs, track the rate of delivery [how fast the drug is accumulated in the target’s tissue], and track the fate of the tissue [how fast it dies or whether or not it dies at all],” said Gitsov, associate professor of polymer chemistry, director of the Michael M. Szwarc Polymer Research Institute, and chair of the Department of Chemistry at SUNY College of Environmental Science and Forestry. “In addition, if the cells are already spreading throughout the body, we can monitor their spread and treat them because our nanoparticle will follow them. For metastatic cells this is of paramount importance.”

According to Gitsov, the team is focusing its studies, at least initially, on cancer and atherosclerosis (the hardening of arteries) . “These diseases are among the leading causes of death in the United States,” he said. “They require different treatment protocols, but their drug delivery strategies will be very similar.”

To target these diseases, the researchers needed to develop something that could enter diseased cells. Their result is a nanoparticle that is so tiny it would take a thousand of them lined up side by side to match the width of a human hair. How did the researchers go about constructing something so small?

According to Gitsov, they provided the right ingredients (polymers made of both synthetic and natural components), put them in an aqueous environment, and then left them alone to assemble themselves. “The polymers spontaneously self-assemble because the hydrophobic (water-hating) parts collapse in water as they try to hide from the water, and the hydrophilic (water-loving) parts envelope the hydrophobic cores.” Gitsov added that this technique works well to deliver cancer drugs because several of the most popular drugs are hydrophobic and become encapsulated within the nanoparticles.

How do the nanoparticles know where to go once they are injected into the body? “The nanoparticles are treated with specific antibodies or ‘homing devices’ that target specific organs or tissues, such as tumors in the lungs or breast tumors,” said Gitsov, adding that size also is a factor. “They can’t be too big because then they can’t enter the cancer cells, but they also can’t be too small because then they will be excreted too fast and will not fulfill their purpose. The ideal size is between 50 nanometers and 200 nanometers in diameter.” According to Gitsov, once the nanoparticles reach their destination, they release their contents, killing the diseased cells and providing a marker for visualization.

The team currently is conducting tests on normal and cancerous cells in vitro (in a culture dish). “I’m conservative, so I would say the results are rather encouraging instead of extremely encouraging because there are many factors that we will encounter when we go to small animal studies,” said Gitsov. “Right now, what we can say is the nanoparticles themselves are non-toxic and they can specifically enter the cells that we want them to enter, which means that our homing devices are efficient. We also have preliminary results on efficiency of drug delivery, specifically with doxorubicin. And the results are also rather encouraging, which means that the survival rate of the cancer cells is very low.”

Albert Titus, professor and chair of the Department of Biomedical Engineering at the University at Buffalo and team lead of the Biomaterials sub-group within the Materials and Advanced Manufacturing Network, agrees that the multidisciplinary nature of the team is important. “Some of the most interesting problems occur at the intersections of disciplines,” he said. “You can sit back in your comfort zone and do what you’re used to, or you can stretch a little bit because that’s where an interesting problem is. And that’s where you’re likely to intersect with what someone else is working on. By working together you can do things that you can’t do on your own. That’s what the Networks of Excellence are all about.”