Taking Leadership Qualities From the Classroom to the Stadiums 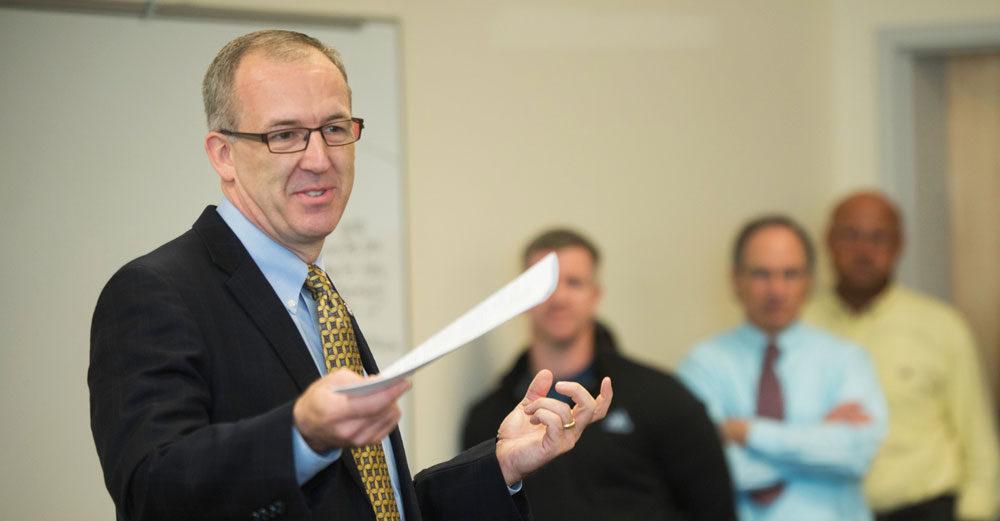 The renaissance man who now leads the most visible conference in college athletics also happens to be a product of the SUNY system.

Before he was named to succeed Mike Slive as the eighth commissioner of the NCAA’s Southeastern Conference (SEC) in March, Greg Sankey earned a bachelor’s degree in physical education from SUNY Cortland. The 1987 graduate and Auburn, N.Y., native is a highly regarded mind in sports circles for his knowledge on compliance issues and his leadership abilities. Just as impressive are his family-man qualities and well-rounded interests outside of his work.

The Birmingham, Ala., resident was described in The Birmingham News this past fall as “a voracious reader, prolific marathon runner and someone who, for his birthday, helped build a clean-water well for impoverished people in India.” In 1996, he was named commissioner of the Division I Southland Conference at just 31 years old.

Sankey, now in his 13th year with the SEC, officially assumed his new seat June 1. He recently chatted about his teaching and coaching aspirations at SUNY Cortland, his life’s influences and his tips for today’s college students.

Thinking back to how you arrived at SUNY Cortland as an undergraduate student, how did it happen?

“I grew up in the Auburn and Skaneateles area, so Cortland was incredibly accessible to me. I also made the decision that while I was going to school I wanted to create a resume, if you will, so I looked for some opportunities to coach at the high school or junior high levels at that time. My junior year at Cortland I ran a recreation program in Cayuga, N.Y. … I’d work on Saturdays and then one or two nights a week I’d drive from Cortland to Cayuga. I’d try to do good things for young people.”

So when you look back to your time at SUNY Cortland, was there an individual experience that helped shape you as a person?

“My junior year, we had to go in to one of the local elementary schools to watch classes and then we had to teach a class. You know, you go into college and you’re going to be a teacher and a coach but when the moment comes that you have to lead a class, you just don’t know what it’s going to be like. It was a Phyllis McGinley-led class, and she encouraged us to involve kids, be creative and use our imaginations. I was supposed to get them to do front rolls and run and move and think.

“So my lesson plan in this gym in Cortland, N.Y., was to take these elementary students on an African safari. We crossed rivers, we climbed Mount Kilimanjaro … I remember being in front of this group and having them crouch down to walk quietly, do front rolls, back rolls, side rolls and the crab walk. That was in the morning, and then later that day I was eating lunch in Park Center on campus. I was having a conversation with a classmate about my lesson that morning. After talking about it, he went in the next day and did the same thing. But he could make an elephant noise, so he trumped me there.

“Imitation being the sincerest form of flattery, it was a moment where I realized I could teach and I could be successful. I had the freedom to think creatively. I really enjoyed working with elementary school aged people. And it was just one of those affirming moments where it was like, ‘Wow, this could really work.’ I could have success teaching and coaching and working with young people.”

You didn’t go on to teach physical education in a formal setting, but would you say your training to be a teacher helped your career?

“Absolutely. I’ve never once been in the teaching setting that I anticipated, but I taught physical education activity classes at Utica College right after I graduated. I enjoyed that greatly. And I’m asked with increasing frequency to speak on university campuses like I did last fall at Cortland. Actually, those are some of the most enjoyable times for me because I get to interact with students.

“One other point about my Cortland experience is having to engage in a discussion about the foundations of an education and then think through how systems develop on a public scale, locally, statewide and nationally … that’s helped me today. I didn’t have a minor in psychology, but … the many psychology courses I completed have all been helpful over time. I also had the opportunity in the physical education area to have a wide range of experiences. It was teaching focused, but you take a field like athletic training — I interact with athletic trainers and sports medicine professionals almost every day now. I also took a few officiating courses. I had electives to build a curriculum that uniquely prepared me for my current opportunity.”

You’re incredibly well read. You’ve run dozens of full marathons. You’re active in crossfit. In such a prominent role, how do you find time to balance everything?

“Some lessons you learn a little bit harder than others. I was 31 years old when I was commissioner of the Southland Conference. And at 32 years old, I spent a night in the hospital. I just worked myself to weariness. Nothing overly problematic, nothing ever happened again … but you learn that you had better take care of yourself. You make time for what’s important. In the aftermath of that experience, I tried to find balance in my life, but there are more than two sides to me. I’m a husband, I’m a father, I’m a son, I’m a brother, I’m a friend, I’m an employee, I’m a leader, I’m a person individually … From that learning experience was the need to engage in better behaviors that took care of me — physically, mentally, spiritually — and my family. From that point on, 1997 and forward, that experience helped inform priorities.

“I also work for a guy (retiring SEC commissioner Mike Slive) who gets up incredibly early, so you have to learn to adjust in life … You had better be able to adapt, especially in the leadership environment today. I’ve had to adapt to live by some principles that inform those priorities and change how I do things — go to bed earlier, wake up earlier, find time to read. For me, the reading part is about learning.

“One of the things that I learned from Phyllis McGinley — I can remember the class — we were talking about teacher burnout and her observation was: ‘When people burn out, that means they have stopped learning.’ And I remember thinking from that point forward that I might get tired, I might be weary of a particular task but I wasn’t going to become burned out. And if I did, I was either going to find something else to do or I was going to do it in a new way.

You’ve touched a lot of lives and obviously a lot of people have touched yours — family members, colleagues, role models. You’re a big John Wooden fan too. Who would you say has taught you the most?

“It’s a group of people. The John Wooden experience happened when I was 11 years old in Auburn, N.Y. I won a book titled They Call Me Coach. It’s actually sitting in my office today. That was an example of a life that I was never going to touch because he was in Los Angeles and I was in Central New York. Syracuse made it to the Final Four (in 1975) and it was John Wooden’s last Final Four, so it was much more real and tangible … this connection between sports and education. His personal example of faith and how he interacted with his wife and his family were incredibly meaningful for me.

“Then the example of my parents. My dad’s a welder and about the hardest working person I know. He can fix anything. My mom has incredible energy and completed her bachelor’s degree when she was in her 40s through the SUNY system as well. One of my uncles was a teacher and coach. He’s a Brockport graduate. We would go see him coach at Phoenix (N.Y.) High School. That’s what really probably planted the seed in junior high and high school that teaching and coaching would be a meaningful way to spend one’s life.

“My first job, my AD at Utica was a guy named Jim Spartano. He asked me my first week: ‘When are you going to start graduate school?’ I said that I was going to wait a year. He said: ‘If you don’t start now, you never will.’ That was some of the best advice I’ve ever gotten. I started in that program and two years later I was done and could go anywhere — to my next opportunity. It’s about being in the right place at the right time. And if I had waited a year, I would’ve taken a different course.”

What’s your common advice for today’s crop of college students?

“People will ask me, ‘Well, how did you get to be where you are?’ And I’ll often joke: ‘If I could answer that in a way that provided real guidance, I would write it in a book and sell it to you for 30 bucks and run seminars.’

“The truth is, when I have taken jobs, it has never been about the money. Money follows. It doesn’t lead. I would look at a job to say, ‘Am I going to learn, be challenged and grow, and work with people who will take the time to help me do those things?’ Typically, when I would look at opportunities, I would put the money in the background, not the forefront.

“I also made a decision not to be limited geographically. I see a lot of people who want to work ‘here’ or ‘there’ … that’s a really unfortunate limitation. You can avoid debt or get out of college with as little debt as possible, it frees up your decision making. I ended up taking $500 a month as a graduate student intern, which again was one of the best decisions I ever could have made. If I would have been encumbered by more debt, then those opportunities might have gone away.”

You’re now in charge of the most successful sports conference in the NCAA. What would you say are the most rewarding and most difficult parts of the job?

“I’ll start with the most rewarding. I think the level of what we do here is both challenging and rewarding at the same time. I mentioned the burnout lesson … with the SEC, for 12 and a half years, I’ve always checked myself to ask: Am I still learning? Am I still growing? Is it still challenging? And it always has been. That’s one of the great rewards. My family will tell you, on a different note, when I’m a part of a game where an SEC team wins a championship our fans commonly and spontaneously start chanting the letters of the conference over and over. That’s actually my favorite time of the year. It happens with great frequency. And that is fun.

“Challenging is just the visibility of the conference and that everyone has an opinion. Sometimes it might not be informed, but it’s great that people have the passion. Looking from the outside in, I didn’t know what to expect when I first joined the SEC office, but I’ve told people one of the great things I have are relationships with these incredible leaders of our universities and athletics programs. I have the good fortune of knowing them personally and knowing them by first name. If you pay attention, you can learn a great deal from them because they’re very good at what they do. Again, that’s an opportunity for learning that isn’t as apparent as sitting in a classroom. It’s an opportunity nonetheless, and something I continue to appreciate.”