Celebrating 100 Years of The Building That SUNY Administration Calls Home 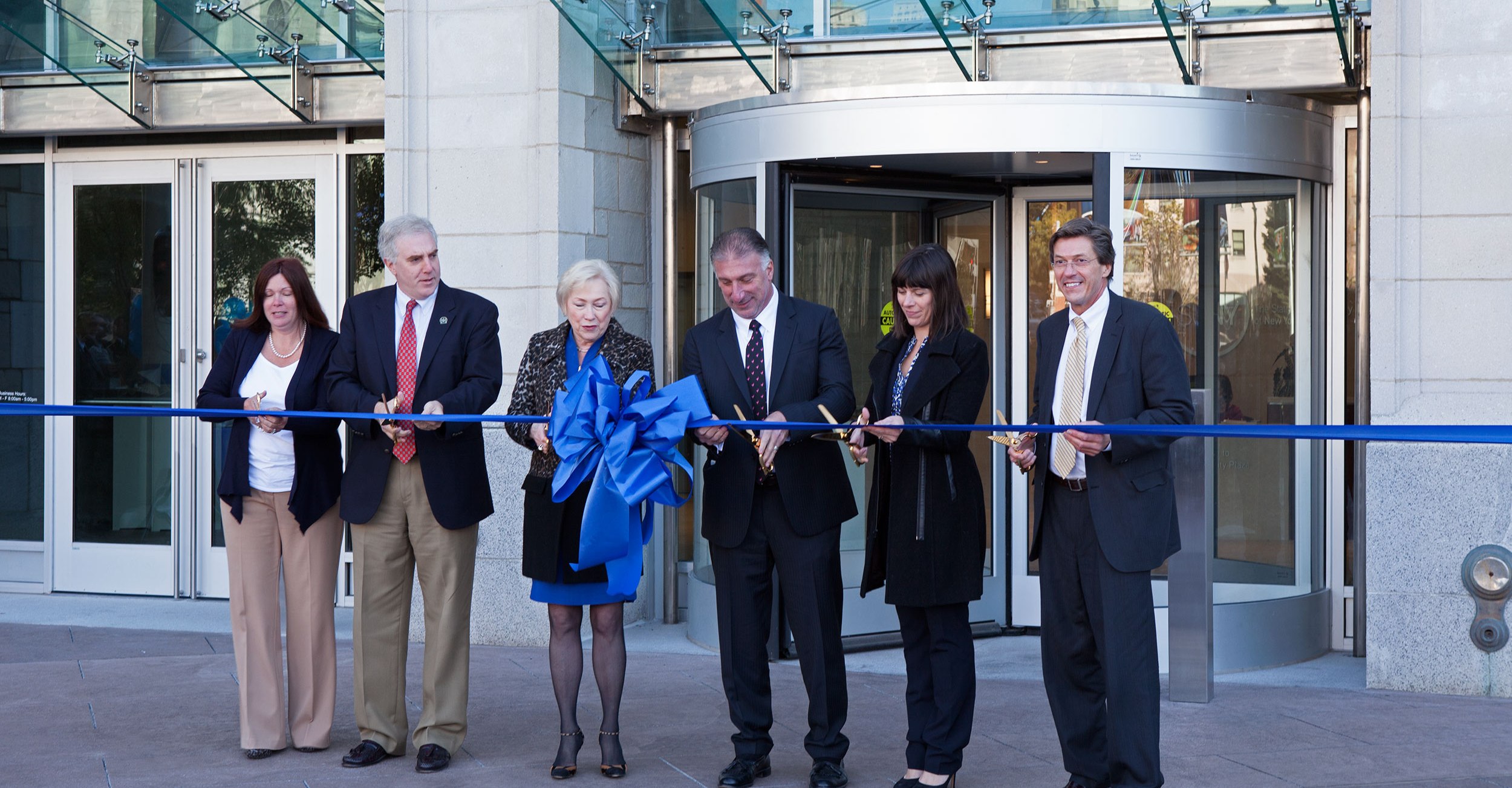 Did you know that this year marks the 100-year anniversary of the SUNY System Administration building? Originally the Delaware & Hudson Railroad Building, the large, castle-like structure was completed between 1915 and 1918, replacing a large railroad yard, trains, and bridge with the more attractive Gothic-style plaza and surrounding buildings that exist today. The State University of New York moved into the main building in 1978 and into what is known as the Federal Building in 1980.

Today, to kick off the year-long celebration of the building’s centennial anniversary, SUNY Chancellor Nancy Zimpher cut the ribbon on SUNY’s Plaza’s newly-renovated front lawn and main entrance alongside Albany business and community leaders. The renovations were done in part to open up the front entrance space in ways the original property design did, as well as provide greater access to the community for public events and gatherings. A widely-recognized cornerstone of the Downtown Albany area, SUNY Plaza represents the talents and diversity of the students and staff of the SUNY system. These improvements reflect the continuous growth and impact of SUNY, helping build an even more vibrant community in the capital of New York State.

In addition to creating a more welcoming landscape and gathering place for the downtown Albany community, the recent renovation of the SUNY Plaza included needed repairs to existing drainage, underground utilities, lighting, and the sprinkler system – most of which had not been updated since the 1970’s. The renovated grounds also include energy-efficient walkway lighting and a more accessible, circular vehicle entrance. 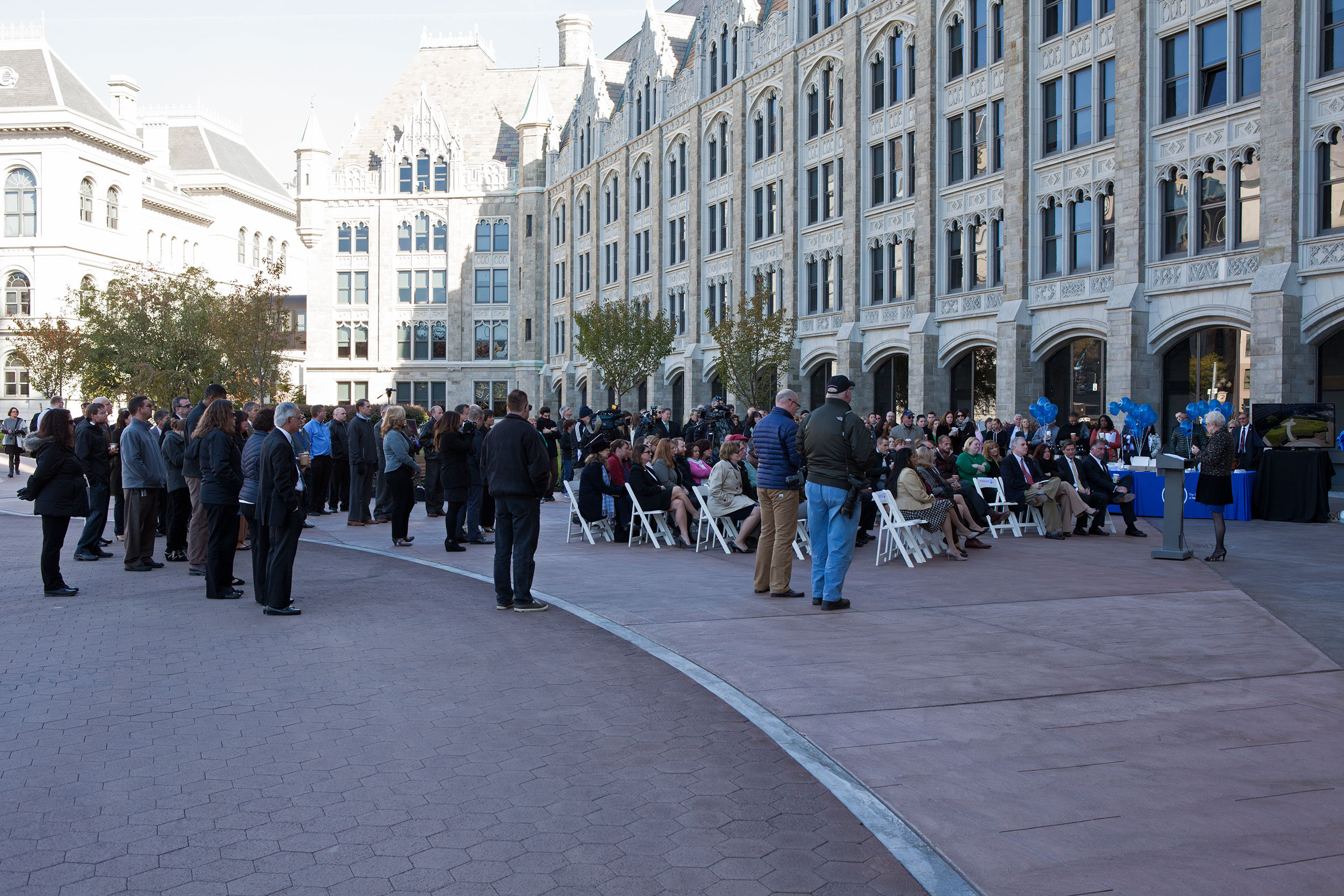 A crowd sits and listens to Chancellor Zimpher speak before the ribbon cutting of the SUNY System Administration Plaza renovations in Albany.

“SUNY is fortunate to have inherited this stunning building and surrounding property more than 35 years ago, and we are proud to be its steward on behalf of the entire university system, downtown Albany community, and the state of New York,” said Chancellor Zimpher. “It is our hope that with this recent renovation, the Albany community will have a safer, more accessible gathering space to enjoy year round, and to join us as we celebrate the 100-year anniversary of this landmark building.”

SUNY System Administration isn’t the only SUNY building which invites its local community to engage with it. On SUNY campuses all across the state, schools and communities are coming together to build up New York. Theater complexes such as UAlbany’s impressive Performing Arts Center and Potsdam’s three concert areas bring in students and community members alike for a shared appreciation of the arts. Additionally, community colleges such as SUNY’s own Broome Community College become hubs of community engagement. And of course, medical centers such as Upstate’s Cancer Center serve the community in the best way they can, through safe, reliable health services.

The System Administration building centennial isn’t SUNY’s only birthday. SUNY’s oldest college, SUNY Potsdam, is celebrating it’s bicentennial through 2016. You can read more about that at the 200 Years of Potsdam Pride website.

At SUNY, we know our institutions are not islands. Whether it is the lawn at System or the doctors at Upstate, SUNY is working to support and engage the state of New York – and that is exactly what this Centennial Celebration is really about. 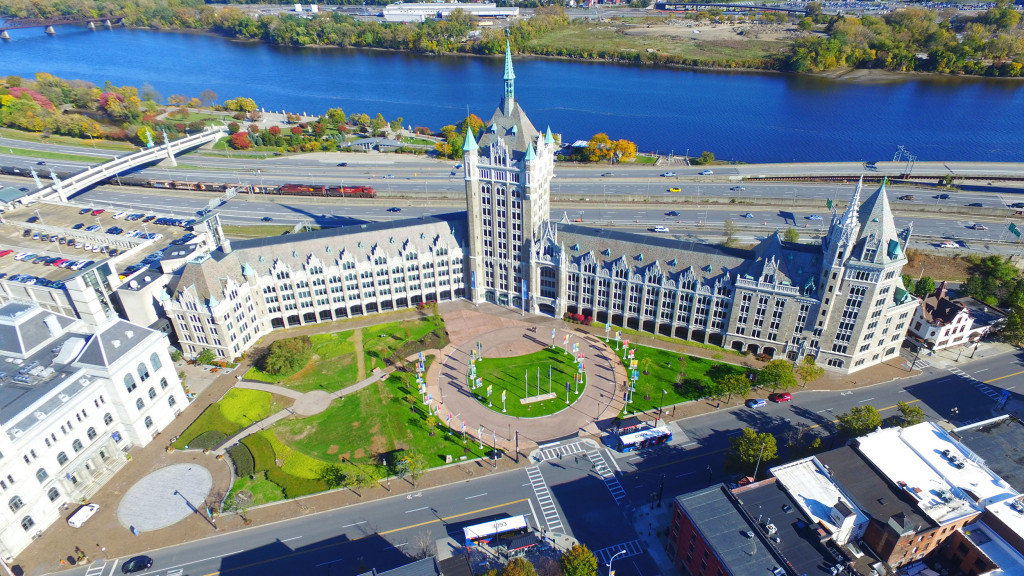