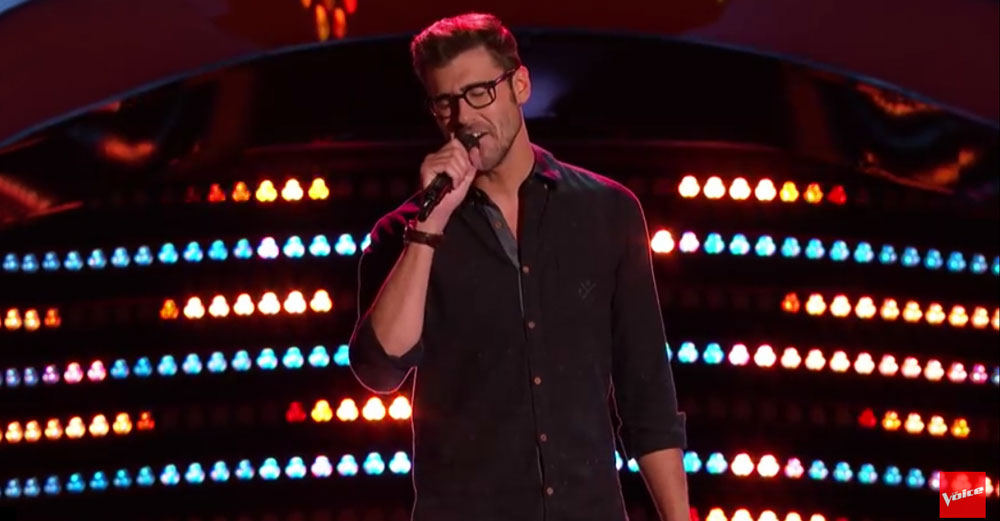 In 2013, Clinton, N.Y. native Ryan Quinn graduated SUNY Oneonta with a degree in Music Industry and Communications studies. Little did he know, three years later he would be among the top contestants on NBC’s hit reality television singing competition, “The Voice.” Stunning the show’s judges, audience, and New York residents alike, Quinn has proven you can achieve anything if you put your voice to it.

“It’s wild. It’s unbelievable,” Quinn said. “But I’m still not fully processing it. It’s going to take me a while to fully understand what’s going on.”

Quinn always had a passion for music, playing drums and piano while growing up. It wasn’t until his time at Oneonta however, that he discovered his talent for singing. It was at college where he would teach himself to play guitar, study voice with Music Department Lecturer Colby Thomas, and sing in three campus ensembles including the Hooked on Tonics a cappella group, the Funk Band and the Mothers of Intention Frank Zappa tribute band.

“I couldn’t have grown the way that I did without any of those three pieces,” Quinn said. “They pushed me in such different ways, whether it was singing bass in the a cappella group and then singing Stevie Wonder in the Funk Band, stretching out my vocal range.”

Quinn’s involvement in his academic studies of music industry and communications, as well as his involvement in campus singing ensembles are part of what brought him to where he is today.

“There were always going to be performances and you always had to be on and take it really seriously and practice,” Quinn said. “It taught me discipline.”

While several SUNY schools have well established theater and music programs, Oneonta is known for its comprehensive Bachelor of Arts degree in music industry. The program is accredited by the National Association of Schools of Music, and prepares students for careers in music management, marketing, promotion, merchandising, publishing, production and performance.

In addition, Quinn was also an RA on campus and was known for organizing open mic nights and jamming out with friends on his floor.

During college, Quinn and a few music industry majors went to New York City to audition for “The Voice” for fun, but never got a call back. Following graduation, he was hired as a teacher’s assistant for music at The House of the Good Shepherd, and continued performing solo or duo gigs in the Utica area. After encouragement from friends and family, Quinn decided to audition for “The Voice” again.

This time he got a call back. From there, the Oneonta alum has become a fan favorite on season 10 of the hit NBC show.

“The Voice” involves the process of finding aspiring singers, who then audition and perform for audiences and four celebrity judges. The judges then select which contestants they want to mentor and coach throughout the show to compete against other judge’s teams. Winners are then selected through the public and television viewers voting. Current celebrity judges include Blake Shelton, Christina Aguilera, Pharrell Williams, and Maroon 5’s Adam Levine.

Quinn stunned audiences on his March 7 audition performing “Can’t Find My Way Home” by Blind Faith. All four judges wanted Quinn on their team, giving him a standing ovation. He eventually decided to be on Team Adam, having Levine as his coach.

Since then Quinn has gained national attention, trending on Twitter, featured on CNN, charting on iTunes, and gaining over 1.8 million views in just one week on his audition YouTube video. The New York Daily News and others have dubbed his rise in popularity, “Quinnsanity.”

Quinn has received support from family, friends, and even his students and faculty from The House of the Good Shepherd.

“He was amazing,” said Quinn’s student Samantha. “He inspired me because I was so shy about singing and watching him and seeing him follow his dream inspired me to open up and know that dreams can really happen.”

Quinn was almost booted off the show last week after being kicked off Team Adam, but was saved last minute by Christina Aguilera to be put on her team. The save secured him on spot on the live playoffs, with Quinn redeeming himself on his April 11 live performance of Sam Smith’s “I’m Not the Only One.” His performance received a standing ovation from all four judges.

“Wherever it takes me,” Quinn said, “whatever this can bring me, I’m going to take it and run with it. Because I just want to play music in any way, shape or form.”

As the competition narrows, Quinn now will rely on public votes to see if he wins the grand prize: $100,000 and a record deal with Universal Music Group.

In 2015, Upstate New Yorker, Sawyer Fredericks of Fultonville, won season 8 of “The Voice.” Soon another New Yorker, and SUNY alum too, may be added to the winners list. Regardless of the outcome, Quinn is grateful for the opportunity his time on the show has awarded him.

“Music is just something that I’ve just always loved to do. It’s my favorite thing in the world, to sing,” Quinn said in an interview with NYS Music. “I’m just happy that I get to do it. And with the circumstances now, it’s just so cool. I couldn’t be any happier about it.”