The concept of hitting a baseball is a rather simple one. Follow the pitched ball with your eyes, swing as it approaches, and hit it. But the higher the level of competition, the more difficult it gets. Not everyone can hit a 98 mph fastball or a 85 mph slider that bends and moves as it approaches home plate. As those pitch speeds increase, the time to see, process, and react decreases, down to a half-second per pitch!

Knowing this, athletes will now incorporate sports vision studies and treatments into their development to become the best they can be. And SUNY’s College of Optometry helps many professional and amateur athletes improve their sports and performance vision.

On July 7, associate professor and director of SUNY Optometry’s Sports and Performance Vision Center, Dr. Daniel Laby, and four third-year Doctor of Optometry students from his summer sports vision elective course, traveled to one of the premiere venues in all of Major League Baseball at Fenway Park, home of the Boston Red Sox, to examine the visual abilities of 40 baseball prospects. 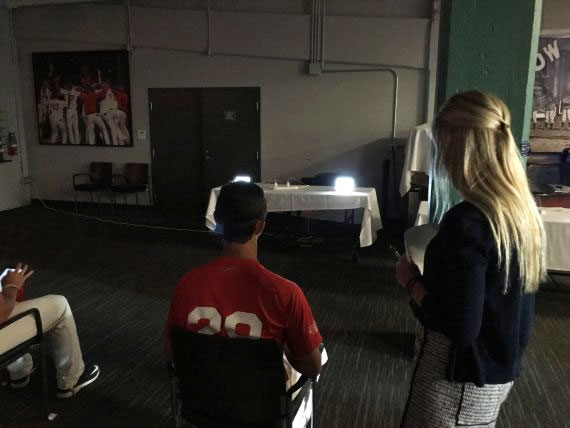 The students, under Dr. Laby’s supervision, tested visual function, including acuity and contrast sensitivity using targets shown for only milliseconds, as well as the hand/eye coordination and reaction times of the players. The abilities shown during these tests can show signs of future potential of these players, all of whom are college prospects playing in the renowned Cape Cod Baseball League this summer in hopes of entering the Major League Baseball draft in 2017.

During their downtime, the group toured Fenway, getting an insider’s view of the park’s famed Green Monster in left field as well as the visitor’s dugout.

Dr. Laby is one of the foremost experts on sports and performance vision, having begun his work in the field nearly 25 years ago with the Los Angeles Dodgers. He has also been responsible for the visual performance of eight other MLB teams as well as for the National Basketball Association’s Boston Celtics and the National Hockey League’s Los Angeles Kings. Dr. Laby also worked with the US Olympic team prior to the Beijing Olympic Games in 2008.

“It was a wonderful experience for the students to put into action on the ‘field,’ what they have been learning in class for the past several years,” Dr. Laby said. “Hopefully several of the players screened today will be selected in the upcoming draft and will start their careers in baseball as our students begin their careers in eye care, having crossed paths in one of the most historic ballparks in America on this warm summer day.”