This Alum is Breaking Through to New Adventures… Let’s Play Ball! 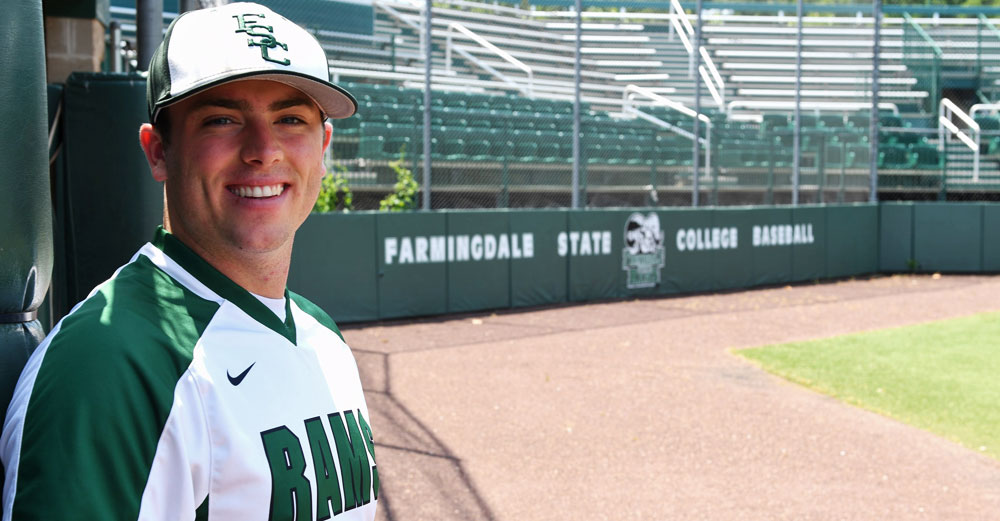 His parents say he was born with a bat and ball in his hands. He remembers playing whiffle ball with his father when he was four years old. At the age of 12 he joined a team that travelled a lot – pretty much putting the kibosh on family vacations. In high school he was All County, and in college he set career and single-season records and won accolades galore. He is Matt Seelinger ‘17, a spring 2017 graduate of Farmingdale State College, and the first ballplayer from the college to be drafted by a Major League Baseball team.

It’s the Pittsburgh Pirates who landed Matt, after watching him pitch for the Rams, and witnessing his five-strikeout performance at a tryout. Matt had an idea he was in the running, from conversations he had had with a Pirates scout, and the hoops he had to jump through leading up to the draft.

“I had an idea, but there was nothing specific,” Matt says. “The Pirates told me to stay by the phone.”

But the buildup to draft day was challenging – both physically and mentally.

“The tryout was unforgettable. Once you check in they measure and weigh you. They measure your arm-span, arm length, wrist, ankles and thighs. You then begin to warm-up and stay loose. They do not tell you in what order you will pitch. There were 12 other pitchers there. I was the sixth to throw.

“It was surreal. I was just so focused and I knew I had this opportunity, I could not let it get by. I spoke with my catcher, we went over the signs. A pitcher and his catcher have to be in sync. We worked well together. Before my first pitch, I heard my father and coach in my head; ‘Get the first pitch strike, work the plate.’ Everything just came together. I was somewhat nervous, but after that first pitch, everything just went my way.”

Soon after, the more tedious part of the process kicked in: paperwork. Pittsburgh wanted SAT scores, and college and high school GPA’s. Then there was a “reasoning” test. Matt explains:

“It was almost like taking the SAT all over again! But as the scout explained, when you are a professional player, you’ve got to think and execute quickly.”

But let’s back up, to the backyard at the Seelinger house on Long Island, where his dad, Tom Seelinger, would toss a whiffle ball and Matt would swing with all his might.

“I remember holding a wide orange plastic bat and swinging away. I could get the ball over the fence quite often. My mother tells me I used to wait at the front window with my bat in hand for my dad to get home from work so we could play.”

It was both mom and dad that encouraged Matt’s passion, but it was dad who enlisted for hands-on duty. He was especially active once Matt joined the town Little League team.

“There is nobody that has a greater knowledge, love or passion for the game than my father. He never doubted my abilities. Stood by every strike, ball or walk. Always ready with advice and guidance. Cheered me on, and when necessary, gave me the critique I needed to adjust or get past a bad outing. I would not be here if not for him.”

Fast forward a few years to high school, where Matt joined the team as a pitcher. He says it was during his junior year that he began “turning it on,” as his dream of becoming a pro began to take shape.

“Every boy that starts out in baseball wants to be the next ‘Jeter.’ I wanted to be a professional. Baseball was my focus. I started to really realize that at the end of my junior year. Recently my friend showed me a text that he saved that I had sent him in 2013, right after I graduated high school, and before I even pitched one game at Farmingdale. In the text I told him I guarantee I am going to get drafted at either the end of my junior year in college or at the end of my senior year. I was that focused and wanted it that badly and had the confidence in my abilities as a pitcher to get there.”

And Matt had the stats and awards to prove it. In his last year of high school he was named to the All-State, All-Conference and All-County teams, and topped off the season with the most wins of any high school pitcher in the county. Next came college and a whole new set of challenges. He was accepted at several schools – in Divisions I, II and III – but decided to stay close to home and chose Farmingdale. The tipping point was head baseball coach Keith Osik – who, coincidentally, played for the Pittsburgh Pirates from 1996 – 2002 – and his penchant for playing talented newcomers.

“Farmingdale just seemed to fit me best,” Matt explains. “Coach Osik had a reputation for playing freshmen if they could show their stuff. I wanted to play every day. Coach Osik gave me that opportunity.”

In his junior year – as he was on his way to setting school records again with his patented “knuckle drop” pitch – Matt started noticing scouts in the stands.

“That is why you must always be in top performance mode. Don’t argue, don’t show up the other team or your teammates. Have respect for yourself, your teammates and the game itself. The Pirate scout reach out to Coach Osik to request my contact information, and we then began emailing.

“He advised me that there are no guarantees. He told me they liked my stuff. The rest is a long, nail-biting time. But once you get that call, you forget about all that stuff. It’s the best feeling ever.”

So too for Tom Seelinger, who missed only three games in Matt’s long career in organized ball – and that was because he was recovering from back surgery. 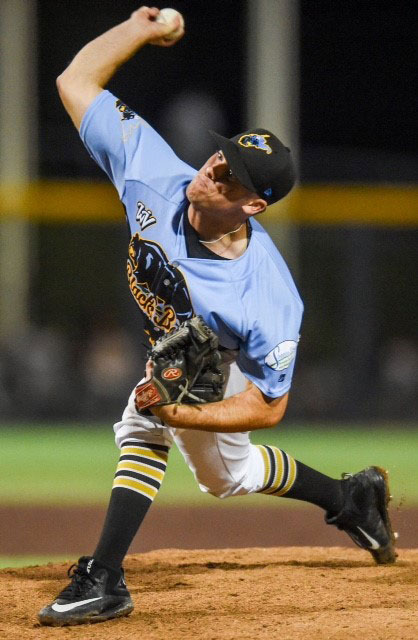 “We were jumping up and down,” Tom says, beaming with pride. “It was a great Father’s Day gift. This is icing on the cake. We went out and bought lots of Pirates gear.”

Within days Matt was in Pittsburgh signing a contract.

Welcome to the pros

“Going to PNC Park in Pittsburgh was literally like a dream come true. The Pirates organization is first class. The day of the signing was exciting. Sitting in the conference room where so many famous players came before me to sign their contracts was surreal. Words cannot come close to how truly mind-blowing it was.”

Next stop was his new team, the West Virginia Black Bears, of the Class A Short Season New York-Penn League. He caught up with them in Williamsport, Pennsylvania – just in time for a 15-hour bus ride to Batavia, New York, home of the Muckdogs. Then it was on to Monongalia County Ballpark, home of his new team.

“I picked my number 51 and got my uniform. I am in the bullpen for now. You start with one inning of work then add an inning at each new appearance. My debut was at home, and I came in the 6th inning. I wish I could describe how it felt seeing my picture and name on scoreboard as the announcer is saying my name to come in the game. I will never forget that moment. When the gates to the bullpen opened and I went running towards the mound it was like no other feeling in the world.

“There was a crowd of about 1,700 fans. The most I had ever pitched in front of. I had butterflies, but I knew I had a job to do. Fans look at the game as fun, but this game is my job. In my first appearance I struck out two and got the third batter out on a two-strike pop up. I have six innings pitched with a 0.00 ERA, nine strikeouts, two hits and .067 WHIP. Batters are hitting .100 against me.”

Quite a debut, but not so surprising for a young man who set records throughout high school and college. Might we be seeing Matt on the mound against National League rival, the New York Mets, in a couple of years?

“I take nothing for granted. I continue to work hard every day. I want to get to the next level. It will not come easy, but I believe I can do it. I can now call myself a professional baseball player.”

And one heck of a SUNY alum as well.