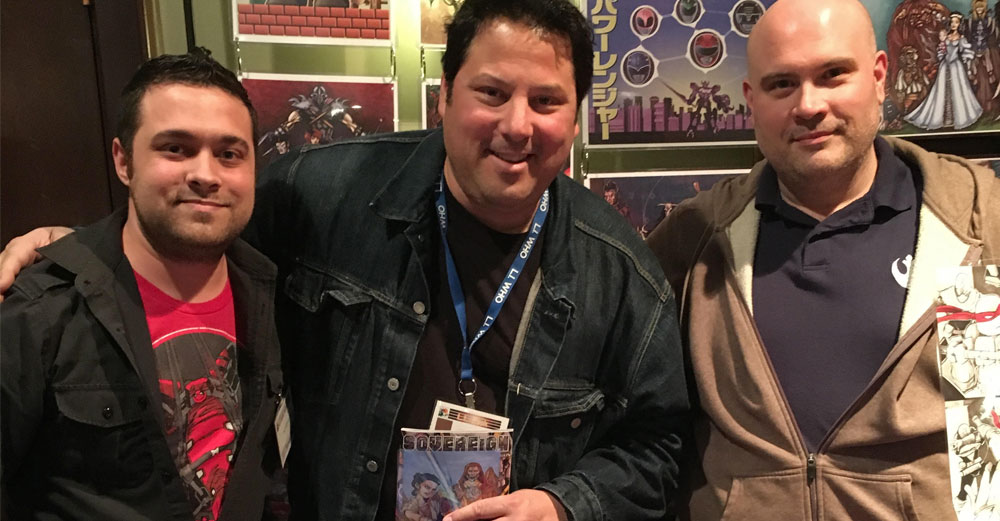 The Star Wars universe is showing no signs of slowing down any time soon. New characters Rey and Finn leading the way in the latest movie trilogy, along with numerous comics, movie spin-offs, and even a theme park in development. Did you know that one of the people bringing us closer to these worlds is a SUNY product?

He’s drawn Hans Solo, Batman, Thor, and C-3PO. Not to mention Obi-Wan Kenobi, Teenage Mutant Ninja Turtles and a slew of other fictional heroes. If you’re a diehard fan of the films and comic books in which these characters exist, you’ve probably seen Michael Mastermaker’s work.

If not, don’t look for it in comic books or graphic novels. Instead, visit your neighborhood Wal-Mart and Target stores and ask for collector card sets of Star Wars (too many to name), X-Men, Walking Dead Season 8, Terminator 2 25th Anniversary, WWE wrestlers, Guardians of the Galaxy Vol. 2, Thor: Ragnarok, and others.

Yes, Mastermaker – visiting assistant professor in the visual communications department at Farmingdale State College – works in a very specialized field, one in which he has carved out a Hulk-sized niche. What else would you say about an artist who regularly draws highly prized card sets for Lucasfilm, Marvel, Topps, Fleer, Masterwork, Cryptozoic and Upper Deck?

“It’s taken a ton of dogged determination,” Mastermaker said. “Step One was draw a lot… then draw some more. Step Two was to build up a social media presence, posting three to five times a day, every day. All original drawings. 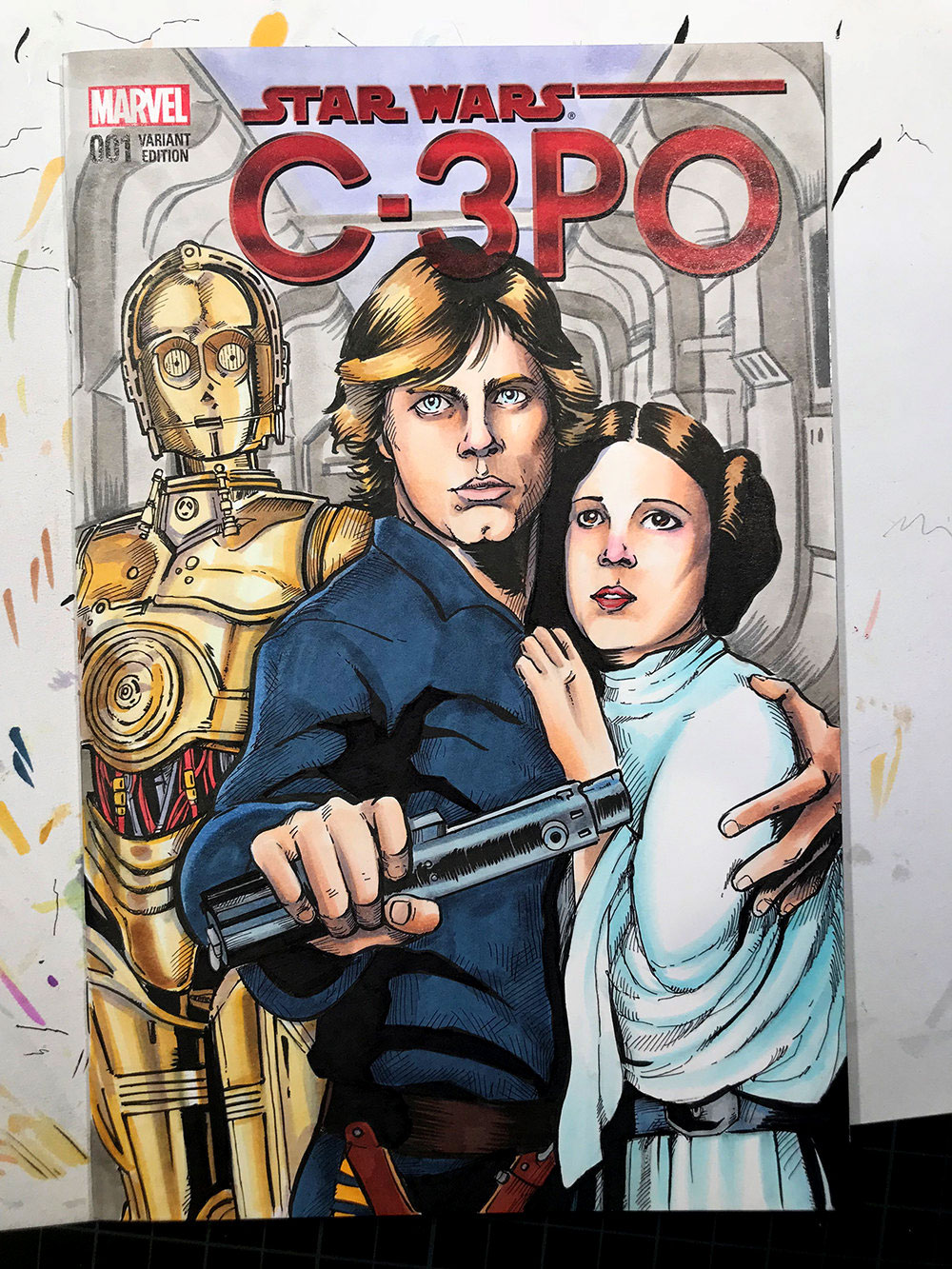 “Finally I started submitting work, and it took a while. Lucasfilm was first to give me work, but I had sent samples in at least four or five times, always different samples so they could see I was productive and improving. Marvel was even harder – maybe eight submissions? Eventually I was given small projects to test me out. I’m fast and reliable. Then I was doing conventions and meeting more and more people. I was meeting art directors face to face, which helped. I wasn’t just a name on an email, and from there it snowballed.”

Not only that, soon Mastermaker was drawing characters he’d been devoted to for years.

“Star Wars cards for Topps are easily the most rewarding and fun. Contributing licensed artwork of characters I’ve loved my entire life is just crazy. Masterwork allowed me to draw anything I wanted from any of the Star Wars movies and cartoons, and I loved that.”

Mastermaker is on the convention circuit too. At one he had an encounter with a Star Wars actor, which turned in to something he couldn’t have imagined in his wildest dreams.

“At one convention, which was HUGE, Greg Grunberg, who played Snap Wexley, one of the pilots in the The Force Awakens, was a guest. He came into the artist room, walked around a bit, and came over to my table. He loved the work and was chatting with me for a few minutes. He bought my graphic novel, which was huge, but I had an illustration I did of Rey training with Luke Skywalker – this was long before the Last Jedi came out. It was just something I did for fun. Greg says, ‘I have to buy this, man!’ I thought that was great, and thanked him. Then he says ‘J.J. is gonna love this, man!’ He bought my sketch and gave it to J.J. Abrams!” (Abrams is a Star Wars director/producer/screenwriter.)

Grunberg obviously loved the same things about Mastermaker’s work that he has been hearing from other fans for years.

“People love my line work and inking style. I’ve had people at shows tell me the speed at which I draw, combined with the quality, makes me really unique. I’ve always been praised for detail and imaginative design, particular in regards to things like vehicles and robots.”

In addition to teaching at Farmingdale, Mastermaker earned an associate degree in advertising art and design from the College in 1998. He already had a budding career in comics when he arrived – he’’d been drawing professionally since he was a teen – but at Farmingdale he learned some things that helped propel him to the next level.

Before enrolling at Farmingdale, he’d been accepted to several art schools, all far away from his Long Island home. But he wasn’t sure if college was for him, and didn’t want to go into massive debt only to find out he was right. He enrolled at Farmingdale because it was close to home and affordable. But, as he suspected it might be, at first he was a little uncomfortable with his surroundings.

“I didn’t really understand exactly what I was in school for. It was commercial art, at a time when digital was becoming the industry standard. It was a very strange time for graphic design. But by the second year I understood what I was doing, and really started to enjoy my time a lot more. Plus, I have to say, I received an outstanding liberal arts education.”

Another thing Mastermaker learned while at Farmingdale was that he was developing a passion for teaching. It started when he was asked by a local art league to teach young teens about comic book illustration. He loved it and decided that once he’d graduated college he would continue his education with the idea that he would teach high school. But he was shocked by what he saw in the teacher’s lounge.

“The teachers, they were miserable. The kids were great, but I just did not fit in at all with anyone that worked at the school. It just wasn’t the life for me at the time. The teachers treated the students like enemies. It was so odd to me. Everyone was angry, all the time it seemed. I rarely saw anyone smile.”

A few years later, while working for book publisher Harper Collins, Mastermaker got a call from a professor at Dowling College (where he’d earned his Master’s in Visual Arts), who invited him to teach an illustration course. Mastermaker was thrilled – but nervous too.

“I loved it. I think I got over being nervous when I realized I was genuinely good at establishing a rapport with the students. For the first few years I really wasn’t much older than them, to be honest. But as time went on my skill-set grew, and I became much more comfortable.

“It was a fantastic environment, the reverse of the high school I worked at. Everyone was happy, it seemed. Then, when they introduced more digital work to the curriculum, that was where I was most at home. When my mentor went on sabbatical for a year, I served as the interim director of the digital department, and it a fantastic learning experience.”

But, after a short-lived foray into designing and animating TV commercials, Mastermaker’s love of illustration resurfaced. He’d been offered a job at a studio doing commercial work, but backed out at the last minute.

“I turned it down and moved back to the Island, and I don’t regret it for a second. I made a ton of career choices because they were safe or easy. This time I went with my heart, and what I wanted to do: teach full-time and design part-time. And 13 years later, it has worked out fine.”

Mastermaker says it will continue to work out fine if he can stay on at Farmingdale. It will provide the opportunity to continue both teaching and his career as an illustrator. And speaking of illustrator, did we mention that Mastermaker has also produced his own fantasy/sci-fi graphic novel, Sovereign? He hopes to have Issue 2 out this summer.

“It’s about a young man with no memory of his past trying to find out where he’s from and what happened to him. The most important thing about it is that I finished it. Jake Parker, one of my favorite contemporary illustrators, has a great quote: ‘Not perfect, but done.’ I say it all the time.”

(Sovereign is sold out, but you can buy lots of Mastermaker’s work on his website, Warp Zone Graphics.)