From New York to Haiti, A Journey Brings Opportunity Through Education 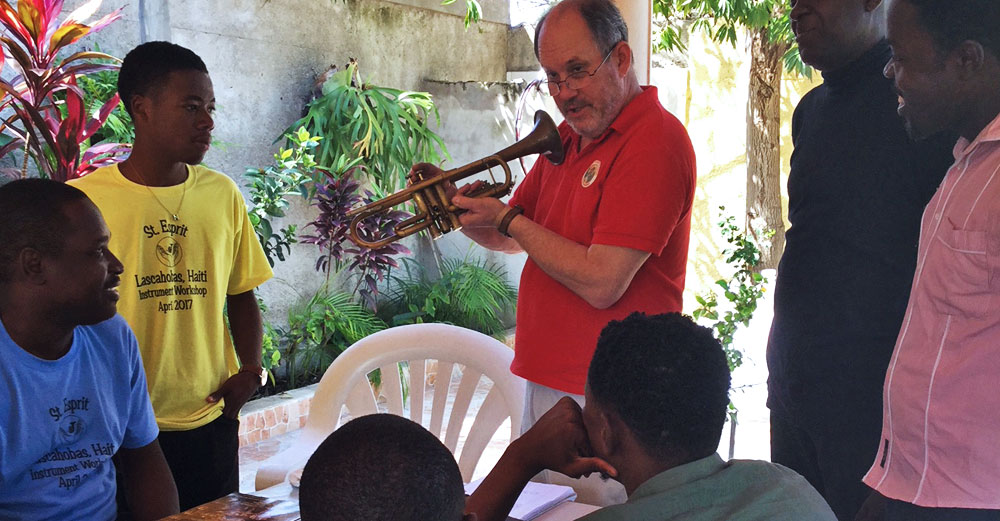 Over 40 years ago, Troy native Bill Cole started his business Cole’s Woodwind and Brass Shop, where now, he and his son, Billy, repair and sell (both new and used) musical instruments. His shop is currently located in downtown Saratoga Springs, NY.

Persuaded by his high school music teacher to continue studying music in college, Cole enrolled at Morrisville State College, one of the 64 SUNY campuses, where he learned how to fix different types of musical instruments. Soon after graduating with a degree in Musical Instrument, Cole opened his shop in Watervliet, NY.

While operating his business in “the Arsenal City”, Cole became involved with St. John’s Episcopal Church in Troy, which has a sister parish (and school) in Lascahobas, Haiti called Eglise St. Esprit (Church of the Holy Spirit). Through various members of the congregation, he learned about the parish band, and began donating instruments to St. Esprit through St. John’s Mission to Haiti.

Over the years, many of the band’s instruments were put aside because they needed repairs that were unavailable in their location. After hearing of the parish’s dwindling supply of functioning instruments and surplus of broken ones, Cole decided to take a trip to Haiti to fix the damaged equipment.

In April 2016, Cole packed his bags (full of horns and repair tools) and joined members of St. John’s Episcopal Church’s Mission to Haiti on their trip to Lascahobas to visit their partner parish, St. Esprit.

Set in a primarily rural area, Lascahobas is roughly 13 miles west of Haiti’s border with the Dominican Republic. As is the case in many regions of Haiti, most of the town’s inhabitants, around 8,000, live well below the national poverty line. Despite their hardships, Cole found the people of Lascahobas to have profound resilience and “complain about nothing.”

While his initial plan for the trip was to simply fix the band’s broken instruments, Cole ended up teaching a two-day instrument repair workshop at St. Esprit Church and School. Six students, all high school age young men, participated in the workshop, along with their maestro and translator. Cole described the students, only one of whom speaks broken English, as “bright and engaging.” He maintains that it was one of the most successful workshops that he has ever taught. He knew he had to go back.

Horns for Haiti is built

After returning to the United States, Cole named his project “Horns for Haiti,” gaining charitable support from customers and friends for his efforts in Haiti.

One year later, in April 2017, Cole made a second trip to Lascahobas by himself to continue teaching the same students who attended his workshop the previous year. He was very pleased to learn that the young men were putting the skills they had learned to good use; they had been repairing instruments for other schools and churches in the region.

When asked about the practicality of teaching these students musical instrument repair skills, seeing as agriculture is the primary market in Lascahobas, Cole smiled. He explained that in Haiti, music is a huge part of the culture, especially in church bands and choirs. Also, school bands play a variety of horns and string instruments for upcoming concerts, and local drumming and dancing celebrate traditional Haitian customs. In Haiti, music is what brings the community together. However, there are few shops in Haiti that can repair instruments, and none are located outside of the largest population centers. Learning to repair instruments could be a way for locals to earn a living in a place with scarce opportunities.

In the fall of 2017, Cole was introduced to Bennett Rathbun, Co-Founder and Executive Director of Hope on A String, through a mutual acquaintance: James Pasquill, Director of International Programs in the Office of Global Affairs at SUNY System Administration. Pasquill learned about the Horns for Haiti project during a dinner get-together with a friend of Cole’s, and immediately made the connection to Bennett Rathbun, who Pasquill had met through a work function about SUNY’s Sustainable Village and Learning Community (SVLC) Project in Arcahaie, Haiti.

Funded by the W.K. Kellogg Foundation, the SVLC Project is a collaborative effort involving 10 SUNY campuses and 5 not-for-profit organizations to develop a sustainable village and learning community in Arcahaie. Hope on A String, which was created in the wake of the catastrophic earthquake that devastated Haiti in January 2010, is one of the 5 SVLC Project partners. Among the goals of the SVLC is to create a place where SUNY students and faculty and local residents can learn from each other and develop projects that contribute to the well-being, education, and economic vitality of the region.

With a note to each, saying “I just took a look at both of your websites – you guys need to talk,” Pasquill introduced Cole and Rathbun. Talk they did, and soon after the two businessmen met in Westchester, NY, and began planning for a December visit to Haiti.

In December 2017, Cole returned to Haiti. This time, before returning to St. Esprit in Lascahobas, he spent the first part of his trip teaching instrument repair to the staff at a Community Center in Arcahaie operated by Hope on A String, Bennett’s non-profit organization that seeks to empower youth and strengthen communities in Haiti through music. The organization provides creative learning opportunities for youth to develop important skills and pursue brighter futures through training in the performing arts. They also offer music education classes for children enrolled in partner schools in the Arcahaie region. At Hope on a String, individuals participate in music, dance, and performance classes, as well as skill-building workshops and grassroots development initiatives that respond to community needs and goals. Hope on a String works with local organizations to build critical social capital, positive synergies, and collaborate on mutual goals that advance the community’s interests.

Only a few days ago, Cole returned from a fourth visit to Haiti, where he conducted more workshops, this time with the help of his son, at Hope on A String in Arcahaie and St. Espirit in Lascahobas. Looking forward, he hopes that one of his students, Mayande, from St. Esprit will be able to come to the U.S. for one or two weeks this summer to receive further instrument repair training at his shop in Saratoga Springs, NY. Cole plans to travel again with Rathbun and others involved in the SUNY SVLC Project to conduct more trainings in Arcahaie in the next year.

Rosemary Ortlieb-Padgett, Director of Learning Through Development and Project Manager for the SUNY SVLC Project, commented that “Cole and Rathbun working together with the Haitian people to bring music and economic advantage to the region is just the kind of outcomes we are working toward. That’s what it is all about. And it’s cool that a SUNY alumnus is bringing his skills to the area.”

If you’d like to get involved, you can find more information or make a donation via the websites for Horns for Haiti and Hope on a String. 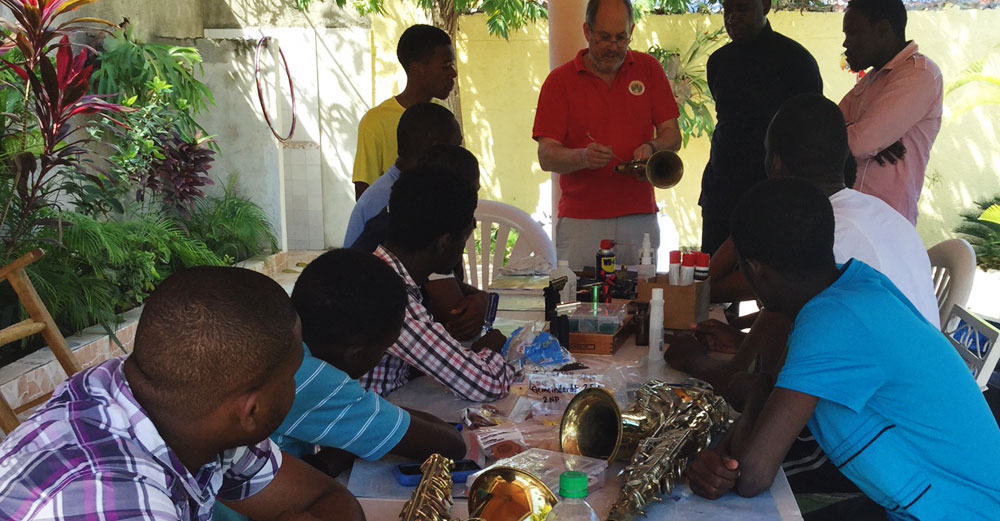