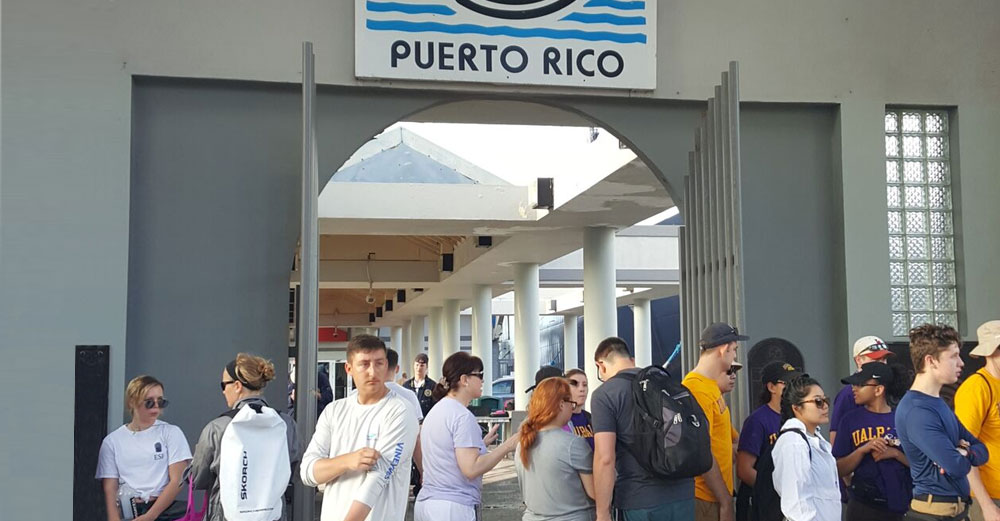 In September 2017, a Category Four storm known as Hurricane Maria hit the Commonwealth of Puerto Rico, a U.S Territory. With widespread flooding, power outages, and hundreds of homes destroyed by the tropical storm, Puerto Rico was stripped of its lush landscape, and the widely popular tourist territory became devoid of its attractions for weeks. Unfortunately, the recovery has been moving along slowly ever since.

When exposed to the news, many U.S citizens were shocked and devastated. Thankfully, New York State was ready to step in and help, which is why Governor Andrew M. Cuomo announced the NY Stands with Puerto Rico Recovery and Rebuilding Initiative, an effort that includes sending a large number of SUNY and CUNY students to Puerto Rico, which started on June 17. As part of the initiative, students will take part in a two-week program where they will receive college credit for working to help the many citizens that are still impacted today and left homeless because of the catastrophic hurricane and its destruction.

Many U.S citizens, when exposed to the news, were shocked and devastated. New York State was ready to step in and help, which is why Governor Andrew Cuomo announced the NY Stands with Puerto Rico Recovery and Rebuilding Initiative, an effort which would include a large number of SUNY & CUNY students headed to Puerto Rico starting June 17. Students will take part in a 2-week program where they will receive college credit for working to help the many citizens that are still impacted today and left out of their homes because of the catastrophic hurricane.

Students from SUNY Maritime College, SUNY Albany, and SUNY-ESF were the first to spend a few days aiding Puerto Rico during May in a program led by SUNY – one could call this a test run for the Puerto Rico Recovery and Rebuilding Initiative. SUNY Maritime was set to depart for their annual Summer Sea Term, so the ship and its cadets traveled to Puerto Rico to provide assistance for three days with students from the other SUNY schools. Students were split into groups in order to assist locals in various jobs such as cleaning areas where large trees and debris blocked access to cities, replanting fruits and vegetables to replace destroyed crops, and reconstructing community centers that were hit during the hurricane season.

As we prepare for the full rush of students heading to the island, we were able to gather some students’ reflections and stories about the volunteer experience they recently were a part of.

Fantastic to see so many students joining our initiative to help Puerto Rico build back stronger.

“All along the riverbank were many fallen trees, debris, and overgrown plants, which were starting to encroach on the sidewalk,” said SUNY Maritime student Daniel Knowles when he and other Maritime students volunteered to aid Puerto Rico in repairing massive damages that were done to the island. To make matters worse, Hurricane Irene and Hurricane Sandy, two of the most deadly hurricanes during 2011 and 2012 that Puerto Rico had not fully recovered from, and Hurricane Maria left the island in an even more debilitated state.

“I was placed at a community center in Morovis. This was a small town that lacked easy access. It took many back roads and twists and turns to get there. During the storm, and for weeks after the storm, the town could not be accessed. We were assigned to clean and repaint the community center gym as well as clear out the baseball field adjacent to it. My team and I worked continuously throughout the day and actually finished the whole building. As we were finishing, a couple locals in the area rode up on horses to thank us. We were very happy because we saw how excited they were for the center to be in use again.” 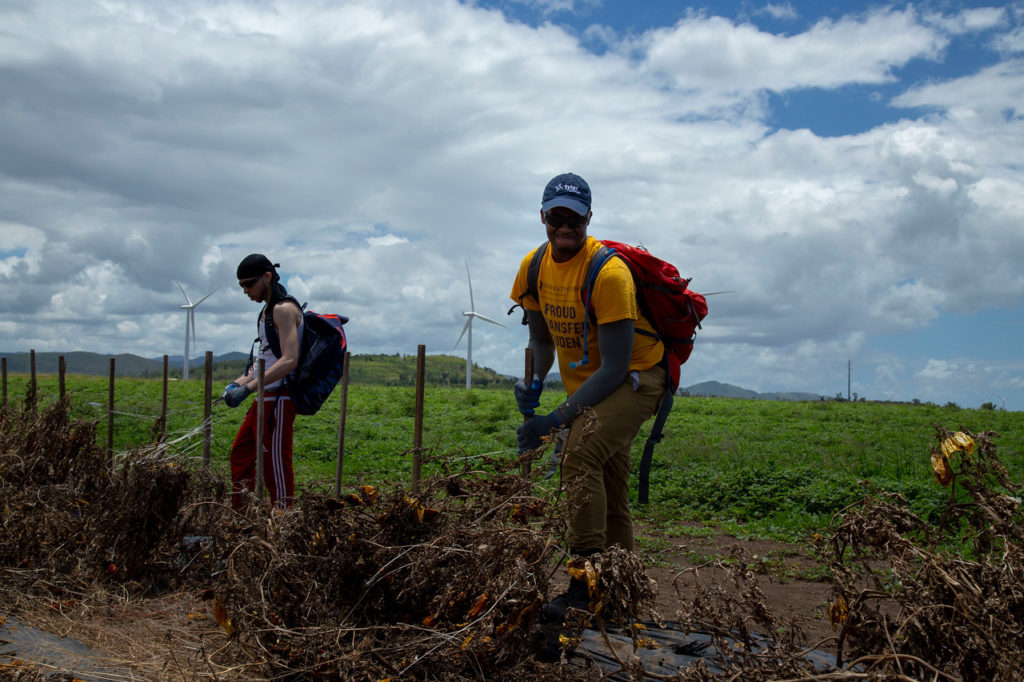 Through Governor Cuomo’s initiative, SUNY and CUNY student’s have a chance to get a real look at the hardships that Puerto Rico citizens are overcoming. They also gain first-hand knowledge and skills training that can raise awareness about the issues in Puerto Rico.

One SUNY ESF student, Devon Camillieri, took away an experience that she will never forget:

“The memory of one Puerto Rican will always stay with me. Her name was Olga, and she had opened her house to us so we could use her bathrooms. It was an inconvenience to her, to have stinky, sweaty workers trampling into her house, but she always greeted us with one of the kindest smiles I have ever known. She gave me and two others a tour of her house and took us out on her porch. The other two, Mallory and Nina, both spoke minimal Spanish, and because I didn’t I had more opportunity to absorb my surroundings. Her porch was beautiful; it overlooked the river whose banks we worked on.”

With the power being out for many months, locals had to make do with what little they had left and thought up of creative solutions to problems they faced during the aftermath of Hurricane Maria.

“But, instead of being entranced by the view, a bungee cord strapped around a porch column caught my eye. Pinned between the elastic and the wood were a disposable razor and a handheld mirror. The more time we spent in Puerto Rico, the more we heard of how long the residents had been without power. For some, it had been months, and for others it was indefinite. I was incapable of fathoming just what that meant for daily life until I met Olga and stepped foot on her porch. They had been without power for so long that her husband had to find a way to shave. The bathrooms only offered a small window with minimal light,  so they came up with a way for him to utilize the daylight by shaving outside on their porch. Now, I hope, that my family would be able to come up with such a handy solution if we were ever in the same situation, but I also realize my privilege.

My family has never had to come up with such a permanent solution for shaving because we have never been threatened with the lack of power for an indefinite amount of time. Olga and her husband have no such privilege. They live in Utuado, deep in the interior of Puerto Rico, where there are one-lane streets, horses roaming, possibilities of flash floods, and they have not had power for months.”

As further described by Devon, instances like this really put into perspective how perseverant humans can be:

“Olga and her husband are living in less than minimal conditions, but they were resilient, and still find it in their hearts to welcome complete strangers who barely speak their language into their home. This, to me, embodies my experience in Puerto Rico. I met people whose hearts were big and grateful to those who were trying to help. Before this trip, I didn’t understand that gratitude, and kindness, are universal and have no language barrier, but thankfully, now I do.” 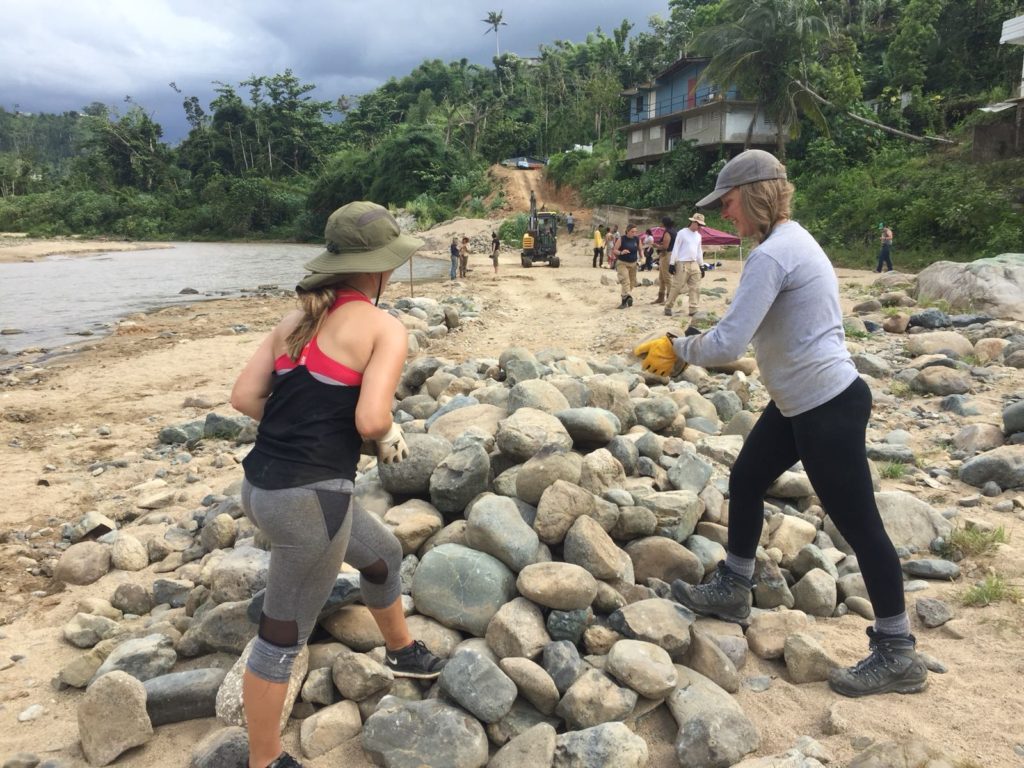 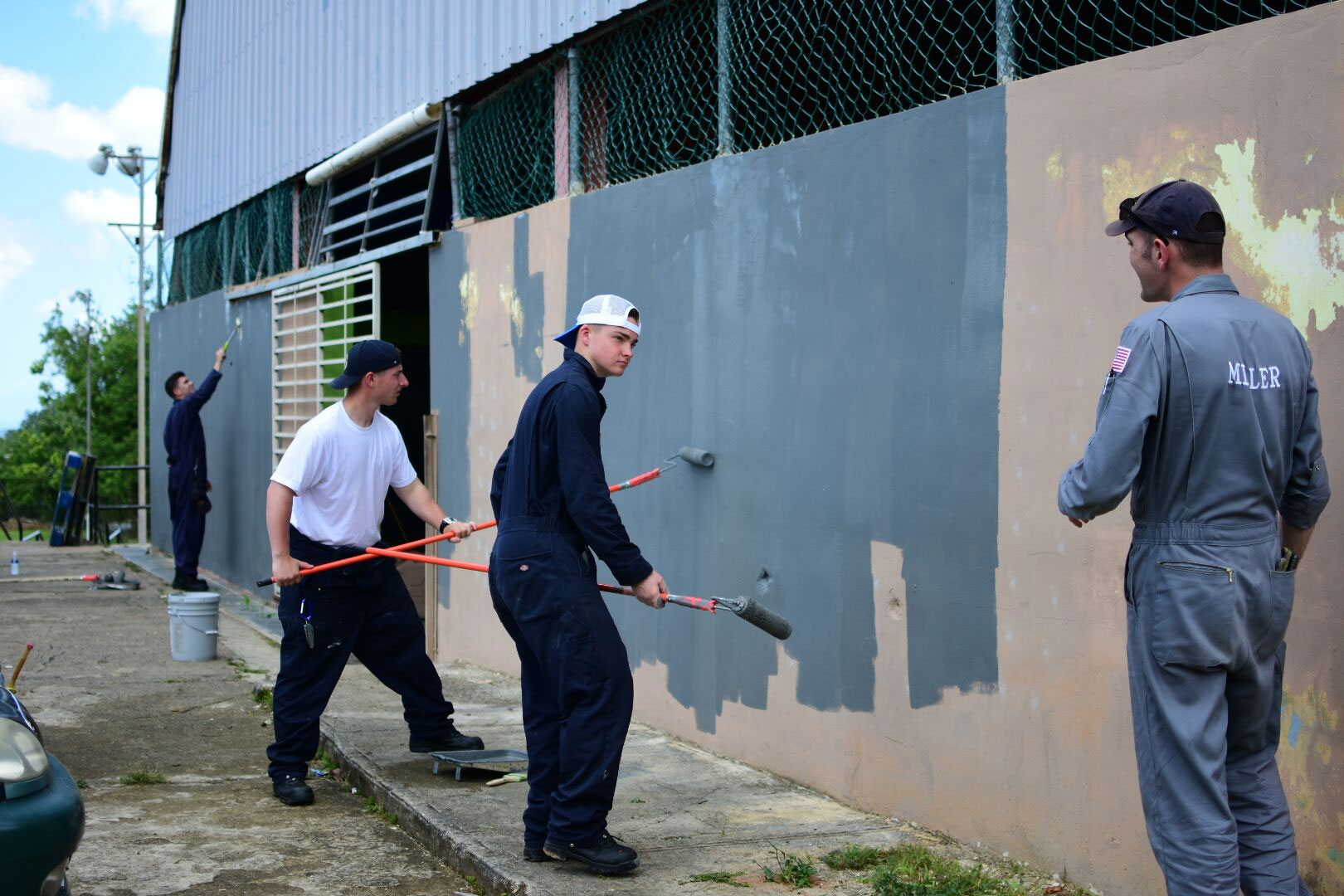 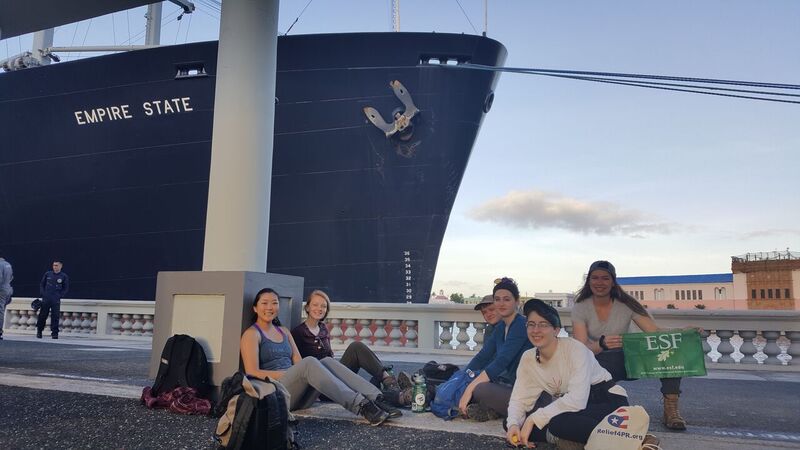 SUNY ESF students wait to to head inland to help out communities in Puerto Rico.

The Beginning of a Full-Scale Effort


SUNY System has backed Governor Cuomo’s initiative since day one, and Chancellor Johnson is familiar with the conditions on the island and is in full support of the recovery mission and opportunity for our SUNY students:

“As the largest comprehensive system of higher education in the hemisphere, SUNY has the unparalleled knowledge and infrastructure required to help build safer, more sustainable, and resilient communities in Puerto Rico. We are pleased to support Governor Cuomo’s NY Stands with Puerto Rico Recovery and Rebuilding Initiative. It has been nearly eight months since the T.S. Empire State VI and its crew returned home from its first recovery efforts for the island, with support from SUNY and the Impact Foundation. SUNY is proud of The Maritime Academy, its summer at sea cadets, as well as the students from University at Albany and SUNY-ESF, for their relief efforts and hundreds of students who will be in Puerto Rico helping support and rebuild communities working with our academic partners and our fellow citizens in these territories.”

There are a number of students from Puerto Rico who make a SUNY campus their home while at college. SUNY students are ready help them and their families and neighbors out by rebuilding damaged communities, clearing roads, and helping Puerto Rico become stronger for years to come. As more SUNY students head to the Island for Governor Andrew Cuomo’s Puerto Rico Rebuilding and Recovery initiative throughout the following months, we will continue to post more student stories and reflections, so stay tuned to see how our SUNY students are making a difference. 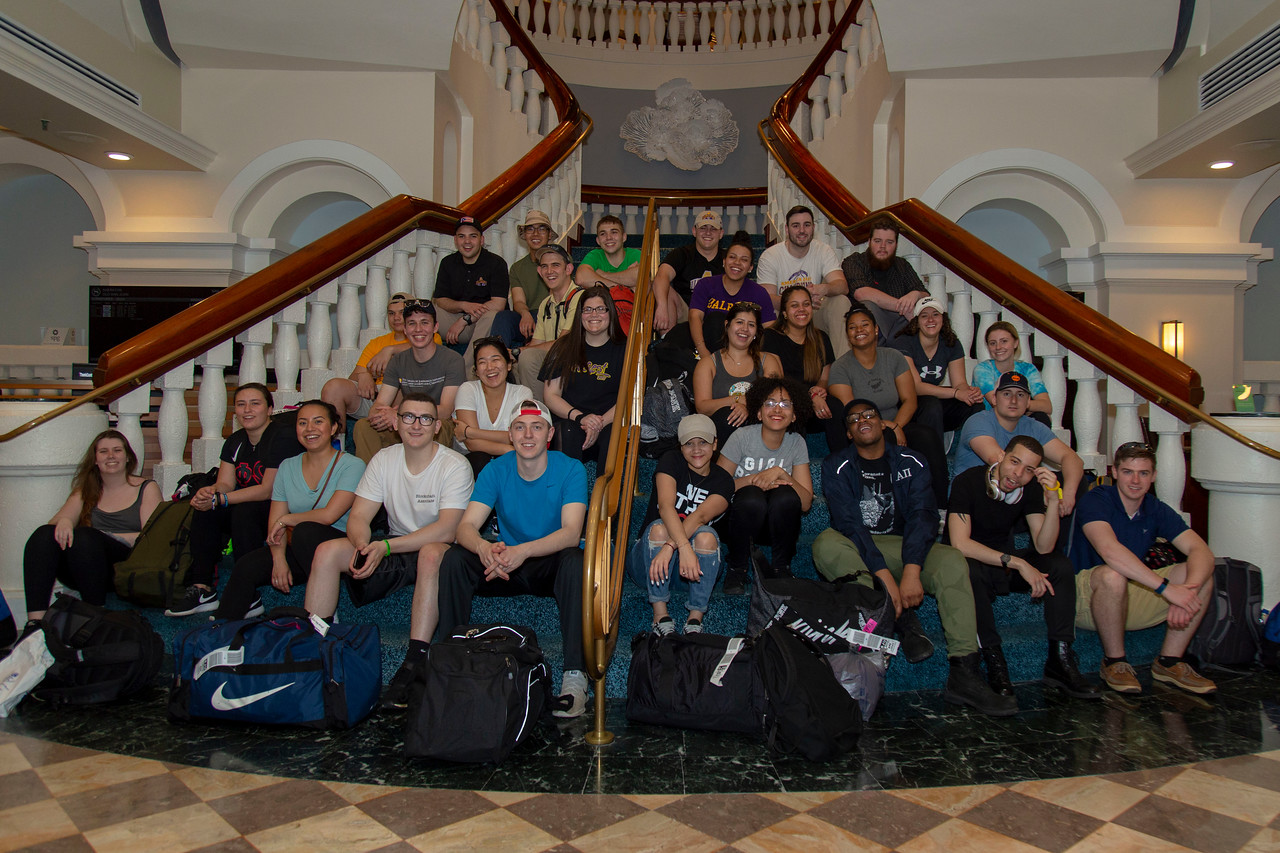