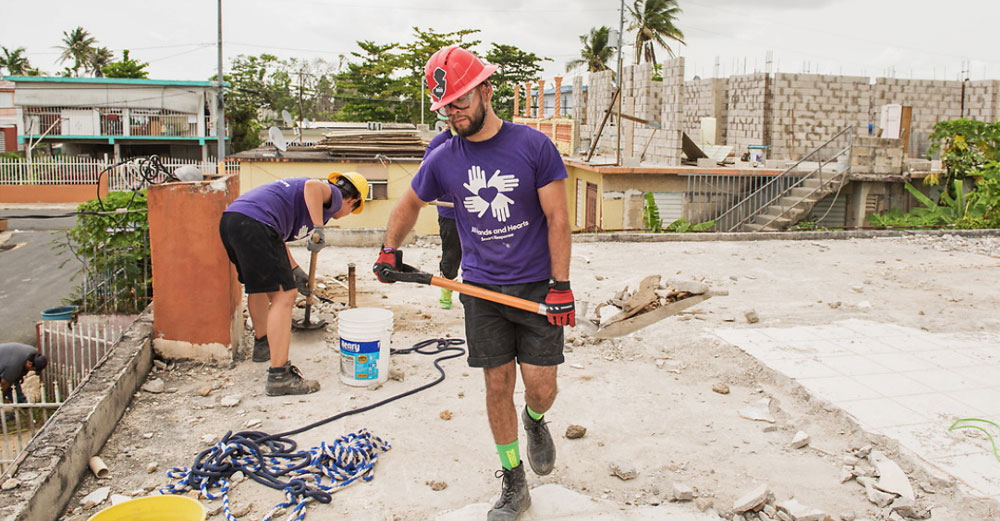 During the summer of 2018, The New York Stands with Puerto Rico Recovery and Rebuilding Initiative set out to help the island move forward with recovery efforts that are still struggling to put residents back in homes that were safe and secure. Between the State University of New York and the City University of New York, 500 students were sought to head to the island as volunteers to assist with these efforts, while earning college credit in the process. The response was overwhelming.

To date, 90 homes have been cleaned, restored, and rebuilt across the island, indicating that New York State is well on its way to reaching its goal of 150 homes renovated through the initiative. So far, over 400 students (147 SUNY students) and labor volunteers have dedicated more than 25,000 hours to the initiative, and with two major deployments remaining, New York State will have mobilized more than 500 student volunteers and over 100 skilled labor volunteers to assist with recovery and rebuilding efforts this summer.

Governor #Cuomo’s #NYStandsWithPuertoRico Initiative: 90 Homes restored and rebuilt, On target to reach goal of 150 homes renovated throughout the 10-week initiative, To date over 400 #CUNY/#SUNY students and #NYCBuildingTrades have dedicated 25,000+ hours to rebuilding efforts pic.twitter.com/QL8jrbARUl

As part of the NY Stands with Puerto Rico Rebuilding and Recovery initiative, student volunteers deploy for two weeks at a time and have the opportunity to earn college credits for their work. Volunteers with the New York Building and Construction Trades continue to deploy in two-week waves throughout the summer. In addition, UNICEF USA has committed at least $500,000 in funding to support this effort.

Issac Deleon, a broadcast journalism major at SUNY College at Brockport spoke to how far behind some of the recovery progress remains on the island, “I thought that when we got here we would be doing a lot of constructing and building roofs, but we are doing a lot of deconstruction and mucking and gutting which is post-disaster relief – helping clean up some of the homes and break down some of the houses that need repair before we are constructing.”

Deleon, who concentrates on media production spoke about some of his goals while in Puerto Rico:

In addition, Kim Piatt of the College at Brockport, and a chaperone on the trip has witnessed a lot of positivity during her time volunteering:

“For me as a chaperone, it’s been really rewarding to see these students growing so much because they really have in their daily reflections and in our conversations, they talk a lot about how this experience is changing them and impacting them and allowing them to think differently about the communities they have been in and spend time in, so I think that’s been cool.”

The ongoing deployments follow the second phase of the initiative launched on April 29, in which the Governor deployed a Tactical Assessment Team to develop a comprehensive rebuilding plan for the island. The Assessment Team’s findings continue to guide the deployments throughout the summer. Three prior deployments on July 15, July 1, and June 17 each included more than 100 SUNY and CUNY students and volunteers, and over 25 skilled labor volunteers.

For more information on SUNY’s involvement with the recovery and rebuilding initiative in Puerto Rico click here.