A Look Back to 1989, Where Students & Faculty Led Efforts to Rebuild Communities Damaged by Hurricane Hugo 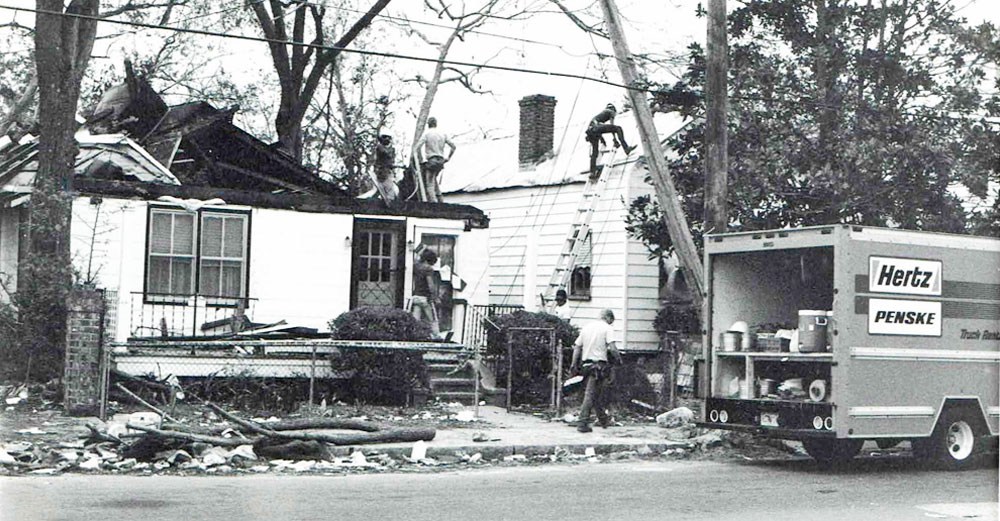 Making communities a better place in which to live and learn has been a major priority at SUNY for decades. Our campuses are a part of our New York communities and our students are more than willing to be a part of both to ensure both are healthy and strong. We can’t forget that our communities stretch even beyond New York State, as many students travel from far away to learn and study at our 64 colleges and universities.

At SUNY, our students do not merely look to what is in direct line of sight for community engagement opportunities. For decades, SUNY has looked across the nation for communities that may be in need in order to provide applied learning opportunities to students. We’ve shared stories this summer of our work in Puerto Rico helping the island recover from devastating hurricane damage, as well as the efforts in helping a town in Haiti develop it’s own Sustainable Village and Learning Community.

Did you know that these current day efforts share similarities built on long ago established service efforts at SUNY? Way back in 1989, when Hurricane Hugo struck the town of Charleston, South Carolina, SUNY plaid a role in helping the area recover from the damages. Richard Harrington, a professor at SUNY Delhi at the time, was a leader in organizing a trip that took students and faculty to South Carolina to lend a hand in repairing the damaged spaces. We were lucky enough to find him and learn of the experiences he lived through and the lessons he learned and carried forward from those efforts to today. Our conversation with Richard, and details of his experiences, follows.

SUNY: How was the trip to Charleston, SC organized? What made Hurricane Hugo a cause of concern for SUNY students and staff?

Richard Harrington: It was parents weekend and we were suffering through the remnants of Hugo. We had all seen the Charleston devastation on TV, so it was a topic of discussion. I was talking with the VP of academics at SUNY Delhi and made a statement that I thought our Carpentry program students could help. We contacted the Mayor’s office in Charleston (Mayor Riley) and explained that we were interested in volunteering.

We asked Charleston officials about food and lodging and they said they could provide it. Lodging was an older multi-story hotel in the heart of the city. Oneonta Bus lines donated the use of a bus (Mr. Vogt had driven part time for them prior to our hiring him.) and we had an alum that worked for Penske Truck Leasing that lent us a truck. Our Hotel & Management faculty used connections to get us lodging at the midway point of the trip (each direction). We had many donations of cash from the local community that fueled our bus and truck. Fluor-Daniel (large national construction company) donated $2000, a gentleman walked in off the street, shook my hand and in it was $500 cash, local church groups donated clothes and bedding. The support to make the trip happen was overwhelming.

SUNY: How many went on your trip?

RH: 2 faculty, 19 male students, 1 female student. Sarah was the female student and she came to see me in my office and said she would like to go, but she understood that as the only female, the logistics might be a problem. Turned out there were no problems at all. We worked it out.

SUNY: What were your first impressions when you arrived in Charleston?

RH: As we were driving along I-95 we began seeing trees down and highway signage destroyed. The trees that had crossed the highway were trim to the edge of the driving lanes only. Exit signs were sometimes propped up on the side of the road, but sometimes non-existent. Entering downtown Charleston, the city buildings were for the most part intact, but the trees were gone. The hanging Spanish moss southern charm look was “gone with the wind.”

SUNY: What did you mainly assist with/What did an average day look like?


RH: When we arrived in Charleston and made connections with the Mayor’s office, the expectation was we would do cleanup work. They were surprised when we told them we were there to start repairing homes. They did not expect the talent and equipment we arrived with. 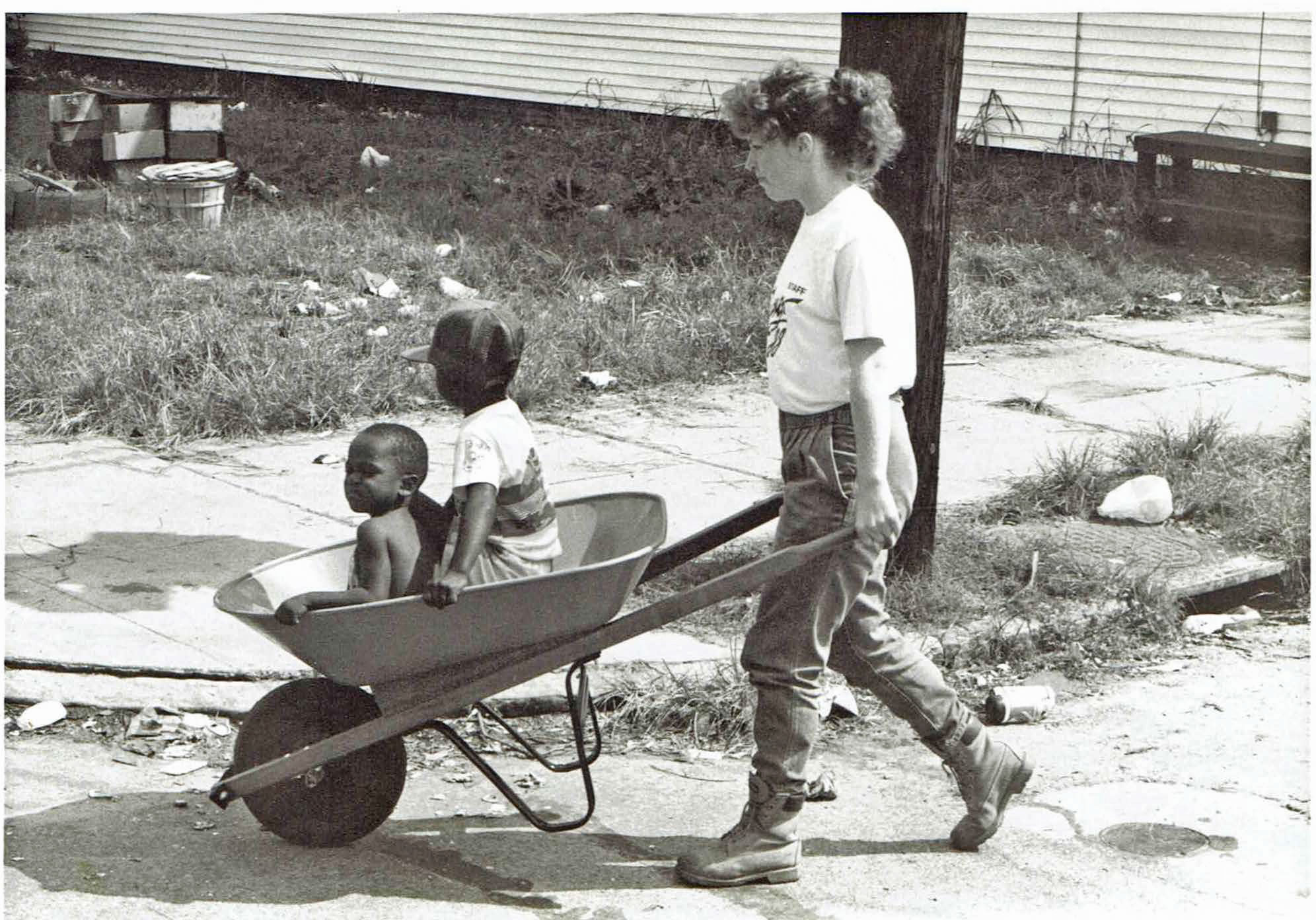 They ended up sending two city workers from the Department of planning & Urban Development. The first day we sort of were overwhelmed by the amount of work that needed to be done. We went with the intention of doing roof repairs and shingling, but we quickly realized that we needed to do temporary dry-in to make the home livable again. Building material donations were flowing into Charleston and were stockpiled at the port under the supervision of the Army National Guard. Someone had donated roles of vinyl swimming pool liner and we used that and wood furring strips to put a somewhat temporary cover on the homes (all two story row house with 12:12 pitch (45 degree slope). The first day we may have done 4 houses, by the end of the week we were doing 35 or so. At the end, we ended up doing about 250 total roof dry-ins.

SUNY: What did the locals think of your presence in the area?

RH: The first day we were looked upon with great suspicion. (We were the only Caucasians, to put it politely.) I remember 2 gentlemen sitting on their front porch with their revolvers clearly showing. By the end of our stay they were feeding us, and it was sort of one big block party. We hugged, kissed, shed some tears together and laughed.

SUNY: Any distinct memories from your time in Charleston?

RH: After we returned to Delhi, I remember saying to Floyd that that was probably the pinnacle of our lives. The bonding we had with the students, the citizens of Charleston, the West Point captain that ran the materials depot, and the reactions of the Delhi Community left no doubt that we had been involved in something special. One neighborhood we worked in had pecan trees and pecans were all over the ground. I recall picking one up and using a hammer to crack it open. A local came over picked up two pecans and placed them in his/her palm and cracked them open, basically explaining to me this how you do it. On Saturday, downtown Charleston has a flea market, the location is at the Slave Mart, which was once used just as the name describes. It was a series of stone/brick sheds that were cages at one time. As an outsider, the images still haunts me when I think of it.

SUNY: What lessons or morals have stayed with you since then?

RH: People respond to their exposure, when the exposure comes from the media, it comes with the bias of the media source. When the exposure is direct you judge based upon the individual and gradually the learned bias disappears. In two weeks we observed bias vanish.

SUNY: How does the situation and SUNY’s current efforts in Puerto Rico resemble that of Charleston in 1989?

RH: The images are very similar. One thing I do notice about Puerto Rico now is the infrastructure is passable, roads cleared, roadside trash removed. However, the damage to structures and property looks somewhat similar to what we saw.

SUNY: Do you have any advice for SUNY students going down to Puerto Rico, or any other far off area, to assist in humanitarian/recovery efforts?

RH: Do it. I would also suggest that the individual student efforts be rewarded.  It could be in the form of credits (real life social science) or tuition waivers.

In recent light, many SUNY and CUNY students went down to Puerto Rico to help with the damages done to the Commonwealth by Hurricane Maria. Students who head to Puerto Rico for this excursion get an Applied Learning Experience that lets them see that just one person can positively impact a community. From Hurricane Hugo to Hurricane Maria, we want to make sure that hardships are not faced alone. Each of our SUNY campuses are coming together and using the Power of SUNY to make change happen.