Two Researchers, Two Colleges, One Invention That Brought Us the Medical MRI 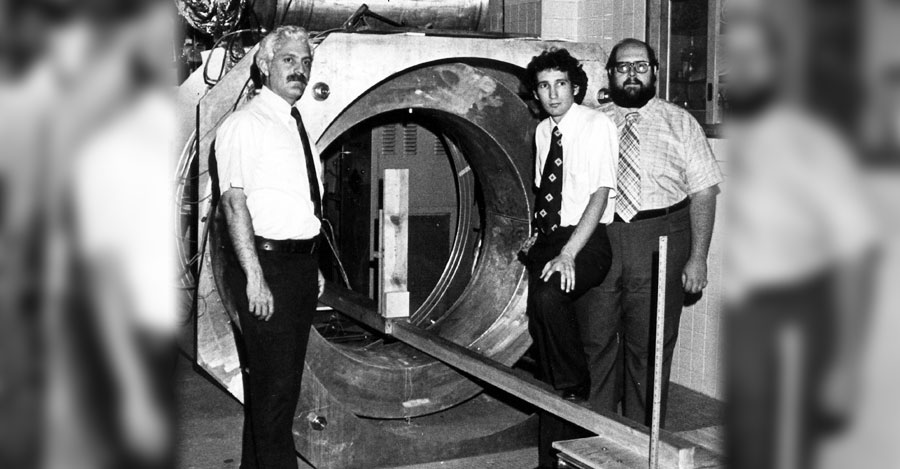 It can detect a brain tumor, a blocked blood vessel, a kidney infection, or a torn ligament. Magnetic resonance imaging (MRI) is one of the most important innovations of the 21st century, benefiting millions of people each year. Did you know that two SUNY researchers were the first to harness MRI technology for use as a medical tool? Their stories of research and discovery are interesting tales.

It was 1969, the year that Neil Armstrong walked on the moon, Richard Nixon was sworn in as president of the United States, and Led Zeppelin released its first album. Through all of this, Raymond Damadian was busy working as a physician/scientist at SUNY Downstate Medical Center in Brooklyn. He was using nuclear magnetic resonance (NMR) to investigate potassium ions inside cells when he made an important discovery—potassium “relaxation times” were much shorter in cells than in distilled water.

To explain, when an element, like potassium, is placed in a magnetic field, its nucleus aligns with the magnetic field similar to the way a compass needle aligns with magnetic north. If the element is then targeted with radio waves, the nucleus becomes “excited” and switches direction. The amount of time it takes for the nucleus to “relax” back to its original state can be measured and turns out to be unique to specific elements.

Damadian first published his observation about potassium ion relaxation times in the journal Nature in 1970 and, in a “Eureka moment,” subsequently theorized that magnetic resonance technology could be used to detect cancerous tumors. He successfully tested the idea with water, finding that the relaxation times of the hydrogen nuclei in water differed significantly between cancerous and healthy tissues. He published these findings in Science in 1971, in a paper that would become a landmark Citation Classic; in March, 1972, he filed a patent with the U.S. Patent Office for an external NMR scanner and method of operation based on tissue relaxation times. It was the first patent in the field of MRI; today more than 4,500 patents exist in the field.

Meanwhile, Paul Lauterbur—at the time a professor of chemistry and radiology at Stony Brook University—took the idea a step further. He figured out a way to focus NMR signals so they could zero in on the specific locations of anomalies in the body. He did this by creating gradients in the strength of the magnetic field, which allowed for the creation of 2D and 3D images, basically providing a visual map of problem spots in the body.

It was a novel idea. Previously, NMR machines had relied on a uniform magnetic field to detect the tiny differences within molecules’ magnetic fields. Yet, these systems were unable to detect spatial information.

Lauterbur published his imaging idea, along with the very first magnetic resonance images—consisting of two one-millimeter-diameter water-filled capillary tubes to observe—in the journal Nature in 1973. In 1974, he published a cross-sectional image of a living mouse.

The ultimate goal, however, was to obtain an image of a human body – which required building a machine large enough to hold and scan a human being. In a giant step forward, Damadian built such a machine in his laboratory at Downstate and, on July 3, 1977, succeeded in becoming the first to perform a cross-sectional image of a torso in a human. One of Damadian’s graduate students at Downstate, Larry Minkoff, volunteered to be the first person to be scanned. The machine Damadian devised, which he called “Indomitable,” belongs to the Smithsonian Institution, although it currently is on loan at the National Inventors Hall of Fame in Akron, Ohio.

Damadian’s imaging technique is not used in today’s MRI procedures. However, MRI would not exist today without his key discovery of variation among the relaxation times of nuclei in different environments. In 1997, the United States High Court of Patents upheld Damadian’s 1972 patent. The Court concluded that MRI machines rely on the tissue NMR relaxations that were claimed in the patent as a method for detecting cancer, and that MRI machines use these tissue relaxations to control pixel brightness and supply the image contrasts that detect cancer in patients. This verdict was affirmed by the United States Supreme Court.

Likewise, Lauterbur’s contribution to MRI was essential to its ultimate success. In his obituary (he passed away in 2007), Lauterbur’s colleague at Stony Brook, David Hanson, said, “Paul had the vision and the understanding that these were just proof-of-principle experiments, and they were blazing a trail, and once you got the trail started, it would turn into a superhighway.”

In 1988, Damadian and Lauterbur were awarded the National Medal of Technology by President Ronald Reagan “for their independent contributions in conceiving and developing the application of magnetic resonance technology to medical uses including whole-body scanning and diagnostic imaging.”

In 2003, Lauterbur, along with British physicist Peter Mansfield, won the Nobel Prize for his work on the development of MRI.

Two SUNY researchers, two different ideas, one goal—to create a technology the likes of which had never before been seen or even imagined. Together, Damadian’s and Lauterbur’s ideas and efforts have led to the preservation of millions of human lives, and they will continue to do so for the unforeseeable future.