More Than Just Preventing Crime, The University Police is Part of the Campus Community 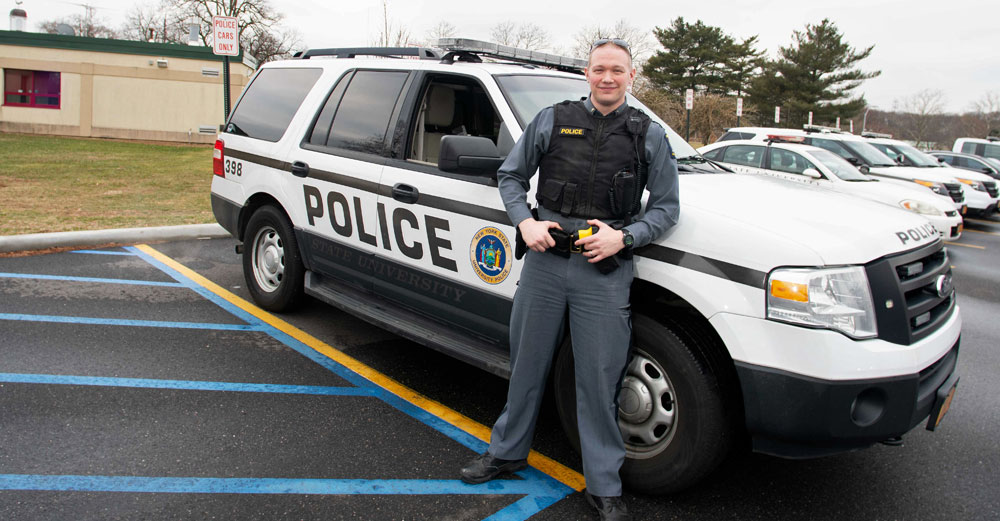 They are genuine police officers, no different than New York state troopers, park police, or forest rangers. The only difference is that University Police’s  beat is a college campus.

Twenty-eight SUNY campuses to be exact.

“The most important thing the SUNY community should know about University Police is that it is our mission to support the educational mission of SUNY System,” said Chief Paul Berger, University Police commissioner. “By partnering with campus communities we hope to create an environment that is free of crime and free of the fear that crime as possible.”

In a time in which campus shootings are familiar to the news cycle, it is comforting to know that University Police are patrolling SUNY campuses. They are fully equipped to handle any situation, from active shooter and bomb threat, to sexual assault, and domestic and workplace violence.

But it was more than a status change. There was also a guiding philosophy behind how University Police would conduct business. They adopted the Peelian Principles, nine ways of doing police work developed by Sir Robert Peel, known as the father of modern policing. Peel established the first professional police force in London in 1829, and University Police follow his time-tested model for community-based law enforcement.

But preventing crime is only a part of what University Police does. They are integrated into the campuses they safeguard a number of ways. For instance, there is often a welcoming police presence at student orientation. There’s the annual “Coffee with a Cop” event, where officers hang out with students, faculty and staff over a cup of java. Personal safety programs such as RAD (rape aggression defense) are taught. “Walk and Talk” is a program that liberates officers from their vehicles, with the intention of mingling with others on campus.

Then there’s Ride-Along, a program that literally puts members of the campus community in the passenger seat of a police vehicle, while officers make the rounds. It is a novel idea that is gaining traction at Farmingdale State College.

“It is a way to get past negative stigmas of law enforcement,” said Daniel Daugherty, interim chief of police at Farmingdale. “It gives the individual an opportunity to see what an officer sees on a day-to-day basis. They will see that it’s not the officer’s goal to ruin everyone’s day, but rather to be helpful and available to respond to the needs of the campus community. They will also get to know that officer as a person and not just a badge.”

Lieutenant Zachary Lee can often be found behind the wheel of a fully-equipped vehicle – this is no watered-down sightseeing tour – hosting a curious member of the campus community on his daily rounds. Fully-equipped means everything from computers and printers (which Lieutenant Lee refers to as a “mobile office”) to firearms and emergency medical kits. Oh, and radar guns and license-plate scanners. In other words, all this and more – which is what you’ll find in a typical New York State police vehicle.

Lieutenant Lee, who started his University Police career at Stony Brook University and has been in law enforcement for a decade, thoroughly enjoys the ride-long. Usually a four-hour excursion, he makes the time go quickly with friendly conversation, and explanations of why University Police do what they do.

“I want to provide a unique perspective to the public, and help address the negative preconceptions about police officers,” he said. “Ride-along participants end up realizing that police officers are human too, and we like to help out where we can.”

At Farmingdale, a commuter school, a ride-along can be particularly enlightening because University Police spend a lot of time enforcing vehicle and traffic law. In other words, they will write you a ticket for any number of offenses.

On one recent ride-along, we witnessed five violations. One involved a student driving with his front license plate on his dashboard; he got a warning. So did a student who told who Lieutenant Lee she was in a hurry to get to the hospital where her grandmother had just been taken. But it isn’t as easy as that, because police have a sixth sense about who’s telling the truth and who isn’t. Lieutenant Lee decided her tears were genuine.

Tickets were issued to two drivers. The first blew a Stop sign, and then to make matters worse, gave Lieutenant Lee an attitude. The second was stopped for exceeding the speed limit. Turned out she was driving her parents’ SUV, which had an expired inspection sticker and a three-month-overdue registration. She got two tickets.

One observant ride-along passenger noticed that Lieutenant Lee touched the trunk of every vehicle he stopped. Turns out there’s an important reason for doing so.

All in all, University Police are there to both protect the campus community, and enhance campus life. They have statewide jurisdiction, but they call their campus home.

Want to know more about University Police? Go to suny.edu/police, where you will learn everything from policing philosophy to requirements for joining the force.