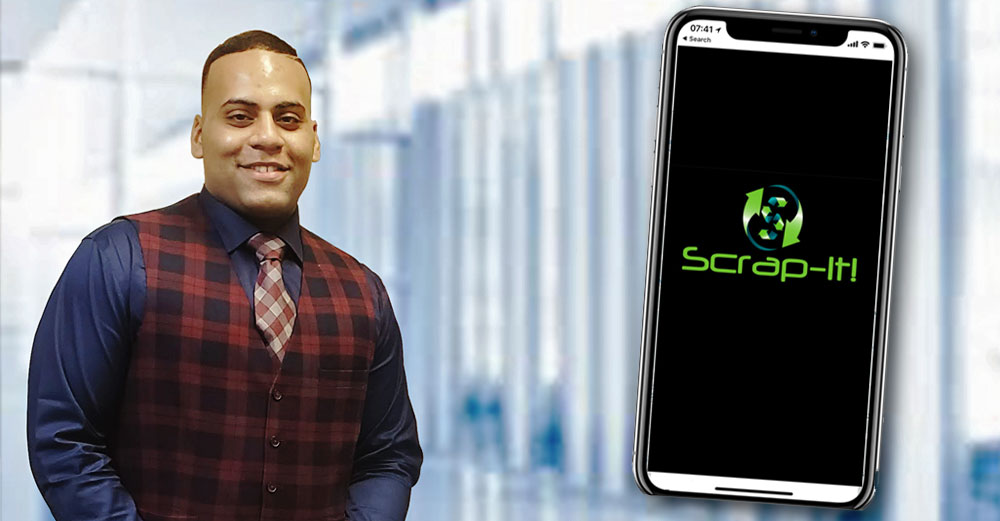 That’s what Orville and Cynthia Davis, seniors at Farmingdale State College, want people to do with the junk – old tools, bottles and cans, clothes, furniture, broken-down appliances, and more – they’ve accumulated in their basements, attics, garages, and storage sheds over the years.

People now have a way to make that job easier with Scrap-It!, a new app Orville, Cynthia, and a trio of Farmingdale State College students developed just for those who are up to their necks in… well, junk! But it’s a little more sophisticated than that, because rather than having your stuff dumped at a landfill, much of it may be taken to various recycling centers, thus making you feel good about your environmental self.

It works this way: download the app, click the Scrap-it! Button, and you’re connected with haulers in your area. Select one, get an estimate, and arrange a pick-up. You’re notified of where your junk has been hauled, and even paid a few bucks for your valuable recyclables. You can even rate your experience with the hauler.

Not a bad idea. In fact, judges at the recently completed New York Business Plan Competition thought it is a brilliant idea, and awarded Orville and company first prize – $10,000 – in the Energy and Environment category. In total, the 2019 Competition included 83 teams from more than 60 schools representing every region of New York State.

It was the fourth time Scrap-It! had won a cash prize in its short lifetime, which in one sense began less than a year ago, but in another had its roots in Orville’s childhood.

Orville’s father owned a junkyard, and, said Orville, he himself was born in one. When his father passed away, Orville didn’t know what to do about the family business and started to drift away. But not for very long. Later, when the idea of hauling junk took digital shape in Orville’s mind, he wrote down the idea – then forgot about it.

It was resurrected last fall, when Dr. Jing Betty Feng, assistant professor of business management at Farmingdale, encouraged Orville to enter the School of Business’s Innovation Challenge, with its broad theme of waste management. Orville was inspired to give Scrap-It! a go. Not only did Team Scrap-It! win the $1,000 first prize, it was validated and energized by the positive feedback for the product by a panel of judges from energy giant, PSEG.

With his confidence sky high, Orville applied for, and was accepted to, e-Fest, a national competition where student entrepreneurs from across the country strut their technological stuff. Team Scrap-It! was selected as one of 25 finalists, but didn’t place among the winners. Still, said Orville, it was an invaluable experience.

“We didn’t win but we took away valuable information and connections. We didn’t cry about our loss, but we observed and learned. We figured out how to win the hearts of the judges and what strategies were effective.”

Orville and company – fellow students Shamika Earle, Jolicoeur Morlan, and Shannon Williams – had to land on their feet because the competitions were coming hot and heavy. At another Farmingdale contest, the team came away with a $500 first prize, and then $2,000 at another. Then, nipping at their heels, was the Long Island regional for the New York State competition, which, as at e-Fest, the team didn’t earn a nickel. But you can’t keep a good app down, and Scrap-It! was chosen to go to the state finals anyway, as a wild card.

“We were so shocked that we didn’t place in the New York regionals,” Orville said, “but we knew once we were selected to go to Albany that we had our foot in the door and we stood a fighting chance.”

“I think these competitions are wonderful,” Cynthia said. “They definitely prepare us for real-life events in the life of an entrepreneur.”

Orville will earn a global business management degree this spring, and then move on to a second degree, in computer programming and information systems. He is a President’s and Dean’s List regular, and an unabashed Farmingdale State College booster; so much so that two years ago he convinced Cynthia to transfer to Farmingdale, where she is finishing up a bioscience BS.

“I have Farmingdale to thank for reigniting my entrepreneurial spirit,” said Orville. “My professors, such as Dr. Feng, have been wonderful in guiding me towards the path of being my own boss and creating opportunities and jobs for others.”

Orville got a particularly inspiring boost from the Entrepreneur and Innovation Club, of which he is vice president. He remembers his first visit to a club meeting.

“I went to a meeting and fell in love with what they promoted. I saw it as a community for students with an entrepreneur’s spirit to come together and share their dreams and aspirations … a space to collaborate and build upon your ideas.  The club saw my enthusiasm and asked that I serve as the vice president.  I took the mantle with pride and pushed full steam ahead. I am so grateful for what the club did for me and I am so proud to spread the word with everyone because I saw firsthand the benefits of the club.”

All in all, Orville knows that without Farmingdale, Scrap-It! might still be an idea written on a scrap of paper. But now, with an interview with Shark Tank under his belt, Orville is looking to the future, with high expectations.

“My aspiration for the future is to be the successful person that many believed I would be, and be a role model to many others, especially at-risk youths. I plan to pursue Scrap-It! in memory of my father’s business.” 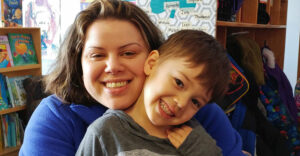 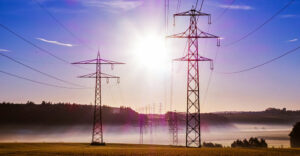