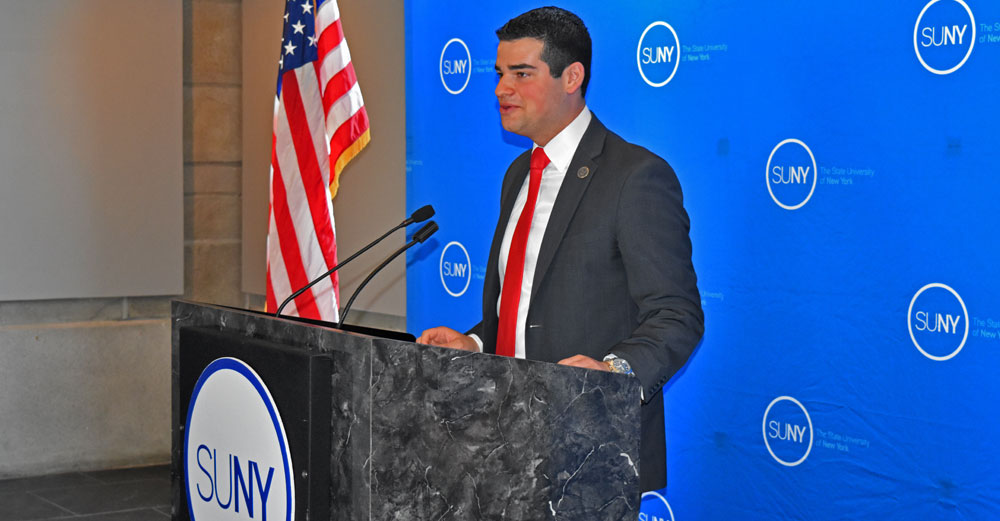 Arthur Ramsay
June 2, 2016
Board of Trustees As commencement season draws to online levitra tablet a close, a long-time advocate for SUNY students had his very own ceremony. Marc Cohen, a rising MPA student at the University at Albany, was installed yesterday afternoon as a Trustee of the State University of New York. Cohen was elected in April by his peers across the SUNY system to serve as President of the SUNY Student Assembly, a role that grants him voting membership on the SUNY Board of Trustees.

Cohen, who recently completed his undergraduate degree in Political Science and Philosophy through the University at Albany’s Honors College, served the Student Assembly as Chief of Staff to President Thomas Mastro for the 2015-16 academic year. As Chief of Staff, Marc oversaw the Assembly’s Executive Cabinet, all internal and external relations portfolios, and aided President Mastro in his role as Trustee. He had previously served as pfizer mexico viagra the Senior Director of External Relations, overseeing the legislative affairs and communications divisions, and as a Representative for undergraduate students at Doctoral Degree-Granting Institutions.

Marc has held countless other roles, both at the University at Albany’s Student Association and in the larger community that is New York State. While an undergraduate, he served the UAlbany Student Association as a Senator, then Director of Legislative Affairs, Chief of Staff, and finally as Vice President.

In attendance at the official swearing in was Lieutenant Governor Kathy Hochul, who spoke briefly drugstore about Marc and the Student Assembly. Turns out, Marc actually cialis online uk was a past intern for Hochul before she reached the rank of Lieutenant Governor. She remarked how “he was only in high school when I first met him as an intern, but Marc Cohen established himself as a leader.”

On the eve of his formal installation as a Trustee, we spoke with Marc and some of his peers in the Student Assembly. “I am honored to have been elected by my peers to represent their interests as President of the Student Assembly and a member of the Board of Trustees,” said Cohen. “I look forward to working with students across the system, Chancellor Zimpher, Chairman McCall, and the entire administration of SUNY to ensure that the student voice remains powerful, respected, and independent.”

Senior administrators at SUNY are among those excited to work with Marc in the coming year. Chairman of the Board, H. Carl McCall, praised Cohen as “a leader amongst our students, dedicating so much of his time to ensuring that their collective priorities are served by our university system.” Chancellor Nancy Zimpher added that Cohen “comes to the SUNY Board as a proven student advocate, having served in a variety of capacities within the Student Assembly as well as other boards and committees throughout UAlbany and the Capital Region.” Chancellor Zimpher and Chairman McCall both expressed their enthusiasm to continue working with Cohen in the coming year on the Board of Trustees.”

While Marc served as Chief of Staff this past year, he helped to lead the Assembly in a triumvirate of sorts with President Mastro and Vice President Melissa Kathan. Mastro said that Cohen will bring to the incoming administration both a strong drive and a “passion for bettering the student experience while bringing to light the issues most relevant to students across the diverse system that is SUNY.” Cohen’s passion was quite visible when he testified with other senior Student Assembly officers in front of the New York Legislature in February. Kathan added that she is “eager to see what President Cohen and his team will deliver” when it comes to representing nearly half a million students across SUNY’s sixty-four campuses. Both Mastro and Kathan will continue their journeys in SUNY, with Mastro entering Binghamton’s Master of Public Administration and Master of Science in Student Affairs Administration MPA-MSAA dual-degree program and Kathan pursuing her J.D. at the University of Buffalo Law School.

Mastro’s predecessor, Lori Mould, saw greatness in Cohen when she appointed him as Senior Director for External Relations two years ago. “Marc has a proven track record for going above and beyond for our SUNY students. He remains steadfast in his commitment to higher education, and his presidency would help solidify the progress which has been made in the past,” said Mould, a graduate student at Empire State College.

Cohen comes into the position leading a new administration, with Vice President Bridget Doyle of Fredonia and Treasurer Patrick Gareau of the University at Albany sitting on the Executive Board for the first time (Secretary Morgan Wood of Broome Community College returned for a second term). Doyle lauded Cohen, adding that the Student Assembly “is truly lucky to have Marc Cohen as our President. He is an exceptional leader who works tirelessly to advocate for student voices.”

Former Director of Legislative Affairs (and fellow University at Albany student) Nicholas Simons also spoke highly of Marc’s ability to lead others. “His work ethic is infectious, yet he also instills a sense of calmness around himself and among his colleagues. Marc has always been one to give a voice to the voiceless, and that is what he will do this year as President of the Student Assembly.” Simons, who will serve under Cohen this year as Chief of Staff for External Relations, continued that, “at the end of the day, when you have an advocate like Marc Cohen in your corner, no fight is too great.”

Board of Trustees, Student Assembly, SUNYSA, University at Albany 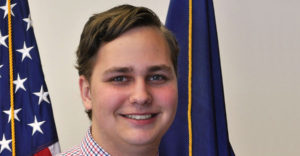 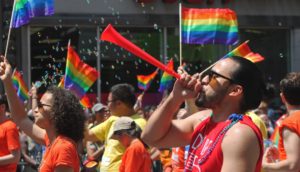 Big Ideas
February 7, 2017February 10, 2017
SUNY and CUNY were founded to provide the opportunity of higher education to all New Yorkers, including those who would...
Big Ideas
March 10, 2016March 10, 2016
The SUNY Board of Trustees is the governing body of the State University. The 18 members carry on many responsibilities...
Kay Broughton
June 10, 2015
A new member of the SUNY Board of Trustees has started his role, as Binghamton University student Thomas Mastro was...
Big Ideas
July 8, 2014July 11, 2014
Chairman of the SUNY Board of Trustees H. Carl McCall has been named recipient of the Reverend James C. Finlay, S.J....
Glenn Solomon
June 12, 2014May 26, 2015
Lori Mould, SUNY Student Assembly President, was sworn in as a State University of New York student member of the Board of...
Olivia Santo
February 21, 2014February 27, 2014
This past year, the Board of Trustees has awarded more degrees in the history of SUNY and continues to leverage...