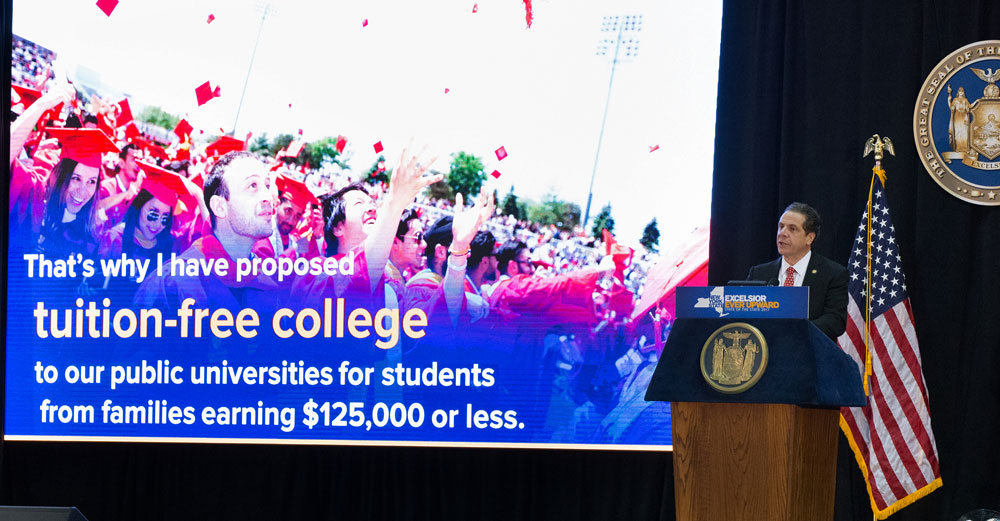 Governor Andrew Cuomo officially started the 2017/2018 budget season with 6 State of the china viagra State addresses, 149 proposals, and a nearly 400-page executive budget proposal. For those of us who haven’t completed our analysis and review, a variety of sources have done the work for us. The Times Union, for example, summarized every major topic area, such as Transportation, Education, Environment, and Health. But here, we will review the Higher Education proposals to explain the parts of the budget that affect college students.

A Little About the Process

The process of formulating a budget for New York State has many steps and involves long hours of discussion and negotiation. The first part involves the Governor and his team. They formulate what is called the “proposed budget.”  This takes place in the days leading up to the January 17 deadline, when the Governor must submit the proposal to cialis levitra sales viagra the Legislature. The figures contained within are not necessarily what New Yorkers will see pass on April 1st, but rather what the Governor wants to see enacted. Between when the Governor releases his proposed budget and March 31st, many participants will meet with legislators in both the Assembly and Senate to provide explanations for their stance on an issue.  Then the legislature debates different aspects of the budget.

The bills that the legislature puts forward are called the budget bills and there are 10 of them that comprise the entire budget. The deadline to have the budget voted on by both houses is April 1st. If the budget isn’t voted on by then, government employees don’t get paid and state programs may be held until a budget is passed by both houses and signed by the Governor. The 10 budget bills that get passed usually look different than the proposed budget that was given out in January. The Governor and the Legislature must compromise and when the budget is passed and signed, it becomes the enacted budget which is the guideline used for the following fiscal year.

A big topic in this year’s budget is Higher Education. Governor Cuomo wants to add $383 million to the Higher Education budget making the total spent nearly 7.5 billion; the highest per student rate ($8,830) in the United States.

The biggest buzz so far has been around the Excelsior Scholarship Program. ­­This scholarship would allow students in families that make less than $125,000 to go state colleges and universities tuition-free. It wouldn’t happen all at once though. It is a 3-year plan with students in families making less than $100,000 to qualify in 2017, less than $110,000 to qualify in 2018, and less than $125,000 in 2019. The scholarship would also work in conjunction with TAP and PEL grants. It requires full-time, 15-credit enrollment, a proven game changer in completion.

According to the Cuomo administration, this would cost $153 million in 2017 and eventually get to $163 million when the program is fully implemented in 2019. But ultimately, the final cost is not yet confirmed.

A big win for SUNY as well as New Yorkers is the five-year $550M Capital Plan for our existing facilities. SUNY owns and operates approximately 40% of all state facilities – more than any other entity. That means our operating costs are quite large and we rely on state help to make sure they are up-to-date. Did you know that 35% of SUNY’s academic facilities are more than 50 years old, and 65% are more than 40 years old? And, 45% of SUNY’s academic facilities were built between 1965 and 1975. The average age of these buildings is now 46 years. That means they need updates to comply with regulations and new standards for safety. The term “critical maintenance” could not ring more true.

The Executive Budget proposal is significant, there is one line item of note that we would like to see back in the plan — Maintenance of Effort — so that our institutions are also able to plan, and to maintain the accomplishments and investments we have made since 2011.

Between the end of January and through March, SUNY officials will be meeting with legislators in both houses to discuss the details of the budget further.

Governor Cuomo continues his commitment to predictability for our students through a five-year tuition plan. This plan is a gateway to long-term affordability, providing our students and their families the ability to plan for the full cost of their education without the risk of unexpected hikes.


A high school diploma just isn’t enough anymore. Less than half of all adults in NY hold a postsecondary degree of some kind, and 70 percent of job here will soon require one. Governor Cuomo has again allocated $18M to our Completion Agenda, through the Performance Investment Fund. This will enable our campuses to keep scaling their best programs – those that support degree completion – throughout the system.

So while we don’t know the exact number that is going to come out of this process, we know Higher Education is a priority for New York State lawmakers and will keep you updated with the most up-to-date numbers.

Support #SUNYCompletes by asking your legislators to keep the Higher Education aspects of the budget the way they are and raise the level of support for community colleges as well as Maintenance of Effort. 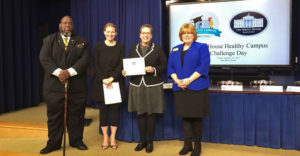 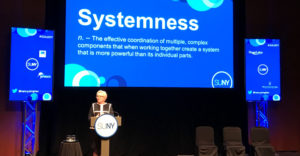