As a blizzards continue to freeze New York’s infrastructure into 2014, researchers from SUNY Oswego and the University at Albany have taken to the shores of Lake Ontario to peer into the innards of the storm to better predict more precisely where snow will fall, and how fast. The effort lays a solid foundation for Governor Cuomo’s proposal to establish a state-of-the-art weather detection system across New York State.

The work, part of a project called OWLeS (Ontario Winter Lake-effect Systems), is critical to advancing the understanding of lake-effect snow (and snowfall in general) so that the public can be more informed, leading to the avoidance of life-threatening stranding like that of which happened in the Southeast United States in February 2014 and Western New York in 2010.

“Lake-effect snow is an ideal laboratory to study what we call boundary layer processes,” says Scott Steiger, associate professor of meteorology at Oswego. His team participates in OWLeS under a $320,000 grant from the National Science Foundation (NSF) — one of three grants, totaling $4 million, that NSF gave to cialis overnight delivery the overall project.

Steiger explains how the phenomena occurs:

The boundary layer is the band of atmosphere affected by the ground or water below. A lake- effect storm is fairly small, and it usually sits in one spot for hours, making it easier to study than phenomena such as tornadoes.

Tools for sampling include a trailer loaded with instruments, from the University of Alabama-Huntsville, Doppler-on-Wheels (DOW) generic viagra uk radar devices from the Center for Severe Weather Research in Boulder, Colo. and, courtesy of the University of Wyoming, a specially-instrumented aircraft called the King Air. The cover image is of a vehicle cialis philippines utilized for the OWLeS project by the University of Utah and was not used for the New York project.

OWLeS was first conceived, if not hatched, ten years ago, when a meteorologist at Hobart and William Smith College invited scientists from nearby cialis online sale campuses to discuss a potential project focused on lake-effect snow. As more schools joined, the initiative became hard to organize and lost its momentum, Steiger says. But then, SUNY Oswego used an $89,000 NSF grant to sample seven lake-effect snowstorms in 2011-12, using one DOW. That paved the way for a fresh collaboration.

One goal of OWLeS is to better understand the influence of topography. That’s a major focus for Justin Minder, assistant professor of atmospheric and environmental science at the University at Albany, whose team deployed four Micro Rain Radar systems, starting at the lake and running onto the Tug Hill Plateau. The radars point straight up, capturing changes in the clouds’ vertical structures as the storm crosses different terrain.

“We often don’t capture very well how topography affects precipitation, because we usually don’t have enough observations on the ground, or high enough resolutions from our computer models,” Minder says.

Understanding those effects could help meteorologists better predict which communities should gird for two feet of snow and which can expect just a few inches. Minder participates in OWLeS with support from a $4,000 seed grant from the University at Albany’s Faculty Research Award Program.

Other equipment used in OWLeS helps researchers distinguish snowflakes in the clouds from small ice pellets, Steiger says. “By doing that, we can better estimate how quickly the snow or ice is going to pile up on the ground.” That’s useful information, for example, when dispatchers are sending out snowplows.

One unusual aspect of OWLeS is the number of undergraduate researchers involved, including 18 from SUNY Oswego, 25 from Millersville University in Pennsylvania and even a few from Brazil, says Steiger.

Jake Mulholland, a senior meteorology major at SUNY Oswego, works on a student team that forecasts the weather each day, to tell field researchers whether a snowstorm is brewing.

“It’s been a humbling experience,” he says. Computer models for forecasting have improved in recent years, but even with the equipment and software in SUNY Oswego’s Richard S. Shineman Center and a commanding view across Lake Ontario, the forecasts still sometimes miss the mark.  That’s one of the things that makes OWLeS so compelling. “Before you can forecast storms, you have to understand their inner workings.” 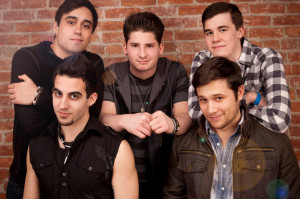 Previous post Meet ‘Somewhere Up There’, Voted Best Band
Next post From the Dominican Republic to SUNY: An alumna inspiring others to excel