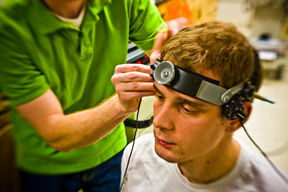 The UB Concussion Clinic helped Brian Krempa get back on his feet after suffering the debilitating effects of multiple concussions.

Syty, ’11, joined the University at Buffalo’s Division I football team in 2007 as a walk-on. Improving after each of his first three seasons, the Clarence, N.Y., native was projected to start at middle linebacker for the Bulls for the 2011 season, his last. But the lingering effects of at least seven known concussions forced Syty to hang up his helmet or risk further damage.

Using an established treadmill protocol, researchers at UB’s Orthopaedics and Sports Medicine Concussion Management Clinic have developed a novel assessment tool for both professional and amateur athletes who, like Syty, suffer from post-concussion syndrome, a condition that can lead to permanent, neurodegenerative brain damage called chronic traumatic encephalopathy (CTE).

It’s the first standardized test developed to help physicians determine whether an athlete is ready to return to play. The hope is that it will also reduce the number of CTE cases in the future.

“There’s no such thing as a minor concussion, and the problem is that once you have one or two, you’re more likely to have a third, fourth or a fifth, and then you are at risk for sustaining cumulative and permanent damage over time,” says John Leddy, associate professor of clinical orthopedics and director of the UB clinic, which has received attention from athletic programs across the country that are eager to use this new method to help their athletes compete successfully—and safely.