Glenn Johnson is the Chief Meteorologist at 13 WHAM-TV in Rochester, NY, and an alumnus of the SUNY College at Brockport.  While at Brockport, Glenn discovered his talent for broadcast meteorology through his major in Earth Science and his minor in Communication, as well as his extracurricular activities. 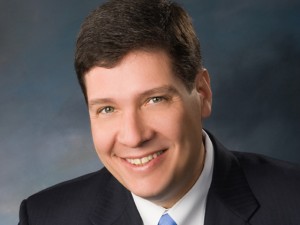 How did your SUNY education help you prepare for life and your career?

For some students, the transition from high school to college can be rather difficult. I know it was for me, considering I was going to a school that was more than 400 miles from home. But Brockport had that family atmosphere, which made the transition for me seamless. As a result, I then was able to quickly excel as a SUNY Brockport student.

Making a career choice in meteorology is not for the faint of heart. Inherently, it has a very limited market for jobs prospects. However, Brockport allowed me to explore the possibilities in the field and ultimately, it was the faculty that shined the light on a hidden talent that I never knew I had. Forecasting the weather is one thing, but communicating it to a large audience is something very different. I was fortunate that I had professors in both the meteorology and communication majors who encouraged me to make this choice. It was in my final semester at Brockport that led to an internship and that connection to the business world provided the opportunity for my position as a television meteorologist.

As I look back after almost more than 27 years since graduation, I realize that some of the most profound changes in my life can be directly attributed to my college career at Brockport. Both personally and professionally, the SUNY college environment set the stage for who I am today.

What was your involvement with clubs/student organizations on campus?

I was involved in many activities and intramural sports during my time at Brockport. That was the joy of living on campus. But there were several organizations that really made a difference for me. First, the meteorology club pushed me to explore the field to a much greater extent. In my final year, I was elected president of the club, which brought a greater sense of responsibility.  Also, my involvement at WBSU radio showed me what was really possible after my time at Brockport.  However, what really broadened my horizon as a student was to be awarded the position of an R.A. or what is better known as a residential assistant. Sure, you can attribute this experience to increased leadership or responsibility, but for me this really proved that I could push myself beyond what I thought were my limits as a person. That was invaluable to me as I went out into the so called working world.

It may sound cliché, but no two days are alike when it comes to broadcast meteorology.  When I’m at 13 WHAM Television, it’s all about deadlines.  Analyzing and researching the weather in order to create a forecast that is then disseminated on television, radar, newspaper, telephone and web sites. The fun part is dealing with the unique weather of Western New York because it is always changing. When I’m not in the studio or the radio booth, it is then the challenge of coordinating and managing the weather office and a staff of meteorologists.  Quite often a fair amount of my time can be spent just as easily outside the studio as it is inside the studio. For example, on a given day, I may also be teaching a weather class at the local community college. As an adjunct instructor, I find working with students very rewarding. Another day may take me to a local elementary school to talk about weather to a science class or I may have a board meeting with a local charity. Currently, I’m on the board of directors for the SUNY Brockport Alumni Association.

My advice is to work hard, challenge yourself beyond what you think you can do, have fun, and enjoy the friendships that you make with fellow students. For many of you, it is a time in your life that can never be duplicated. Take it from me that years later you will look back very fondly at this time of your life. Enjoy!

Remember that what you do today, the choices you make, the effort you put forth will lay the foundation for your future for years to come.