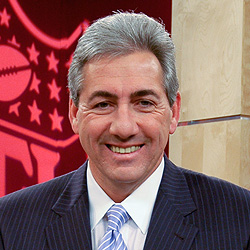 Sal Paolantonio is a broadcaster, author, professor and family man.  He is best known as a reporter for ESPN, focusing mainly on the NFL.  Working out of the Philadelphia, Paolantonio spends the majority of his time covering the Philadelphia Eagles and our hometown NY Giants and NY Jets.  Throughout his 17 years working for the broadcast sports giant, Paolantonio has worked on SportsCenter, NFL Live and Sunday NFL Countdown and has authored best-sellers, including The Paolantonio Report: The Most Overrated and Underrated Players, Teams, Coaches, and Moments in NFL History and How Football Explains America.  In his free time, Paolantonio serves as an adjunct professor at a local university.

1.       SUNY Oneonta was your first experience of college and now, following graduate school and the military (thank you for your service), you find yourself as a professor in Philadelphia.   How did SUNY Oneonta shape your perception of higher education?

SUNY Oneonta was a great place to learn in the mid-70s. It was a laboratory for intellectual curiosity because the professors and students were highly engaged in national and world events – the aftermath of the Vietnam War, Watergate, the fiscal crisis in The City and New York State. These events helped shape our classroom discussions on a daily basis and often provided the catalyst, a jumping off point to learn more – and get involved more. It is why I got involved with the campus newspaper and radio stations, The State Times and WONY.

I wanted my voice to be heard, just like my classmates. I had two professors who pushed me in that direction: Steve Rubin and Paul Italia, both of the English Department. ( I had a minor in English Literature.) It was their example that I wanted to follow when I got the chance to be a professor at St. Joseph’s University, teaching courses in journalism and communications in the English Department from 2002-2006. Once my career in broadcasting is finished, I want to go back to teaching at the college level full-time. It was easily the most rewarding aspect of my varied career.

2.      As an undergraduate History Major, were broadcasting and sports of any interest to you?

I was a sports fan and wrote a weekly sports column for the school newspaper, the State Times. It was an off-beat column, taking a different look at sports, and generated quite a bit of controversy on campus when I wrote a series on whether the school should have shutdown varsity athletics to preserve precious funds for campus-wide intramural sports. I was trying to generate an open debate and get the student senate to come up with some radical solutions to serious budget cutbacks at a time when the state was reeling in SUNY funds.

I also wrote about school student politics, which was my real passion. I had a Friday night show on WONY, the college FM station, a jazz-fusion and interview show. It was my first job in broadcasting. There was no TV station. But the radio show really inspired me to pursue journalism and communication in broader mediums outside print.

3.       On the same note, what clubs or activities did you participate in at SUNY Oneonta?

State Times, WONY, varsity tennis in my freshman year, intramural basketball. For two years, I was also a resident advisor in Hulbert Hall. That’s how I met my wife, Lynn. She was on my corridor. We met in 1976 and have been together ever since. She graduated from SUNY Oneonta in 1978, a year after me. We have three grown daughters: Zoe, an attorney who is married, living in Washington DC; Kyle, a school teacher in Steamboat Springs CO; and, Sarah, a coordinating producer at Sirius/XM radio in Washington DC.

4.      How did your college education help prepare you for life and your career?

Remember, I graduated in three years. I had no money. I went to Oneonta State without a clear vision of what I wanted to do. But the campus was so wide open with opportunity that I left there with an overwhelming sense that the world was this nice big blank canvas and all I had to was start painting my own vision of who I wanted to be, what I wanted to be. The professors there taught me that.

SUNY Oneonta showed me the gap between what I was as a kid from Long Island and what I could become and it showed me how to bridge that gap, to treat every opportunity like a Tibetan flag, like a spiritual adventure. It unleashed my passion to try new things, go new places.

So, I embarked on a life of travel and journalism.  I went into the Navy, and there, as an United States Naval Officer for five years in the Pacific Fleet, I took what I learned as an R.A. at SUNY Oneonta and built on it. And then, out of the Navy, I got my first job as a reporter at the Albany Times Union – and it was off to the races. Before you know it, I have been a paid witness to history, covering two presidential campaigns, Senate campaigns in New Jersey, city mayoral campaigns and city hall in Philadelphia, the famine in Africa, 20 Super Bowls, Wimbledon, the US Open, and many of the long court trials of some of the most celebrated cases in recent American sports history.

During the NFL season, each day is different, but one thing is the same: about 15-16 hours of work: Preparation, reporting, writing, and delivering information about the No. 1 sports business in the world. I love working for ESPN. It’s a great organization filled with fabulous, hard-working talent. And I love reporting on the NFL, because people care about what you care about.

It is a tremendous responsibility that I take very seriously. On Game Day, I get to the stadium by 7 am to report and do live shots on ESPN’s various shows, then cover the game, including post game interviews and more reporting and more live shots. I usually depart about 10PM. There is your 15 hours, not including the travel time. But I love the travel. Interaction with NFL fans makes the games fun, keeps me sharp and involved in what’s happening, city-to-city.

I’ll tell you what I told Oneonta students when I spoke on campus in April 2012. Here is your typical day: sleep is optional, so is breakfast, lunch is necessary and dinner only if someone else is buying! In another words, work at your craft all the time. It’s not enough to aim at the target. You must hit it.