SUNY Music Madness accepted student submissions from all over New York State’s 64 SUNY campuses (for the record, that’s nearly a half-million students). There are biology, political science, psychology, and hundreds of other concentrations that students may study during the day, but then jump back to a core musical talent in the off-hours.

After more than 10,000 votes being cast, a conclusion has been reached…

The winner of the 2013 SUNY Music Madness Competition is Somewhere Up There from SUNY Oneonta! 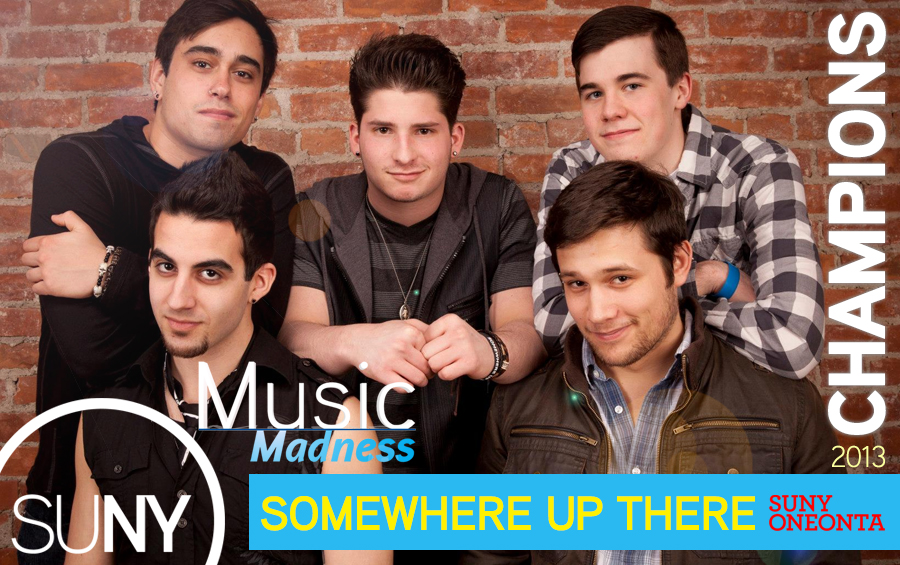 Somewhere Up There is a five-member rock group from SUNY Oneonta.

The band was formed in fall 2011 by SUNY Oneonta students and longtime friends Nick Squillante (vocals, music industry major) and Rob Farella (drums, music industry major), with roommates Nick Juliano (keyboard/synth, physics major) and Joe Frappaolo (guitar, music industry major).  A few months after the band formed, Rob and Joe hosted an open mic night in their residence hall.  There, they met Kyle Sisco (economics major), who joined the band on bass guitar.  The band has released its first EP, “Northern Lights,” and is at work on a full-length album, which will include their single “The End.”

The champions were crowned by a narrow margin: less than 1% of the total overall votes separated Somewhere Up There and their fellow campus band Hello, Seattle at the close of polls.

Hello, Seattle is a five-piece alternative pop rock band made up of SUNY Oneonta students Amy Maxwell (guitar/vocals), Frank Cicciarello (bass), Andrew Platt (drums), Jason Psanis (piano) and lead singer Kimberly Berg. The group started when Berg and Maxwell met in an audio production class back in 2011. Their debut EP, titled “Writing in Reverse,” launched Hello, Seattle onto the music scene in January 2012. Since then, they’ve performed at OH-Fest8, released their first full-length album, “Improper Greeting,” and opened for Timeflies and Mayday Parade at this year’s fall concert.

Analise & EJ Rios are a sister-brother duo who both attend SUNY New Paltz.  Analise (vocals) and EJ (guitar/vocals) study theatre performance when not collaborating on music in their free time.  The two combine a new-age, hometown Bronx beat with popular tracks like Taylor Swift’s “I Knew You Were Trouble” and Billy Joel’s “Vienna”.  And while this competition focused on original music, it’s worth your time to head over to Analise and EJ Rios’ SoundCloud to hear their innovative covers.

These three finalists have extraordinary talent and we are proud to share their love of music with the entire New York community (and beyond!).  Have you explored the ten other contestants who entered the competition also showcase beautiful music?

>> Round I: Listen to every SUNY Music Madness 2013 submission
>> Round II: See who moved on

Champion photo: Jason Sexton Photography via Somewhere Up There on Facebook