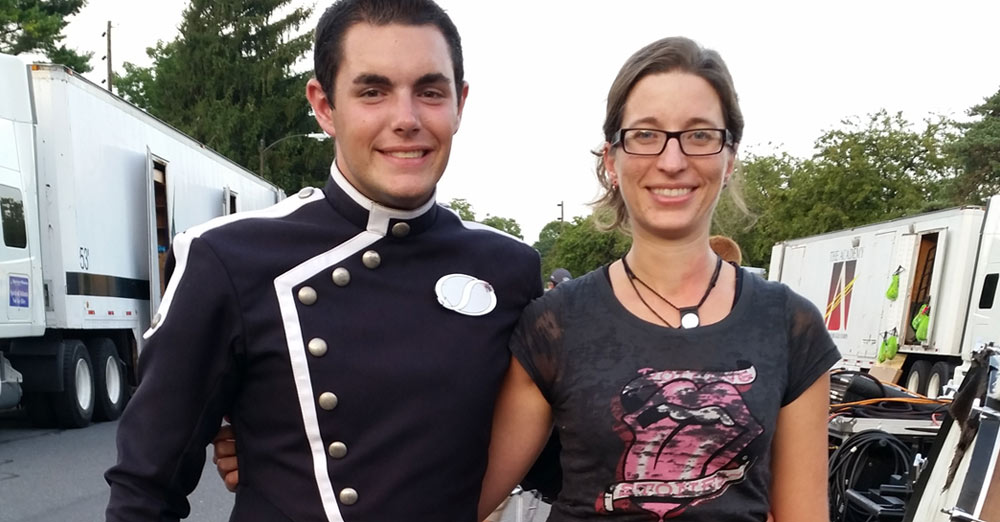 While many college students are spending the summer waiting tables, working as interns or perfecting their tans, SUNY Oneonta junior Michael Morales has been marching to the beat of a different drum.

Morales, a music industry major from Warwick, N.Y., is touring the country as a musician with Drum Corps International (DCI), a competitive league of drum and bugle corps marching ensembles that presents high-energy, choreographed musical performances at venues ranging from high school football fields to NFL stadiums. As many as 20 ensembles perform at each show, and each drum corps is judged and scored.

After a successful audition last November, Morales traveled to monthly rehearsals and made it through three more auditions to land a contract with the Camden County, N.J.-based Jersey Surf Drum Corps. The 150-member ensemble, part of the World Class DCI division, includes a variety of percussion and brass instruments, but no woodwinds. Morales is a percussionist in the front ensemble, playing a rack full of percussion instruments, including cymbals, chimes, a bass drum, a gong, shakers and triangles.

“I’ve been playing drums since I could hold a pair of sticks, and this is the biggest accomplishment of my career,” said Morales, a third-generation drummer whose parents met in drum corps.

Following spring training, Morales began a six-week tour through the Midwest, South and Northeast. The tour culminates in the 2014 DCI World Championships in Indianapolis this weekend. Morales will compete on Friday in the preliminary round of the competition.

The Jersey Surf Drum Corps’ theme is “Pay it Forward,” and pieces on the set list this season have included “Lean on Me,” Aaron Copland’s “Simple Gifts” and the Norah Jones version of “I Think It’s Gonna Rain Today.”

A typical day starts at 7 a.m., with arrival at a new venue, set-up and rehearsals, and ends at midnight, when the show is over and the equipment has been broken down. Then it’s back on the bus and on the road to the next gig. The musicians are accompanied by a staff of about 50 technicians, drivers, cooks, administrators and medical professionals.

SUNY Oneonta Assistant Professor of Music Julie Licata traveled to Allentown, Pa., last weekend to catch one of Morales’ shows. “I’m very proud of Mike’s success this summer and it was really exciting to see him perform,” she said.

Over the course of the tour, Morales said he has made close friends, had the opportunity to network with other musicians, and grown as both a musician and a person. “I feel like it’s taught me a lot about life, traveling and learning to work with other people.”

At SUNY Oneonta, Morales is a member of the Percussion Ensemble and Drag ‘N Rolls Drum Line, and he serves as performing arts chair of the Student Association Activities Council.