Fighting His Way to the Top, Halfway Across the World 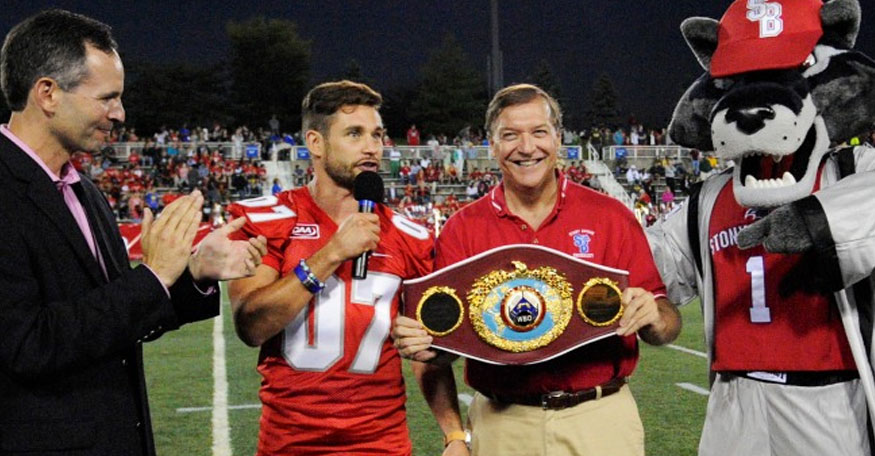 Whether it was a black eye, a busted lip or a swollen face – it didn’t matter. Chris Algieri didn’t want his Stony Brook professors to get the wrong idea, so he had to be up front about his occupation and tell them.

“I said, ‘Just so you guys know, I’m a professional fighter and I may or may not have black eyes at some point during the semester,” Algieri ’07 said, recalling those introductory chats he’d have with each of his instructors after the first day of class. “They’d respond, ‘Ohhh. Yes, that’s fine.’ And then some of them would say, ‘Why do you do that?’

“I just didn’t want them to think I was a street brawler or a drunk,” he added, speaking after a workout and sparring session at the Bellmore Kickboxing Academy.

While in college, the Huntington native quickly climbed the ranks as a professional kick boxer, going undefeated and winning two world titles before graduating from Stony Brook with a bachelor’s degree in health care science. Algieri switched to boxing in 2008 – and still hasn’t lost a professional bout.

In June, Algieri, 30, earned the WBO junior welterweight title, defeating Ruslan Provodnikov, a powerful Russian nicknamed “The Siberian Rocky,” at the Barclays Center in Brooklyn. The fight, headlined on HBO’s “Boxing After Dark,” catapulted Algieri into a November 22 match against Manny Pacquiao in Macau, China, for Pacquiao’s WBO welterweight title.

Fresh off a whirlwind promotional tour that included stops in Macau, Shanghai, San Francisco, Los Angeles and Las Vegas, Algieri returned to his alma mater Sept. 27 for Stony Brook’s homecoming football game and Wolfstock Festival, where he was recognized by the Stony Brook University Alumni Association as the Alumnus Fan of the Game.

“It was my first time back to campus since graduating,” said Algieri, who commuted daily to campus, either driving or riding the Long Island Rail Road. “There was a little bit of a tingle – a surreal kind of feeling.”

Algieri met with other alumni during pregame festivities, and prior to kickoff was presented an official Seawolves football jersey from President Samuel L. Stanley Jr., M.D., and a game ball from Athletic Director Shawn Heilbron during an on-field presentation.

At halftime, Algieri returned to midfield to present a replica of his championship belt to Dr. Stanley. He also announced his intentions to establish the “Chris Algieri Championship Lifestyle Scholarship” at Stony Brook.

“I had a partial academic scholarship at Stony Brook, and it helped me tremendously,” he said. “I paid my own school bills and I took out a lot of loans. For me to be able to do something to help a student financially get through college would be very special.”

Emotions at homecoming ran high the entire day for Algieri, who attended the event with his parents, brother, grandmother, nephews and other family and friends.

“The drive to the campus was what really hit me – going down the streets I took to get to school. It really brought me back,” said Algieri, who graduated with honors from Stony Brook. “As a commuter – other than my freshman year when I took the LIRR to campus – I drove every day to Stony Brook.”

Algieri remembers needing to take the 6:39 a.m. train from Huntington in order to make his early-morning biology classes.

“Those were tough commutes, especially when it was cold and snowing,” he said. “I always wanted to live on campus, but I had to be home to train.”

Aside from his time in the classroom, what kept Algieri on campus during his school years were the study groups.

“I remember having a lot of fun with my classmates in study groups,” he said. “I spent a lot more time in those group study sessions than I did just hanging out on campus.”

Despite his success in the ring as a world-champion kickboxer during school, Algieri attended class in relative obscurity. “I was a two-time world champion, undefeated, fought everybody from all over the world in every weight class around – and no one on campus knew who I was,” he said. “No one in the country knew who I was.”

Battling His Way to Future Success

It is perhaps a bit ironic that Algieri – who also holds a master’s degree in clinical nutrition from New York Tech and plans to some day attend medical school – is mastering a sport where success depends on hurting your opponent.

“The academics in school weren’t really too fond of the boxing, to tell you the truth,” said Algieri, who used the purse from his last fight to finish paying off his student loans. “They thought fighting was silly and that I was going to hurt my brain.

The proud Stony Brook alum said “nothing has ever given me the same spark or passion like fighting.”

In the meantime, Algieri said he is working hard to make the most of his time as a boxing champion.

“Being a professional athlete is not just about the training. There are a lot of other things involved. Especially if you’re a boxer. A boxer isn’t a businessman. He is a business,” Algieri said. “I’m building my brand through sponsorships, social media, my website and interviews with the news media.

“There’s a small window for an athlete to make extra money. And any money I can make outside of getting punched in the face is a good thing,” he said.

Algieri is set to receive a seven-figure payout for his bout with Pacquiao, 35, the Filipino boxing legend who has won 10 world titles in eight different divisions. Pacquiao is one of the two most renowned names in boxing – the other being Floyd Mayweather, the WBC and WBA welterweight champion.

While Algieri fondly recalls how he and his opponent got along during their 11-day press tour to promote their fight (the highlight being the opportunity to throw out the ceremonial first pitch at a San Francisco Giants game), the Stony Brook alum said “the nastiness” for Pacquiao is there.

“I don’t have to hate him. But training camp is all about focusing on the task at hand, which is to destroy that man,” Algieri said. “He’s standing in the way of what I want. I don’t have to dislike him. What I want is past him. I got to go through him. It’s the only way to think about it.”