Building a Virtual Reality Footprint In The Capital Region 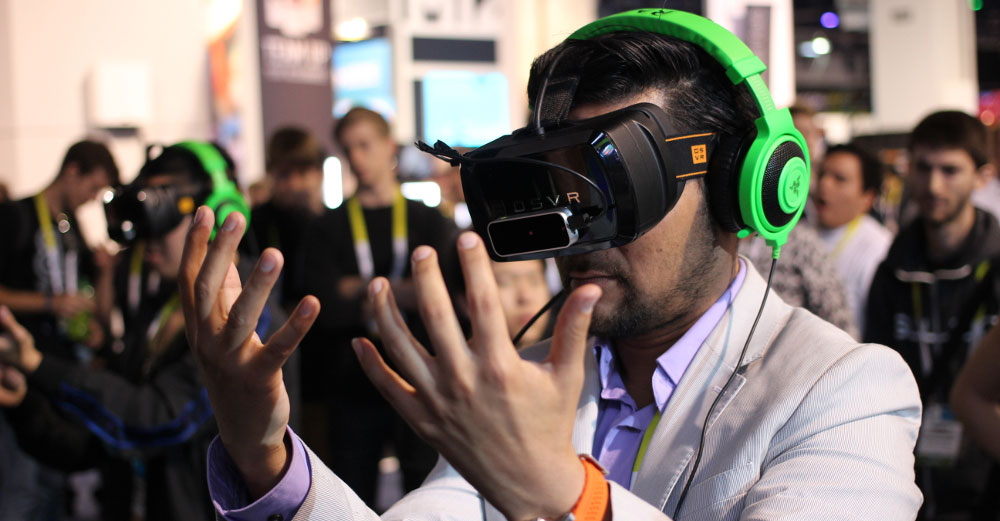 After years as a successful entrepreneur, Ricky P. Thibodeau knows exactly what students need to make an internship worthwhile.

“We’re always looking for companies in the early stages of development,” says Thibodeau, chair of the Accounting, Entrepreneurship, and Marketing Department at Hudson Valley Community College (HVCC). “We like start-ups because they give our entrepreneurship students a chance to do everything: Accounting. Finance. Operations. Marketing. Sales. Branding. Web development. We want small, innovative companies where they can roll up their sleeves, get to work, and come out with new skills. We found that with SpaceoutVR.” 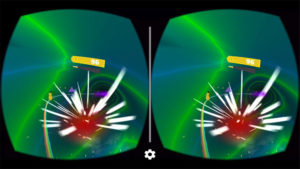 A view of a SpaceoutVR game screen.

Launched in 2015 by Dennis Adamo and V. Owen Bush, SpaceoutVR, Inc. dreams of being the next Very, Very Big Thing in the world of Virtual Reality (VR). Last November, the company released its first product, which transforms music on users’ smartphones into an immersive audiovisual experience. When 3,000 people downloaded the app in the first two weeks, the industry started taking notice. Then in April, SpaceoutVR followed with a videogame called HEADBANGERZ, which takes players on a virtual rollercoaster ride, racking up “beatcoinz” by moving in time with images on their headsets. The company acquired over 60,000 users.

Now SpaceoutVR is focusing on its next goal: unveiling a new entertainment/communications platform, raising enough money to transition into full production, and reaching half a million users before the end of the year.

“For a company that’s just starting up, we’re gaining an enormous footprint,” says CEO Bush, who has a history of successful collaborations with Canon, Dubspot, Eyebeam, Flavorpill, Google, Paramount Pictures, Pitchfork, Twitter, and Wired. “At this point, virtual reality is still in its nascent stages. A lot of people are trying different things, but no one has yet discovered the first killer app for VR, the one that’s going to keep people coming back over and over and over again. That’s our focus. By 2020, augmented and virtual reality is projected to be a $150 billion dollar a year industry, creating tens of thousands of jobs. We want to see the Capital Region becoming one of the new economic powerhouses in America. Our area is well-positioned to become the center of VR, training highly qualified graduates with the perfect skills for this new industry.”

At SpaceoutVR’s Troy office, interns from HVCC have been leading the company’s outreach efforts, spreading the word through digital marketing, blogs, social media, web communications, and hands-on tech demos from Albany to New York City. With help from the START-UP NY program, emerging tech companies, colleges, and communities have the chance to build a win-win-win situation. SpaceoutVR gets to operate tax-free for 10 years in a campus-based START-UP zone, complete with access to students, faculty, and state-of-the-art SUNY resources. HVCC students gain internship opportunities they couldn’t find anywhere else, transferring textbook lessons to the challenges of an industry that’s moving into the future at warp speed. And if Bush and Thibodeau are right, the company’s success could lead to the creation of thousands of high-tech jobs in Troy.

“The college’s partnership with SpaceoutVR benefits not only the company but the students of Hudson Valley Community College as well,” says HVCC President Drew Matonak. “Six students from the college’s Entrepreneurship degree program have already completed internships at the company and all received excellent evaluations. But we hope that this is just the beginning of the partnership. The owners will be taking more interns each semester, and besides business and entrepreneurship students, they will be providing opportunities for computer science and fine arts students. Downtown Troy is becoming a hub for cutting edge digital companies and, through START-UP NY, we are proud to help make that a reality.”

“Our entrepreneurship students have taken Principles of Marketing, they’ve taken Entrepreneurial Strategies,” says Thibodeau. “Now they get to put those skills to work and learn how to apply those lessons to the real world. If they’re going to start their own business, they have to know just what’s involved from the ground up. Creating a start-up isn’t a nine-to-five, 40-hour week job. It’s seven days, 60 hours a week. Easy. That’s what they see at SpaceoutVR, watching Owen and Dennis at work, which is what teaches them, too. That’s the mindset you need to succeed, because when you’re running your own company, the buck stops with you.”