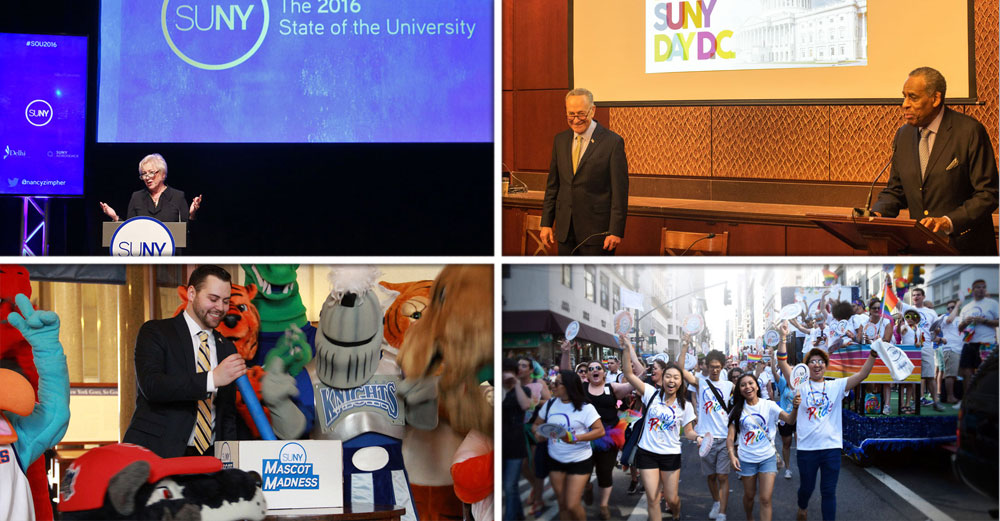 We’re getting ready to flip the calendar to a new year. But before we do, we wanted to take a walk down memory lane to remember the interesting moments and events that appeared here on the Big Ideas blog and took place throughout SUNY during the past year.

2016 was a year of new challenges, accomplishments, and community service that SUNY values so dearly. We saw great examples of spirit on our campuses, high national rankings for many of our colleges and universities, new leadership positions filled at our campuses, as well as students and faculty forming advocacy and support of social causes across New York. These things all impact the SUNY experience for our hundreds of thousands of students, faculty, staff, and alumni.

With all that there is to remember, let’s head down memory lane and take a look at a small number of notable moments from 2016: The beginning of every year at SUNY starts with the State of the University Address given by Chancellor Zimpher. In her 2016 speech, she emphasized the success of “systemness”- a term she coined several years ago. She highlighted partnerships, shared vision, and the completion goals of SUNY as a whole. Other notable speakers joined Chancellor Zimpher to speak to the crowd of attendees, including Lieutenant Governor Hochul, SUNY Board of Trustees chairman Carl McCall, and then-Student Assembly President Thomas Mastro.

January also saw the release of the U.S News and World Report Rankings for Best Online Programs of which 9 SUNY schools were on the list. Five campuses made the cut for best Bachelor’s degrees! There were also many graduate degree programs that received recognition, furthering the value of a SUNY degree.

February saw the release of the Princeton Review rankings in which many SUNY schools were featured. Among them were Maritime placing #7 for Best Career Placement as well as #21 in Top Internship Opportunities, Purchase ranking #12 Best College Theater, while Environmental Science and Forestry was listed #20 for Best College Dorms. Many other colleges were ranked for other categories including academic programs, green colleges, and colleges that pay you back.

The first-ever dedicated Center for Applied Learning at SUNY was opened at SUNY Potsdam. Supporting the SUNY initiative to make applied learning experiences available to every student, the center sets out to ensure that every student has the opportunity to complete one or more high-impact learning experiences before they reach Commencement. It is a great example for other campuses to replicate.

February also had 29 days this year, making 2016 a leap year! A whole extra day for learning and exploring. Our Mascot Madness competition runs alongside the March Madness college basketball tournament, and this year our teams rose higher than anyone could have imagined. Four teams went to the NCAA tournament this year: The University at Buffalo men’s and women’s team, the Stony Brook University men’s team, who won their first ever America East Conference championship, and the women’s team from the University at Albany. The women’s team from UAlbany won the America East competition for the fifth year in a row, the first team in America East history to ever accomplish that goal, along with winning their first ever NCAA tournament game when they defeated the 5th-ranked Florida Gators. Whether it was Mascot Madness or March Madness, March was a month full of competition and SUNY pride.

Also in March, SUNY Maritime alum Scott Kelly returned to Earth after his year-long stay in space on the ISS. From the beginning, we followed along as he chronicled his journey on social media. All at SUNY were happy to see him return safe and sound with data that will be studied to see if man can perhaps one day make it to Mars! Chancellor Zimpher made a powerful statement with her support of Community Colleges focusing on getting students ready for the workforce. This statement was in conjunction with Vice President Biden and his wife, Jill, supporting the work our community colleges do and pushing for more skill training.

And another successful “SUNY Day DC” happened in April, in which Chancellor Zimpher, Chairman McCall, and student leaders all went to our nations capital to inform the federal government of SUNY’s top priorities. It was a successful day that showed the power of SUNY to our nation’s leaders, which included Senator Gillibrand and Senator Schumer. Both current and past students shared their experiences at SUNY and showcased all SUNY has to offer. May is commencement season for all the colleges and universities across the country. This year, commencement season at SUNY got us to 96,000 degrees granted by SUNY institutions. Every one of our 64 campuses recognized grads this year making it on of the busiest seasons ever! From the cap and gown to the completion of that last 20 page paper, May is a time of completion for many of our students as they move forward and join the network of 3 million alumni making a difference in New York as well as the nation as a whole.

In addition to commencement, Chancellor Zimpher and New York State Education Commissioner MaryEllen Elia launched TeachNY, a new movement in New York State to promote and ensure quality educators for all students. The duo kicked off a campaign in which they traveled all around New York to hear from teachers and education professionals with the goal of uplifting the teaching profession and ensuring the state, and nation, that we have the high quality educators needed for the future.

The last day of May was a sad one, as we received A letter to the SUNY Family in which Chancellor Zimpher announced that June 30th, 2017 would be her last day as Chancellor of The State University of New York. Chancellor Zimpher’s leadership and guidance propelled SUNY into the 21st century and elevated the system to levels we could never have imagined. As we count down the last days, we thank her for her vision and guidance in many ways as we prepare to say goodbye to one of the best chancellors in higher education. June brought us a milestone event in SUNY’s diversity and equality efforts when the system brought hundreds of participants to the NYC Pride March for the first time ever. We were proud to show our #SUNYPride with the commitment to inclusion for all and support for members of the LGBTQ+ community. Months of planning ended with success as the SUNY message of access and inclusion for all was shown in front of millions of spectators on a bright sunny day.

June also saw the swearing in of new Student Assembly president Marc Cohen. President Cohen serves as a voting member of the Board of Trustees as the student voice. In attendance at his swearing in was Chancellor Zimpher, Lieutenant Governor Hochul, as well as members of the UAlbany faculty where he is a graduate student pursuing his MPA. We wish him continued success in leading the 600,000 students in the SUNY System.

There’s plenty more to highlight from 2016. Look for the Year In Review Part 2 to see our accomplishments for the second half of the year! 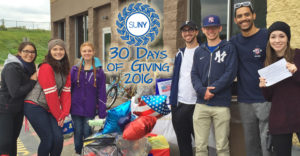 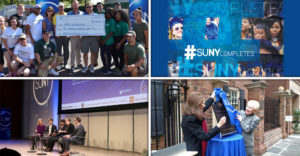