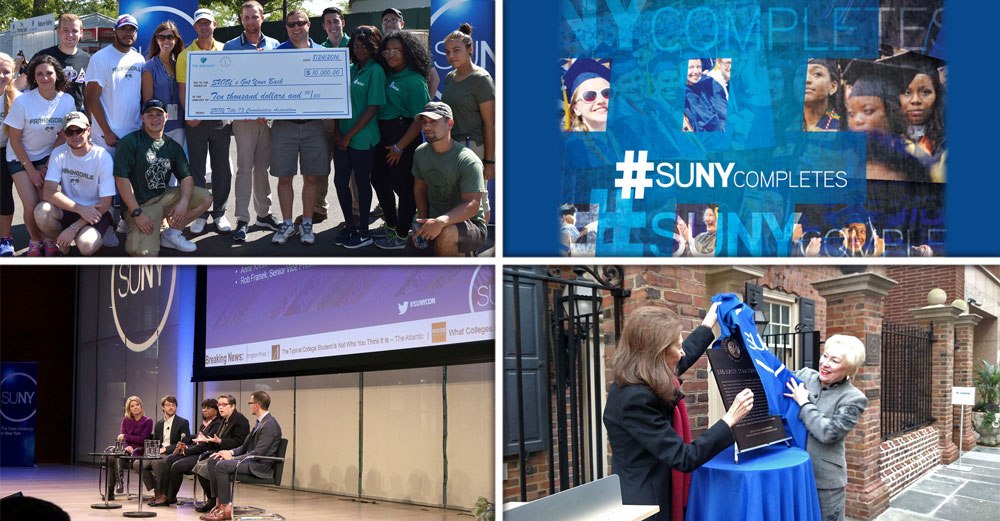 Seeing as there was so much activity in the first half of the year, it seemed most appropriate to make two posts commemorating all the changes and advancements SUNY has made in 2016. The good news simply can’t fit in one blog entry!

Here’s some notable happenings and accomplishments for the second half of 2016:

The  Forbes’ list of top colleges article came out. Among the SUNY campuses that made the list are Binghamton, Geneseo, Buffalo, Stony Brook, ESF, Albany, New Paltz, Oneonta, and Farmingdale. All of these campuses offered great programs, resources for students, and finding success post-graduation.

In part one of the Year in Review, we learned that Chancellor Zimpher would be stepping down from her post in June 2017. The effort to replace her outstanding leadership will indeed be a long, arduous process. That process officially kicked off in July as Chairman McCall launched an international search to find the next Chancellor of SUNY. The search committee is comprised of members of the SUNY Board of Trustees, SUNY Presidents, and prominent alumni and stakeholders with connections to SUNY. August brought the start of the 2016 Fall semester and more recognition of SUNY’s value and performance. The Princeton Review rankings were published and placed six SUNY schools onto the the list of the best 381 colleges in America. In addition to high overall performance, schools were recognized in lists for Best Northeastern schools, Green Colleges, Colleges That Pay You Back, Most Engaged in Community Service, and Best College Dorms.

August also saw the SUNY’s Got Your Back campaign reach new levels of success at the PGA TOUR Playoffs. This campaign is a system-wide effort to show survivors of domestic violence that we support them and they have a caring community within SUNY. The goal was to fill 2,016 comfort bags with toiletries, stuffed animals, and notes of encouragement through 2016 at our SUNY campuses. It was in August that the campaign obtained corporate partnership from the PGA TOUR, PGA TOUR Wives Association, and The Barclays at the first stop of the PGA Playoffs in Farmingdale, NY. More than 3,000 bags alone were filled on this one day by many volunteers.

To close out the month, SUNY was back at the Great New York State Fair for the 6th year in a row. Regional campuses made their presence known to more than one million visitors with exhibits and tents throughout the fair. And SUNY Day was held on September 1 where Chancellor Zimpher made her way through the fair speaking with attendees and local media about all the good things going on at and around SUNY. SUNY’s efforts to raise the number of degrees granted to 150,000 per year is an initiative that takes hard work and commitment. The first step to reaching this goal came in September when it was announced that 3,000 additional degrees were awarded during the spring commencement season. New examples of campus success were introduced in September in the #SUNYCompletes campaign to make the efforts known throughout New York.

The release of the U.S. News & World Report college rankings, of which our campuses ranked in many categories, came in September. Five SUNY campuses were among the list of best national universities. In addition to the national list, SUNY Geneseo ranked #1 for undergraduate teaching degrees in the North regional universities category and Alfred State ranked #6 for best colleges for Veterans in the regional north category.

The resolution to Move the Box on SUNY applications was passed by the SUNY Student Assembly. This was in conjunction with the opinions of Chancellor Zimpher as well as other SUNY leadership. The goal of this initiative was to remove the question about criminal convictions to after the application process. Schools can ask about criminal backgrounds for campus housing, study abroad, and other campus facilities, but not for the purpose of acceptance to the university.

We also saw the Student Assembly coordinating with campuses to Get Out The Vote. There were several different ways our campuses were helping our students perform their civic duty by teaching them how to register to vote, actually registering them right on campus, and informing the community of the importance of voting. Many campuses held registration drives as well as taught students how to request an absentee ballot! At SUNY, we want our students to be educated participants in their communities. The 6th annual Critical Issues in Higher Education conference, or SUNYCON, took place at the TimesCenter in New York City.  SUNYCON 2016 focused on the media and how it influences our perception of higher education. Keynote Speakers included Judy Smith, the real-life Olivia Pope; Marc Morial, President & CEO of National Urban League; and Terry Gross, Host of NPR’s Fresh Air. SUNYCON 2016 included a Student Fellows program in which select students from different campuses were able to attend SUNYCON cost free as well as have individual session with Chancellor Zimpher and the panelists. A look back at SUNYCON details the incredible experience through the eyes of a Student Fellow.

October is Domestic Violence Awareness Month and SUNY led many different initiatives to show survivors there is a safe place for them in their communities. Along with the SUNY’s Got Your Back Campign, SUNY Plaza was shining purple, and many campuses held walks as well as training on how to get out of a violent relationship. Many campuses now require student leaders to attend bystander training in order to educate students on the best ways to help a friend or stranger get out of a situation in the safest ways possible. This is paired with the Just Ask campaign as well as the It’s On Us campaign.

October was busy for SUNY all around! The third initiative that was a focal point during the month was TeachNY and how it was gathering momentum. As the state-wide listening tour conducted by Chancellor Zimpher and NYSED Commisioner Elia neared its conclusion, we were able to see the many examples of public support for the work being done and the success of the events. These voices of support can be found online for you to learn more! November also saw the completion of one of our year-long initiatives when we filled 10,000 bags for SUNY’s Got Your Back. The initial goal of 2,016 comfort bags was far surpassed and the goal was increased to 10,000 bags. That total was reached and passed with a total of 10,019 bags filled! The SUNY SA filled the 10,000th bag at their fall conference in November. We are so proud of our students, campuses, and corporate sponsors for making this goal a reality and showing the New York community that we stand with survivors. As the year comes to its conclusion, our final act of 2016 is 30 Days of Giving. For the 30 days following Thanksgiving, we highlight one campus or student that has made real change in their community in 2016 through volunteerism, charity, and other acts of kindness. All 30 days are linked to the post above so you can see how our campuses have made a difference throughout the year.

Finally, the SUNY Global Center in New York City was given a Landmarks of New York designation presented by the New York Landmarks Preservation Foundation. Home of SUNY System Administration’s only satellite office outside of Albany, the Global Center is also used as an event center that hosts a variety of events, including educational & non-profit functions as well as corporate and private events. The designation firmly includes the building as part of New York City’s history.

We are looking forward to all the change, challenge, and triumph 2017 is going to bring. From a new chancellor to new campus presidents and degree programs, make sure to stay tuned to see what SUNY is bringing to the table. Until then, Happy New Year!

Got Your Back, Rock the Vote, SUNY Smart Track, SUNYCON, TeachNY 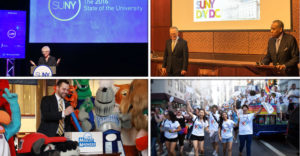 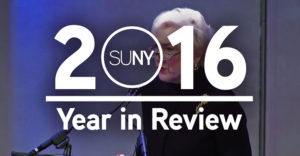