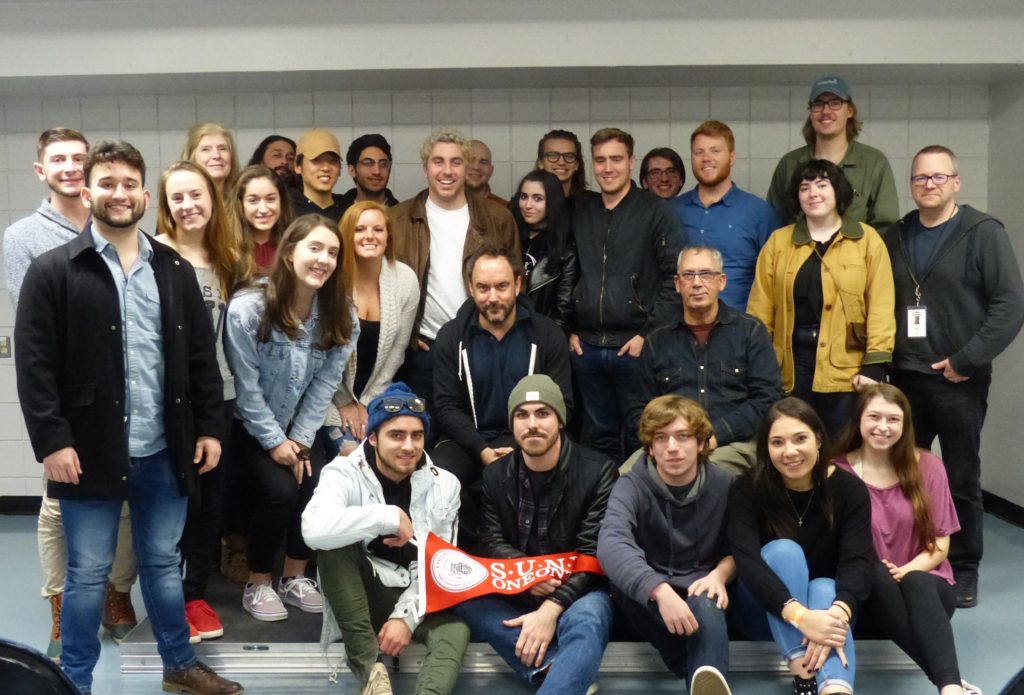 It’s not often you get the chance to go behind the scenes with one of the biggest names in entertainment. But recently, twenty-three SUNY Oneonta music industry students and two faculty members got a behind-the-scenes tour of a Dave Matthews Band concert on Dec. 5 at the Albany Times Union Center-– including a surprise Q&A with Matthews himself.

The trip came about through a connection with SUNY Oneonta grad Rit Venerus, the band’s business manager. Venerus is founder and president of Cal Financial Group, a business management firm that serves entertainers in music, film and television, as well as professional athletes.

Music Professor Janet Nepkie, who accompanied the students on the tour, remembers Venerus from her Legal Issues in the Music Industry class. Nancy Tarr, music industry lecturer and fellow Oneonta alum, works with Venerus on a music industry internship nonprofit partially funded by the Bonnaroo Works Fund. The two discovered their SUNY Oneonta connections after Tarr’s appointment as executive director of the Well Dunn Foundation, a San Francisco-based organization that helps students across the country land and prepare for internships at top music entertainment industry companies.

The group spent four hours touring the venue and meeting with staff involved in various aspects of the production, including the DMB tour director, head of security and the production manager, who shared his experiences working with bands such as Queen and Michael Jackson. Most of the employees had been with the band more than 20 years.

The students also learned about lighting design and the process of running lights and hanging projectors for video production. The front-of-house sound operator discussed setting up stage monitors, hanging speakers and how to provide the best sound for the audience.

Several of the students are longtime fans of the band, so it was an extra-special surprise when Dave Matthews walked into the room. Before posing for a group picture, the Grammy Award-winning artist pulled up a chair and answered questions ranging from why he has always allowed “tapers” to record and share his live music, to how he maintains his creative spark.

“Meeting such a successful Oneonta alum was truly inspiring,” said senior David Ormiston. It showed that with hard work and dedication it’s possible to achieve my dreams. “Meeting Dave Matthews was a dream in its own right. He’s been a hero of mine since I was young.”

The entire group got pit wristbands and watched the concert a few rows from the stage. The 2+-hour show included four songs from the band’s most recent album, which was released in June and made DMB the first group in history to have seven consecutive albums debut at No. 1 on the Billboard 200.

“Seeing the performance live and up close really brought everything we learned in the classroom full circle,” said junior Natalie Costanza. “I was able to see things like the light and audio production firsthand. It was also valuable to see the stage set up and how stage design truly can encompass a performance. It was also cool to be up so close to the stage because you could really see the performers PERFORM. You could see their expressions and how they communicated with each other, which was awesome.”

“What a thrill to be a part of such a wonderful educational experience for music industry students,” said Tarr. “I am grateful to Rit Venurus and the staff of the Dave Matthews Band for sharing career advice and providing an insider’s view to touring, production and stage design.”

See more photos of the entire experience at oneonta.edu.