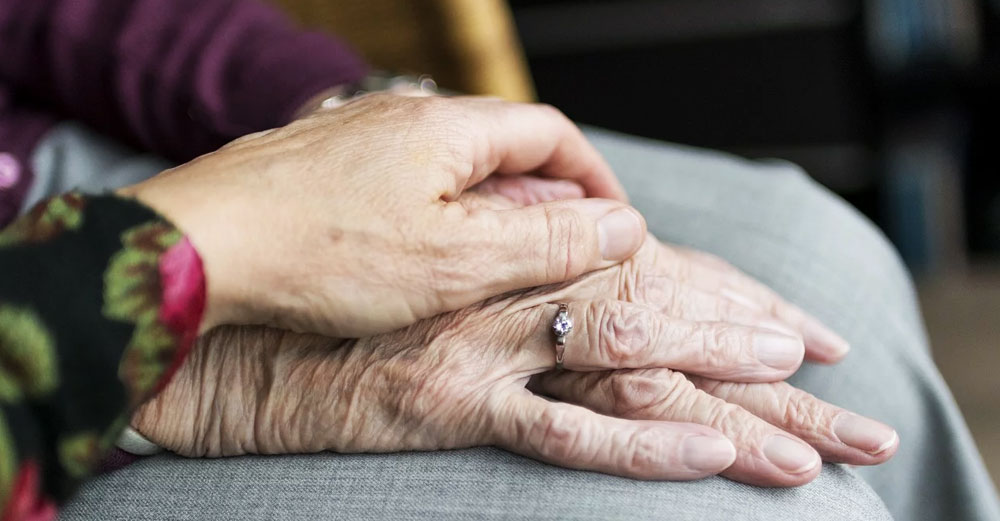 There is currently no known cure for Alzheimer’s disease (AD), the most common form of dementia. This malady causes sufferers to endure increasingly debilitating cognitive and behavioral problems, eventually reaching the stage where patients can no longer recognize familiar faces or accomplish simple daily tasks. AD is the sixth leading cause of death in the United States, killing more people annually than prostate and breast cancer combined.

SUNY researchers on multiple campuses are working on approaches that attack not just the symptoms, but the causes of this disease. Collectively, they are making a difference and developing a better future for AD patients.

Alzheimer’s disease starts developing when toxic protein fragments called beta amyloids form into chains known as fibrils, which build upon and kill brain cells. A research team including faculty at Binghamton University and University of Colorado Denver are the first to map the molecular structure of this aggressive protein aggregate.

“Approximately 10 percent of Alzheimer’s cases result from familial mutations,” says Wei Qiang, assistant professor of biophysical chemistry at Binghamton and one of the team leaders. “The other 90 percent cases are caused by misfolded wild-type amyloid proteins. We need to understand the molecular basis of the disease pathology. In doing so, we might one day create drugs that prevent the degenerative effects of the disease.”

At SUNY Polytechnic Institute, Associate Professor of Nanobioscience Dr. Janet Paluh is working with Dr. Amitava Mukherjee to computationally model how amyloid beta contributes to AD by affecting calcium levels inside neurons. Calcium is critical to how neurons communicate with each other. Amyloid beta binds to channels on neurons, punctures neurons and enters cells, all of which have cumulative effects. This work begins to address a primary challenge in tracking AD progression, by linking bottom up molecular events within neurons to broader brain function.

Amyloid beta, the main culprit in AD, can be neutralized. Preclinical research done by the collaborative effort of research teams at the University at Buffalo and Tetra Therapeutics has developed a drug–called BPN14770–that blocks the effects of amyloid beta. This drug activates the body’s mechanisms that support nerve health and prevent dementia, even with the progression of AD. The study — led by James M. O’Donnell, dean and professor of the UB School of Pharmacy and Pharmaceutical Sciences; Ying Xu, research associate professor of pharmaceutical sciences; and Mark E. Gurney, chairman and chief executive officer of Tetra Therapeutics — was the subject of an article published in The Journal of Pharmacology and Experimental Therapeutics.

Mitigating the impact of Alzheimer’s disease

Another UB study has established that it may be possible to restore memory, even in patients with advanced AD. Funded by a $2 million grant from the National Institute on Aging (NIA), a research team led by Zhen Yan, a SUNY Distinguished Professor in the Department of Physiology and Biophysics, found that an epigenetic process known as repressive histone modification results in the loss of glutamate receptors, which are critical to learning and short-term memory.

Understanding that process has revealed a potential drug target — the enzyme that controls repressive histone modification. Initial testing of the enzyme inhibitor in animal models showed dramatic cognitive improvements that lasted for one week. Future studies will focus on developing compounds that penetrate the brain more effectively and are longer-lasting.

Clinical trials are essential to advancing AD research. Upstate Medical University is partnering with New Haven-based Biohaven Pharmaceutical Holding Company Ltd. and the Alzheimer’s Disease Cooperative Study in a national trial to evaluate a drug to slow the onset of AD. The investigational drug, troriluzole (BHV-4157), normalizes levels of the vital brain chemical glutamate, helping to prevent, slow down, and even improve memory and thinking problems that magnify as AD progresses. Upstate is participating with over 40 other sites in the United States in the study, called T2 Protect AD study.

The campus is also collaborating with Hoffman-LaRoche in a Phase III multicenter clinical trial evaluating the safety and efficacy of gantenerumab in patients with prodromal to mild Alzheimer’s disease. Gantenerumab is a monoclonal antibody that reduces amyloid accumulation in the brain.

Andrés Melendez, professor of Nanobioscience and interim dean of the College of Nanoscale Science & Engineering at SUNY Poly, is investigating how cellular aging (senescence) contributes to many degenerative disease processes and how the removal of senescent cells can delay age-related loss of cognitive function. In collaboration with Tom Begley, professor of Biological Sciences and associate director of the RNA Institute at the University of Albany with funding from the National Institutes of Health, the research has revealed an important role for selenium-containing proteins in regulating the senescent program. Their work suggests that interventions that maintain selenoprotein levels can delay cellular aging and, potentially, cognitive impairment and AD.

At SUNY Downstate Health Sciences University, Herman Moreno, M.D, associate professor of Neurology and Pharmacology/Physiology, is using functional MRI (fMRI) and other electrophysiological imaging methods to study genetically modified mouse models of neurodegenerative disease, including AD. His experimental approach is guided by the two core features of neurodegeneration and aging—differential regional vulnerability and synaptic dysfunction. His team uses mouse-fMRI to ‘pinpoint’ dominant sites of dysfunction. Once a targeted region is identified, the team employs slice electrophysiology with single and multiple electrodes and single cell calcium imaging to clarify the mechanisms of underlying dysfunction.

It is common scientific knowledge that cholinergic neurons are an essential component in human memory. A Stony Brook University team consisting of researchers from the Biomedical Engineering and Psychiatry departments received $4.3 million from the National Institutes of Health (NIH) to develop a strategy to potentially halt and reverse memory loss from cholinergic neuron damage. The researchers, led by biomedical engineer Christine De Lorenzo, will employ Positron Emission Tomography (PET), which can deliver a clear image of the cholinergic system in both mice and people. Data gathered on mouse brains exhibiting AD-like pathology will provide clues in understanding genetically similar cholinergic system issues in humans.

In related work, Dr. Sean Clouston, associate professor in the Renaissance School of Medicine at Stony Brook is incorporating PET and novel biomarkers to further examine the role of chronic stress exposure, aging and neuroinflammation to the onset of cognitive decline. This ongoing research is supported by a $2.4 million grant from the Centers for Disease Control and Prevention and by pilot grants to study neuroinflammation and tauopathy.

Dr. Clouston’s findings support the importance of long-term cognitive monitoring for individuals with chronic and/or severe exposures. Members of his lab are extending this work to identify emotional mechanisms that may slow the progression of cognitive decline. For example, emerging work by Dr. Erica Diminich supported by the NIA Alzheimer’s Disease Resource Center for Minority Aging will investigate how stress exposure and biological markers interact and potentially contribute to pre-clinical AD in at risk populations.

Additionally, Dr. Clouston is principal investigator of a $3.3 million NIA study to examine how life experiences, such as educational attainment, may enable individuals to cope better with brain changes associated with the onset of AD. Clouston’s results are consistent with the cognitive reserve theory, which suggests that activities challenging the brain increase its ability to stave off symptoms of AD. He also directs a $3.4 million NIA grant to study early signs of AD in World Trade Center responders. This study has built a body of evidence suggesting that responders with Post-traumatic Stress Disorder experience Alzheimer’s-like neurocognitive and neuromotor impairments at midlife.

Personality traits, specifically neuroticism and extraversion, are implicated in cognitive decline and risk for Mild Cognitive Impairment (MCI) and AD. It is unclear, however, whether personality is a pre-disposing risk factor for dementia and decline, or whether personality change is an indicator that an individual has progressed to impairment. Dr. Stacey Scott, associate professor of psychology at Stony Brook, leads a $2.2 million NIA grant that aims to use novel measurements of personality-related behaviors and states in everyday life that are recorded via smartphones to disentangle predisposing risk factors from indicators of impairment.

A failed experiment can offer just as much clarity as a successful one. UB researchers led by Dr. Kinga Szegeti, MD, an associate professor of neurology in the Jacobs School of Medicine and Biomedical Sciences, made a critical discovery when a treatment that was successful in animal studies failed in human trials for AD: a fusion gene that is possessed by 75% of the human population.

What does this discovery indicate? Doctors will have to adjust their treatment depending on the presence or absence of the fusion gene. Also, a dual approach may be necessary, with two targets: decreasing amyloid—the goal of most therapies—while increasing the resistance of neurons, which is the function of the fusion gene.

Early diagnosis of AD provides the best chance of benefiting from treatment. One of the major issues with current diagnostic methods is that they are not specific and accurate enough and are only applicable once the disease has already advanced. Igor Lednev, professor in the Department of Chemistry and an affiliated scientist in UAlbany’s RNA Institute, is working on a speedy, noninvasive test that can identify AD in its earliest stages.
Patented in 2018, his solution combines statistics and Raman Hyperspectroscopy, a method that employs lasers to analyze blood and fluid samples.

Lednev tested his technology on amyloid fibrils–protein deposits that are the one of the two hallmarks for AD. He analyzed and compared blood samples from AD patients, healthy controls and patients with related neurological diseases. The Raman technology achieved 95 percent accuracy. With an investment from SUNY’s Technology Accelerator Fund, Lednev is preparing the device for use in clinical trials and eventual commercialization.

A well-known fact about AD is that while the majority of patients are women, fewer women than men are diagnosed with MCI, which is considered a precursor to dementia. In a series of studies published in the journal Neurology, a team including Anat Biegon, Director of the Center on Gender, Hormones and Health at the Renaissance School of Medicine, has shown that healthy older women as well as women diagnosed with MCI have higher levels of amyloid and smaller volumes of a region (hippocampus) crucial for memory formation than men with the same levels of cognitive performance.

Assuming this may be related to the fact that women of all ages typically score higher than men on tests of verbal memory, the team employed memory test scores adjusted for sex. Their most recent study resulted in more women and fewer men diagnosed with MCI. If confirmed, these results could change the process for testing men and women for dementia.

Unchecked, AD cases are expected to reach 16 million by 2050, and related medical costs could skyrocket into the trillions. Immediate and effective action is necessary. SUNY researchers are hard at work probing the mysteries, developing treatments and creating a cure. Through strong collective effort and the use of SUNY campus resources, the widespread suffering caused by this disease can be alleviated.