Alumni https://blog.suny.edu/2021/02/purchase-cialis-from-us/ Profiles is an ongoing series highlighting successful graduates who, with a SUNY education, achieved interesting and influential careers.

Athena Lazo is a performer, contestant, and fitness buff. She graduated from SUNY Morrisville State College in 2011 with a Bachelors Degree in Journalism and Communication for Online Media. She has since cheered for the New England Patriots and competed on Dwyane “The Rock” Johnson’s The Hero.

In a 2012 interview, Ms. Lazo spoke with The Chimes, a Morrisville State College student newspaper, about her experience cheering the New England Patriots to Super Bowl XLVI:

On game day, Sunday, the squad will arrive at the Lucas Oil Stadium five to six hours early in order to practice before lunch and the game. Lazo says, while laughing, that I have been using this product for years. I have tried others but have not found anything that works better for me. Buy cialis overnight delivery online Canadian Pharmacy provides one of quickest and easiest ordering processes available oline today. her favorite part of game days, besides lunch, is the player tunnel. The squad lines up on the field and the players run through a large helmet onto the field. “It is such a rush. This year at the AFC Championship game, I stood there as the players ran through and fireworks shot off, and the crowd was going insane, and I started crying looking up at the sky,” she says. “This is my life? I am so blessed.”

Now retired from cheering, Ms. Lazo serves as the Community Relations Director for All-Access Fitness Academy. And as The Hero debuts summer 2013, the entire SUNY family takes the former cheerleader’s role in closing our eyes for a favorable outcome! This SUNY alumna’s uplifting spirit and career-focused drive will continue to propel her to achieve new and interesting heights.

1.   What sparked your interest in performing?

I started dancing at a very young age, and to be honest, I was petrified to even go across the floor in front of the parents during watch week. Somewhere along the line, my mom couldn’t get me to stop pretending I was Steve Urkel, singing out of tune and dancing around the house. I remember watching my momma get ready when I was little. She was always done up and so beautiful. I looked up to her and was so proud to brag that she had been a Patriots Cheerleader. She made me fall in love with makeup, and I think at that time is when I also fell in love with the stage. I love big hair, red lips & putting a smile on for hours. I may not have always hit the moves right, and I promise that I forgot my solo at every competition, but somehow, I figured out a way to wow the judges with some improv and too much stage presence.

I used these same self-taught techniques to earn a spot as a New England Patriots Cheerleader for three consecutive years, JUST LIKE MY MOMMY! Through 22 years of performing, I grew from that scared little girl in dance class to wowing 70,000 fans in the best stadium in the world, and it was all inspired by my mother. I don’t perform to be fake and I don’t like wearing a ton of makeup just because, but it sure is fun being someone else for a little while, as long as I can throw those sweatpants and slippers on after (haha).

2.   What aspect of your career do you like best?  Where do you see it going?

There is not a single day of work that I hate. Sure, everyone gets frustrated with their career, and let’s be honest, I still don’t know what I want to be when I “grow up”, but one thing I learned by working as a Community Relations Director is that everyday is a mystery. I am surrounded by the most amazing staff & friends at All-Access Fitness Academy, and I wouldn’t change it for the world. I am able to express myself and grow each day.

I’ve learned quickly that it’s not about how much money you make, but how much time off your amazing boss gives you to shoot TV shows and to go to the Super Bowl (haha)! I’m joking, but really, a career isn’t defined by what aspects of your degrees you use, or the car you drive, it’s defined by the smile on your face when you walk through the doors of your office. I am blessed to say, even during the most hectic times, our team pulls it off and that’s the best aspect of my career. I thrive in small environments; I hate big cities. I absolutely love where I am and where I work. The only thing missing is a family with an adorable husband. I hope to just continue living comfortably and humbly while moving on to the next phase in my life. I’ve worked some pretty cool jobs and traveled the world because of my talents, but it’s comforting to know I have a home in my “real” job.

3.   What is the most memorable experience you have had while a cheerleader?

As a New England Patriots Cheerleader, I’ve experienced so much. At times, the training seemed unbearable, but I was able to share 3 countries with 24+ amazing women, a Super Bowl in Indy, star in 3 calendars and 3 posters, and appear at countless promotional events. Little ol’ me stepped onto the field over 30 times to perform for a stadium packed with the greatest fans in the world.

All of this seems insignificant, however, compared to a Make-a-Wish event that I attended in Boston my second year on the team. Make-a-wish granted my big brother’s wish when he was diagnosed with a brain stem tumor at the age of 4. Because of this, the foundation has always been close to my heart. I was blessed to dance with a select group of women in front of the kindest individuals I’ve ever met.

At the 2012 Make-a-Wish Gala, these people granted tons of wishes by donating over $1 million dollars without even questioning it. This was, for sure, the most amazing experience I had as a Patriots Cheerleader.

Read More
16 Bits of Advice from Successful SUNY Alumni
For the past year, SUNY has collected dozens of success stories from our alumni. The graduates’ careers range from teacher to executive, to scientist to…

4.   What did you learn while a reality show contestant?

What stands out the most during the time I spent filming The Hero in Panama is probably the first time I met Dwyane “The Rock” Johnson. Being on camera, although it may not seem like it, is grueling. Long days seemed to never end. I knew what I was signing up for when I was offered a spot on the show; I knew it would be hard work, and trust me the overwhelming feeling I get seeing just 9 of us in those commercials on TNT makes it worth it.

I will never forget that feeling of nervousness I felt standing in front of The Rock, alone, on a rooftop. I was the first contestant in the house to come face-to-face with DJ. I’ve been around celebrities & professional football players; I can hang, but it’s different when The Rock is standing in front of you. It was such a cool feeling knowing that I earned my way to that rooftop, & I’m good enough to work with one of the greatest in the industry!

5.   Overall, how did your college education help prepare you for life and endeavors?

I take pride in how unstoppable I was at Morrisville! My grades put me in Omicron Delta Kappa. I was elected President of Student Government after serving as Vice President. I was an RA & RAA President. I happily edited for the Campus News section of The Chimes and was a Certified Elite Leader & danced with the African Student Union Black Alliance Dance Team, as well.

At Morrisville, I learned that it doesn’t matter your age; your voice matters. You can be a leader in any environment with the right approach. Bryan McDowell & the entire Journalism Department gave me a head-start on my career by throwing me into real-life situation. They didn’t just grade a class paper–those professors made me interview senators during election time. I was a stringer for the Norwich Evening Sun my first semester on campus and had to fight through the fear to earn my grades. You can’t find that hands-on experience anywhere else. I transferred to Morrisville after switching colleges a couple times, & I am blessed to have found a home on that campus. (Man, do I miss making shakes at Jazzy Joz! BEST JOB EVER!)

You won’t get anywhere sitting around and barely making those grades. Get up & put yourself out there. I’ve failed–I’ve failed plenty of times, but it’s putting on that NFL uniform and hitting the turf, and seeing myself on TV that makes it all worth it. I GOT MYSELF HERE AND YOU HAVE TO BE YOUR OWN MOTIVATOR, AS WELL! I was able to balance the fun and the partying of college with a nearly perfect GPA; it’s possible. Push yourselves and create your own destiny. Don’t forget where you have come from and, above all things, always be there for your family and friends. 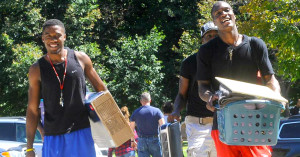