It’s football season again and thousands of athletes are suiting up across the nation to play one of the most popular sports in America. From recreational leagues to high school and college discount propecia propecia teams to professional-level organizations, the sport is played in varying intensities but with one very real danger: concussions. In fact, in the season opener for the New York Giants, starting cornerback Prince Amukamara was sidelined because of a concussion.

According to the Upstate Concussion Center at the Institute for Human Performance of SUNY Upstate Medical University, a concussion is a mild traumatic brain injury that occurs when the normal functioning of the brain is disrupted by a blow or jolt to the head.

So that SUNY can best protect its student-athletes and continue to reach out to younger students, its two concussion research centers, at SUNY Upstate Medical University and the University at Buffalo’s Concussion Clinic, actively investigate concussions and concussion-related illnesses. Acute awareness in order to teach others of the prescription of levitra danger is part of the mission.

Research increasingly shows the lasting negative effects of a concussion on a person’s brain. This has triggered the Centers for Disease Control and Prevention to now recognize sports concussion as a significant public health issue and the National Football League to invest tens of millions of dollars into concussion research.

Playing football is not the only way to get a concussion—nor is playing the sport an imminent danger. However, the nature of the sport (heavy and sudden contact) lends more risk than other sports, like soccer or baseball. According to the American Association of Neurological Surgeons, the likelihood for suffering a concussion while playing a contact sport is estimated to be as high as 19% per year of play.

It is important to note three potential variances with these odds. First, they are merely estimations. Although we use conservative risk, the intensities of play vary by age, location, position, and regulations. Furthermore, the risk of an NFL player may be greater than, say, a high school player because of the intensity of play. Finally, a player who participates in high-level collegiate or professional play will have likely started much earlier than sixth grade.

To compound the risk for committed players, according to the Association, the chances of being subjected to a concussion in football is three to six times higher in players who have had a previous concussion.

According to Brian Rieger, Ph.D., a SUNY Upstate psychologist specializing in concussion and brain injury:

There is no such thing as a mild concussion. While the immediate symptoms of a concussion resolve quickly, some cases can pose significant health risks. Concussion sufferers can have lingering problems with memory, emotion and other cognitive functions. The best way to prevent a concussion is to wear protective equipment and to avoid high-risk situations. Once an athlete has a concussion, efforts shift to minimizing the chances of long-term problems through proper management of the injury.

Tracking and scanning subjects and performance is only half of the equation, however. The fact that a concussion happens in the first place implies that physical contact has been made. With increased protection and by taking preventative measures, players may avoid the concussion altogether.

Part of the tens of millions of dollars that the National Football League has invested in research is to develop safer helmets and other protective gear so that players like Amukamara may be best protected. Major League Baseball has also recently headed calls to protect its players more and the National Hockey League is under constant pressure to provide more relief, especially following Sidney Crosby’s repeated concussions and foreseen early retirement because of it.

One thought on “SUNY Research Aims to Reduce Impact of Concussions” 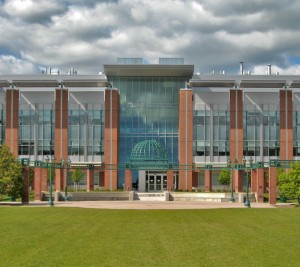 SUNY Broome Community College
January 31, 2023
Alumni cherish the experiences they made while in college. But sometimes those experiences don't come to be and they are...
Shay Gauthier
July 5, 2022October 26, 2022
Energy, sustainability, technology, and so much more. We so frequently see advancements in these fields that have major impacts on...
Big Ideas
May 3, 2022October 26, 2022
Student athletes face many demands in today's competitive environment. In addition to the realities of everyday student stressors—whether that be...
Julie Maio
April 21, 2021April 22, 2021
Inspired by a student movement in 1969, government officials recruited Denis Hayes, an activist, to kick off the first Earth...
Julie Maio
April 7, 2021
Hosting events during the pandemic has spurred creative technological solutions to ensuring the safety of attendees. For many organizations, they...
Winnie Yu
November 30, 2020January 1, 2021
Approximately 5.8 million Americans are living with Alzheimer’s disease. An estimated 30 million Americans have type 2 diabetes. Both numbers...