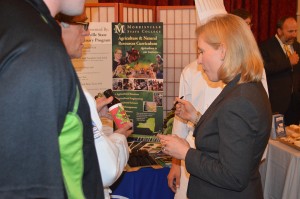 U.S. Sen. Kirsten Gillibrand checks out some of the products made by Morrisville State students during New York State Farm Day. The college showcased an array of food samples during the annual event which boasts New York State agricultural products.
Photo by Corey Hayes

Morrisville State College recently displayed some of its tasty fare in Washington, D.C.

The event, sponsored by U.S. Sen. Kirsten Gillibrand, brought together producers of New York’s award-winning wines, farm-fresh products and seafood, as well as leading restaurateurs from across New York State, to showcase some of New York’s very best.

“As a member of the Agriculture Committee, I am focused on improving the health of our economy and the health of our families,” Gillibrand said. “From rising childhood obesity and outdated nutritional standards to the economic crisis facing our dairy farmers and specialty crop farmers, agriculture issues in Washington affect families in every corner of New York. Strengthening our agricultural sector and promoting good nutrition for New Yorkers are essential to our long-term health and economic growth.”

Morrisville State’s menu, designed by Beadle using local products also used in the college’s dining centers, included a variety of delicacies produced on-campus or locally with help from Morrisville State students in the culinary arts management and restaurant management labs along with staff from the Copper Turret.

Among the indulgences presented by the college were those that contained products made by agricultural business development students.

“We incorporated the strawberry maple syrup that they created into the vinaigrette dressing for the salad and also into the maple strawberry mousse cake,” Beadle said. “We also used their apple mustard to top the kielbasa crostini.”

Other products included value-added products made through the Morrisville Fresh LLC, a student-operated business managed by agricultural business students.

“This event is an important way to highlight our farm-to-fork efforts to people in Washington and the Senators’ office and to demonstrate how our students in different curriculums can benefit from working together on projects,” Beadle said.

“I believe we were also successful in demonstrating to SUNY while representing them, how well we collaborate among departments,” he added. “We were able to tell our story to a number of visitors how many products we garner locally and how we incorporate them into the menus at the Copper Turret and throughout the campus.”

“This event gave young agriculture entrepreneurs the chance to tell their story at the Capitol about the important role agriculture plays in the modern food system,” Hayes said. “It is critical that we all understand that agriculture plays a significant role in how our food system operates, and it is opportunities such as these that allow us to tell our stories and connect with the consumers.”

The event was held in the elegant Senate Kennedy Caucus Room at the crest of Capitol Hill. Since its inaugural launch in 2002, New York Farm Day has become one of the most popular events on Capitol Hill.

Morrisville State’s menu and the farms featured were:

Morrisville State sets the world in motion for students. Curriculums are enriched with applied learning and pave the way for opportunity at both the Morrisville and Norwich campuses. An action-oriented, interactive learning lab, the college is a national leader in technology. Lauded for its exemplary, innovative and effective community service programs, the college was named to the 2012 President’s Higher Education Community Service Honor Roll. Visit www.morrisville.edu to experience, Morrisville in motion.