While the COVID-19 pandemic has hit our world in unimaginable ways that have online levitra tablet caused fear and worry for many of us, the SUNY Family has banded together to help out those in need in a number of ways. From 3D printing face shields, to participating in timely research projects, to providing community PPE and support, the #SUNYTogether initiative is going strong and shows no signs of stopping. One such effort that exemplifies the SUNY spirit is called Food for the Frontline (FFTF), and is being led by four SUNY alumni from across our system. This organization, as the name denotes, is dedicated to providing meals to healthcare professionals and other employees in hospital systems putting their lives on the line to take care of those infected with COVID-19.

To learn more about the organization and how it came to be, we had the chance to speak with all four alums about their participation in FFTF.

Marlowe Bamberger is a University at Buffalo alum and is the initial creator of FFTF. Once the mandate to stay home was put in place, she saw how businesses, and particularly restaurants, were closing and “felt their lack of presence overnight.” As time went on, these restaurants and eateries transitioned from eat-in to take-out and money order for buying levitra pick-up. Marlowe shares, “simultaneously, the news was reporting how many long, hungry hours the front line and essential workers were working.” She felt called to do something, and it became a perfect “marriage” – she could stay home, ask friends and family to donate to the cause, and “use the money raised to spend at local restaurants to purchase orders of 50, 100, or 200” items at a time. At the onset, these orders were delivered to Manhattan hospitals wherever there was a need, but it has since expanded to hospitals throughout the city.

Donations Grow From Few to Many

Part of that expansion came from utilizing cialis 40mg social media to get the word out about this effort; Marlowe posted on her personal Facebook page asking people for donations. She also tapped into her connections involved in healthcare and food service, and found that within hours she had raised $1,000 and sent lunch to Lenox Hill Hospital from a local restaurant. As time went on, Marlowe asked others to lend their time and energy from home to spread the word. This caught the attention of Michele Margolin Seiden, a graduate of Binghamton University, and she quickly began helping FFTF.

Michele shares that she got involved heavily with FFTF due to “feeling a high level of stress and concern, and uncertainty and unease about what was happening.” She also “felt a strong sense of needing to find a sense of purpose,” especially when it concerned supporting people who were directly affected or working on the front lines. As a longtime New York resident, Michele noted how this time in our history feels similar to her to right after the 9/11 and Hurricane Sandy tragedies struck New York, and especially New York City. After these instances, Michele also felt called to volunteer with organizations in roles such as a case manager and co-chair of a relief effort that involved fundraising.

She drew from these experiences when starting her work with FTFF, but a recent stint of spending time in the hospital setting due to a family member being ill really inspired Michele to help those on the front lines. “I saw firsthand what these healthcare workers do. Tireless, selfless, extraordinary people are in the hospital. It was one of those beautiful realizations. Marlowe had started this initiative, and it all came together what I needed to do: show up for these front line workers whom I personally owe a debt of gratitude.” Since Michele knows a lot of people involved in the restaurant business, she focused a lot of her time contacting individuals who could help through emails, texting, phone calls, and social media.

A few weeks after Michele joined the FFTF team, two more SUNY alumni reached out to Marlowe about expanding the efforts. Florie Huppert, a Binghamton University grad, and Beth Balsam, a graduate of UBuffalo, and started up the mission for Brooklyn hospitals to provide meals to healthcare workers and other essential employees fighting the COVID-19 epidemic. Beth had already started the work with reaching out to Brooklyn hospitals when Florie came on board, and the two “became fast friends,” as Florie shares. Similar to the Manhattan effort, Beth and Florie contacted restaurants and other food eateries to see if they would be open to donating beverages and foods to local hospitals. For both arms of FFTF, they have been partnering with restaurants to do all deliveries to abide by social distancing measures.

Even though FTFF volunteers aren’t present for the deliveries, one of the major things that Florie has noticed is “how thankful people are to receive these gifts and how meaningful it is to them.” She goes on to say that another important element to their operations is spending the time and energy to make sure that “we’re delivering to specific departments and drilling down to where the need is.” In doing so, the deliveries are getting to the people who need them the most and that their funds raised from donations are being spent in the best ways possible.

Beth also speaks to this endeavor. “We are focused on targeting less served medical staff and supporting smaller restaurants–both groups could not be more thankful for our efforts.” One exchange that particularly stands out in Beth’s mind is when a nurse called her in tears on Easter Sunday asking if FTFF could deliver food to Brooklyn Hospital Center. She recalls, “We dropped everything and went running, the amazing Vinnie’s Pizzeria on Bedford Avenue, closed their doors and made 40 pizzas in two hours for us to deliver.”

To date, the organization has raised close to $50,000, has delivered roughly 9,000 meals and snacks, as well as hundreds of cases of water and Gatorade and nutrition bars to hospitals throughout the city. Looking toward the future, Marlowe notes that this effort will be “ongoing as long as the funds come in and the healthcare workers are unable to feed themselves due to restaurant closures.” She also shares that since these workers have to scrub in and out every time they need to grab a simple meal or cup of coffee, a lack of PPE would prompt FFTF to remain in business as well.

While the primary function and positive outcome of FTFF is helping front line workers and essential employees, another element of these four alums coming together that Florie loves is that “[we’re] all public school parents giving back to their communities.” She notes that “there’s something to be said about what a public school [education] gives you, and why we’re so conscious.” Florie attributes her experience with public school education, including SUNY, as the driver to giving back and “being thankful to gifts and sacrifices that people are making.” 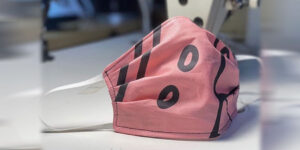 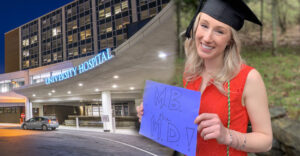 Next post From Medical School To the Front Lines of Pandemic, a New Graduate Shares Her Story

Winnie Yu
October 2, 2020October 6, 2020
For years, the Centers for Disease Control and Prevention has advised anyone over six months of age to get a...
Julie Maio
August 27, 2020
The way people schedule and attend doctor's appointments has been altered during this time of COVID-19 and social distancing, and...
Winnie Yu
June 5, 2020June 5, 2020
A passion for health care. A love of technology. A talent for math and science. And the courage to be...
Taras Kufel
April 30, 2020
One volunteer project. 100 volunteers. 6,500 masks and counting, produced and delivered to hospitals. All while respecting social distancing measures....
Winnie Yu
April 15, 2020April 15, 2020
Protective equipment like face shields have become essential to medical personnel caring for patients with COVID-19. With its 3D printing...
Winnie Yu
March 27, 2020March 27, 2020
For medical personnel at the frontlines of the COVID-19 pandemic, personal protective gear like face shields and masks have become...